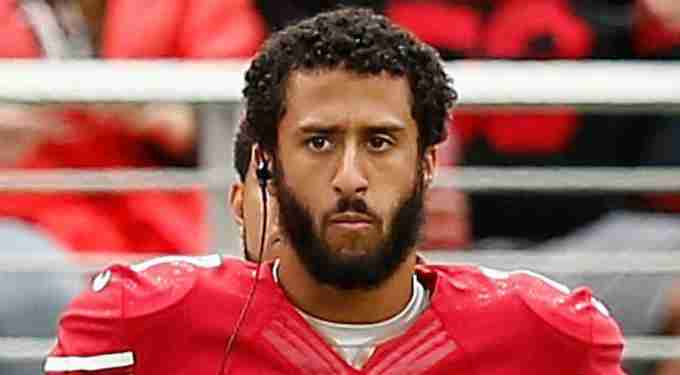 Both the left and right have it wrong. I’ll explain both. The left is easiest, so let’s start there.

They’re suckers for anything and all things that have any shade of besmirching the inventors and creators of all and everything you are: the white male of the human species. There’s no contest and apparently, even a $125 Million contract for a blackish football player is not enough to erase sour grapes.

Fait accompli, Earth. White men did nearly all of it all and you can’t un-ring that bell. C’est ce que c’est.

So you have the hand-wringing and tears. The SOCIAL JUSTICE!!! George Takei, never at a loss for dumb, non-sequitur words out of context wrote:

As I child, I recited the Pledge of Allegiance from inside an internment camp, so I understand some of the deep emotions surrounding this.

So that about covers the left. Just as fucktarded as always.

The right is being just a bit stupid…just as they stupidly focussed on Hillary Clinton’s “treason” in setting up an email server in her own home to conduct state business. They focussed on the bone she tossed them over classified information and ignored why she set up the server. It was to enrich herself, Bill, and their RICO “foundation.” Those were the deleted emails. She left the classified secrets for the stupid God & Country, patriotic Republicans and their millions of sycophants, knowing her constituency is too clueless to care. The left is as dumb as she knows they are. I digress.

Kaepernick is a lousy employee.

Beyond his poor performance on the field the last couple of years—which is dismissible because that’s the game and it’s all covered by risk-reward and contracts—he shit on the essence of the game and the brand.

The NFL is a brand that is wholly wrapped up in America, patriotism, its defenders on battlefields, respect, honor, toughing it out. And each team is a microcosm offshoot of that, to draw in localized aspects of America. The steel workers of Pittsburg. The meat packers of Green Bay. The gold miners of 1849 that had a mainstay in populating and developing the west coast. Those who braved snakes and gators in swamps and everglades to finally bring dolphins to the south coast of Florida….

Its customers, NFL fans—the ones who shell out the billions annually for this great spectacle of 17 games and a playoff series that culminates in a winner-take-all final game, so characteristically and properly dubbed The Super Bowl, harkens back to so many things that comprise the great, naturally multi-cultural experiment that is quintessentially American—know what they want, and Kaepernick is a mere pawn in it. Fans don’t begrudge his millions, and even if he’s been off his game. They are so largely understanding, forgiving, and pathetic suckers for redemption.

It’s all part of the game, the culture, the wonderful ups and downs that span years and decades…all to the delight, dismay, and quotidian depression that is the health of the football fan.

Kaepernick decided to take a shit on that the other day and is getting everything he deserves.