What’s not news—or certainly ought be news to no one—is that everyone is biased, everyone feels a need to believe that their bias—unlike everyone else’s—is for all the right reasons—including, ironically enough, objectivity—and a big chunk of life is an endless struggle in seeking confirmation of just how sound are all of our many biases on just about everything.

So I always begin with that as the given. We’re ego-driven creatures and that’s part of it. Just accept it, but before you can accept it, you must recognize it in yourself and others. But accepting it as the given is not the same as engaging in a personal struggle to keep it under control.

…I keep hearing a lot about this new book, Ego Is the Enemy, by Ryan Holiday.

I’ve never read anything by Ryan Holiday, but lots of people who occupy this so-called Trust Agents space on the Internet—these are the people you trust to tell you what to do, even though they may be lying—tell me it’s an essential book to read. And, from what I gather, all these trustworthy people have always read everything Holiday has ever written since the very first time, when he asked them to “Trust Me, I’m Lying,” as a confessional from an admitted media manipulator.

The last person to tell me to read this latest was Kevin Rose, in his monthly newsletter. It’s a good newsletter, by the way. Trust me, I’m not lying, and I’m not biased—even though I’m quite fond of Kevin’s wife, Darya. …Seriously though, I do like the newsletter. It’s short, clean, surprisingly modest, and quiet.

So I went to Amazon yesterday to check it out. Of course, as most people do, I began reading the reviews.

I always read the reviews. However, I never start with the 5-Star, or those other people found “most helpful” (helpful in what way; confirming bias in one way, or another?). Rather, I always start with the 1-Star. That’s less bias confirming because, if I’m there to potentially buy a book or any other product, presumably my bias is already leaning towards a purchase (because it’s been suggested by people I trust, who aren’t lying to me; no bias there…). As you can see, bias management gets to be a pretty tricky thing.

I’m not just looking for any 1 or 2-Star reviews, either—many better classified as entitlement whining than “review.” I’m looking for well written, well argued reviews, whether the intent is to dissuade purchase or to set the record straight about how wrong the author is.

I was surprised to read a number of very informative, well-written 1-Star reviews for this book. Here was my favorite.

This book is so terrible that I nearly threw it against the wall after the prologue. I am generally a fan of Holiday’s books, however he is criminally misinformed on the role of ego and the ideas he proposes in the book are downright dangerous. In Holiday’s world, we’d all be a bunch of lifeless innovators with no sense of self-worth, identity, pride or confidence since we have worked so hard to erase these areas of our psyche that are paramount to our general wellbeing.

The author erroneously conflates “ego” with hubris, or an overabundance of misguided ego that is indeed counterproductive, but hardly mentioned in the book if at all. Ego itself is not the enemy; hubris is.

Of course we should always be seeking to tame our ego lest it turn to hubris or some other mutation, but to kill it completely as the author irresponsibly suggests is a step toward making us less human. Holiday goes on to suggest that we should replace the ego with humility. Give me a break. While humility, like ego, is also critical to our wellbeing, we should not seek to completely replace one with the other. A balance of the two is critical and in fact should be pursued. This book may help the top 1% of the most crazed egomaniacs among us, but for the rest of us it’s a colossal waste of time and ultimately bad advice. I will be returning it to Amazon if it doesn’t end up in a bonfire before that. [Emphasis added]

So there’s a few ways I’ve struggled with all of this my own self, but hubris has ranked number one. And hand-in-hand with that, is intransigence. It’s a very bad combination, and this is at the very core of why I have written so many times on this blog that the better way to approach all the many biases in your life, which you can’t really do much about—it’s baked in the human-social cake—is to flat out tell yourself and everyone else that you’re wrong about everything, all the time, and so are they.

…That the more enlightened path is endless struggle toward being just a little less wrong every day, or every step of the way. The truth is, you can never be truly certain when you’re right, only when you’re wrong—such as in an utterly failed experiment, or falsified hypothesis.

And so this is what makes The News laugh out loud funny. First of all, what hubris: “The News.”

Yea? Nonsense. At best, it’s selected reportage and at worst, someone’s biased screed about what they happen to find important.

You know what’s funniest of all, though? May I suggest: YOU?

That’s right, and there’s two parts to it.

There really is no objectivity in life. Media outlets are for-profit businesses with customers. Their bias in what to “report” and how to present it is a reflection of the preferences of their customers…just like Ford’s product lineup and styling is a reflection of the bias of Ford loyalists for Ford and often, against Chevy. Yea, there’s often two biases at play—the one that’s for something and the other, that’s against something else—and those customers who’re both are the most valuable.

Is it fraud, then, for a media outlet to claim that it’s objective; that it’s “fair and balanced?” Is it fraud for Ford to tell you emphatically that they make “the best” cars and trucks, or Papa Murphy’s to tell you their ingredients are “fresher than anyone else’s?”

And how about public broadcasting that relies on grants, public money, and fund drives? Is it fraud for the Catholic Church or any other denomination or sect to tell you that they’re the only true path to heaven?

…Yesterday I was outraged over this image showing a remarkable level of hubristic bias by Steve Benen and MSNBC, and expressed a fair amount of that outrage on various Facebook and Twitter. 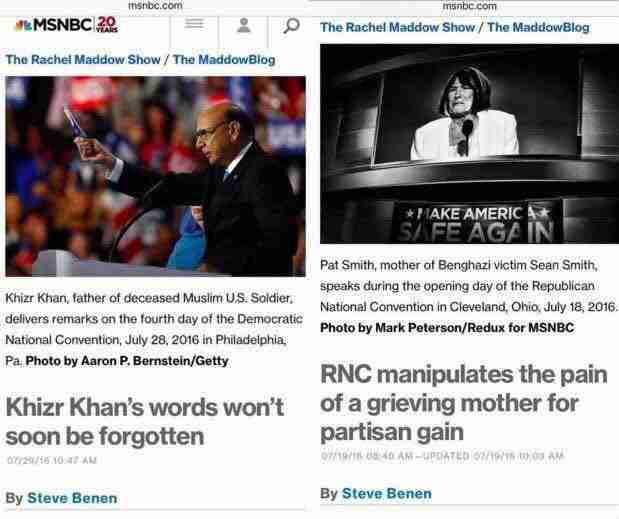 So today, I just wrote all of the foregoing to put it into a wider perspective; be what seems like a little less wrong about it today, than yesterday.