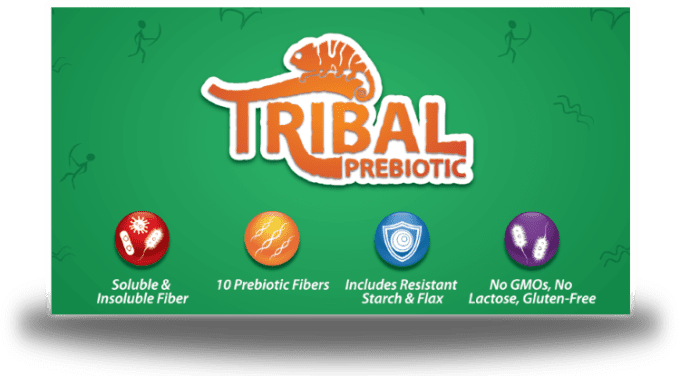 I could not be more pleased than to finally tell you about this, available soon, exclusively through FreeTheAnimal.com. It’s from Karl Seddon, inventor and manufacturer of Elixa Probiotic, of which we’ve talked about so much over the last couple of years. It’s Tribal Prebiotic.

You may recall that nearly two years ago—and after chewing on it for the year previous, and even collaborating with a couple of people on the possibilities—I began experimenting with my own prebiotic powder blend, “code named” Animal Farts (which would not have been the name in an actual release). It basically contained a bunch of different prebiotic fibers in powder form that I had gleaned from commenters on the blog having tried.

But not very long after Karl brought me Elixa Probiotic, we began a discussion about a prebiotic powder that he would manufacture in the same facility where he manufactures Elixa. And, so began a long collaboration and he’s tested a “million” blends himself and with volunteers there in the UK, and now it’s almost ready to ship!

Here’s the launch page as it stands now, and you’ll be able to sign up to be notified of its availability, which will also be announced here the second it’s ready to ship.

And as an added bonus, you can watch Karl’s 30-minute video about FODMAPS right here.

Tomorrow or the next day, I’ll be posting another installment of the amazing testimonials we’ve been receiving from Elixa Probiotics users.

Update: Here’s a new article that substantiates the importance of dietary fibers or prebiotics:

New Studies on the Gut, Microbiome and Dietary Fiber: 25% Reduced Glucose Response to White Bread, Fiber for the Health of Our Youngest & Oldest