Why Are The Low-Carb and Ketogenic Movements So Intent On Developing a Dishonest, Sycophantic Following?

A few days ago there was a New York Times article that made low-carbers palpably giddy and vindicated: How the Sugar Industry Shifted Blame to Fat. I was so amused seeing all the high-five references throughout the sphere, I didn’t even bother to read the article itself.

The documents show that a trade group called the Sugar Research Foundation, known today as the Sugar Association, paid three Harvard scientists the equivalent of about $50,000 in today’s dollars to publish a 1967 review of research on sugar, fat and heart disease. The studies used in the review were handpicked by the sugar group, and the article, which was published in the prestigious New England Journal of Medicine, minimized the link between sugar and heart health and cast aspersions on the role of saturated fat.

Even though the influence-peddling revealed in the documents dates back nearly 50 years, more recent reports show that the food industry has continued to influence nutrition science.

In other words, sugar and fat had a war, and sugar won. Perhaps ‘fat’ needs a trade group. Look, if you’re going to play, then play. Don’t cry. Keys kicked your asses. Tough luck.

The question is, if you think he was dishonest (that may not be actually true), then why double down and be just as much or more dishonest?

…Last night I caught a Facebook post by Andreas Eenfeldt, Diet Doctor—who now claims to be the most popular low-carb resource on the Internet (sorry Jimmy). But, the blog post is, quite frankly, double-face-palm stupid. Why does he want to lie like that? He says:

Sugar was the link. Yudkin was right. 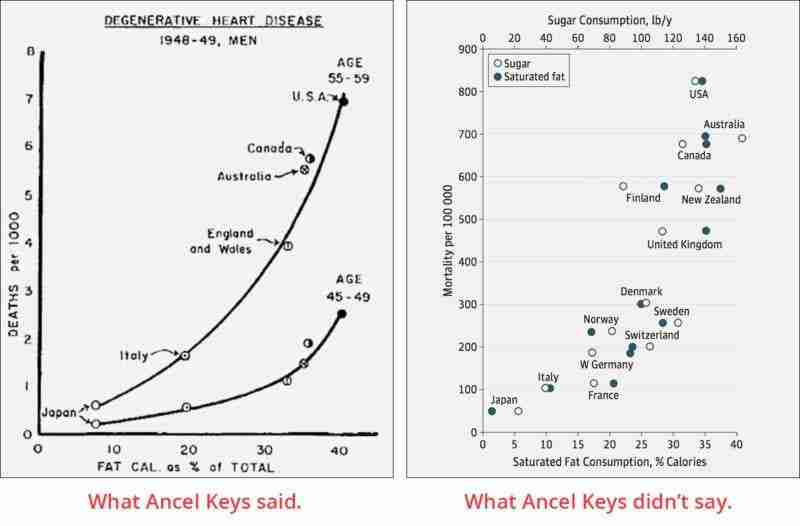 I’ll just quote what I wrote at the time, last night, because it ought to require nothing more for such a dumb-ass, dishonest, pablum-load of twaddle.

This is mind blowing and illustrates the deep, deep confirmation bias in the Low Carb community at large.

Two very big problems with Diet Doctor’s “analysis.” And if you look at the comments and replies on the FB post so far, every single comment buys this entirely but for a single comment.

And this is the real shame about this sort of bias on both sides. It keeps both sides from coming up with a more likely scenario: that the COMBINATION of high fat AND high carbohydrate is what’s the bad idea.

They likely ought to have an inverse emphasis in the human diet, on average, with protein making up the 20-30% balance.

Duh. Beyond that, and emphasizing the context of predominately whole foods, it’s really just a matter of preference and what you can stick to more on average.

Here was the sole and single dissenting comment out of  lot I saw last night:

Brett Graham: Ancel Keyes did not cherry pick his data. If he did he could have cherry picked 6 different countries to better support his hypothesis. He even explained the reason for his choices; he chose the countries with the most reliable data.

As to the graph on the right, it’s data from 1969, not from 1953. And by the way, why are we waving this graph around like its some kind of victory for fat? Look at the data points; fat correlates better than sugar for CVD. So correlation doesn’t equal causation except when it satisfies your biases?

Alright, this sort of self-serving dishonestly for the sake of a parade of sycophants automatons is not worth any more time. Shame on you, Andreas. Why do you feel the need to lie, like that?

I’ll conclude: in nature, you predominately experience foods that are hight fat and low carb, or high carb and low fat. Go figure, you bunch of dummies.