Since it’s been raining and snowing here for a week, virtually non-stop but for a single day’s let up, and promises to continue for another week (It’s close to flooding levels in Reno, Nevada—my hometown—over the hill), I thought it was time for a pot of clam chowder.

Sorry, no picture. You know what the New England version looks like.

I have a lifelong love of clam chowder and am of the opinion that roughly, there’s almost no such thing as a bad one, just that some are way better than others. My chief complaints are: 1) a ridiculous potatoes to clam ratio (clam-flavored potato soup with clam bits), and 2) too thick; or worse, wallpaper paste.

So I made it in under an hour today—having sourced ingredients this morning—right before Beatrice headed back to her place in Bay Area for the week of work, leaving me with the dogs (we fight over who gets them during the week). 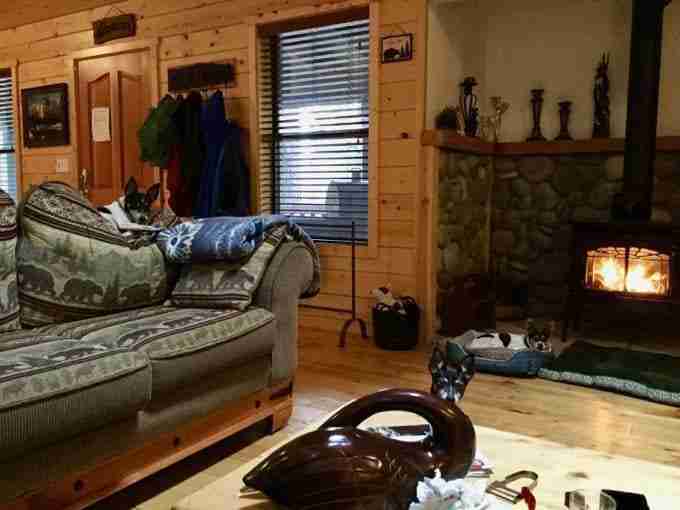 Dogs? Did you say dogs?

Here’s how it goes, my mod version. The recipe calls for 1/2 C of rendered salt pork (or bacon), but I don’t want that flavor (that goes in potato soup). It also calls for H & H, but I use whole milk for a slightly soupier consistency and less fat, too.

There are many, many NECC recipes and they are more similar than different. I think what sets this one a bit apart is the heavy amount of clam juice.

Get your clam juice in the main cooking pot and get it boiling and reducing to intensify clamish flavor. Reduce by 1/3-ish. At the same time, drizzle cooking oil (you would use the pork fat if included; I use EVOO since it’s not) in a pan and sauté your onions and celery for about 5 minutes or so on med-H. Add those to the clam juice reduction, along with the potatoes and parsley (a half handful of chopped white ends of a bunch of green onions adds a nice touch). Add the seasonings too.

Reduce heat to med-L and let them simmer 20 min as you make a roux of the butter and flour, and slowly add the milk. Sir continuously to light boil. When the roux-milk begins to boil, add to the main pot and bring the whole thing to a boil which should take less than a minute.

Drain your 4 cans of clams. Soon as the pot boils, add the clams. Let it just come back to a boil once again (1-2 min), shut off the heat, add salt and pepper (or even a little garlic powder too) to taste, leaving room for additional seasoning by the bowl. If you were working with raw clams, you would want to lightly sauté them in butter for a minute or two and do the same, from then on. With caned clams, they’re pre-cooked and all you want to do is reheat them. Do not cook. They will get rubbery.

Serve with fresh chopped green ends of your bunch of green onions.