A little something for everyone, today

• I suppose that since it’s Super Bowl Sunday, I ought to start off with that.

All of you go fuck yourselves.

I’ve been shaking my head so much lately that I’m beginning to have some concern over acquiring some sort of repetitive stress injury. On a trip to the market this morning I was just thinking about it. Shaking my head is mostly all I can do, anymore. My level of outrage has cried wolf so many times, it’s become a self-aclamating new normal and I have little left to give it.

Cue feminist outrage over this. Crickets.

On the issue of Trump’s executive order temporarily barring citizens from seven of the many Arab countries that prohibit Israeli Jews, now temporarily restrained by a federal judge, since when is the US Constitution a suicide pact? In what way do the civil protections therein apply to non-citizens outside this country; indeed, take precedence over them?

You can argue all you want about the effectiveness of the temporary ban—public policy is always imperfect—but it’s difficult to argue that this is not a reasonable measure to take, and nobody’s “rights” are being violated. And, of course, there is executive precedent, and whether or not that’s relevant in the forthcoming judicial proceedings, it certainly does, once again, as always, expose the uniquely odious hypocrisy of the political left.

My prediction is that it will move through the system and the left will, once again, lose. Because they are nothing but losers, they keep doubling down on it, lose more, resulting in increasing levels of outrage on increasingly many things. It’s now far easier to draft a list of what the left isn’t outraged about (e.g., Primitive Islamic Barbarism) than what does outrage them (e.g., Anything and Everything Quintessentially, Proudly American).

To that last point, here’s a worthy read in The Washington Post by Navy War College Professor, Tom Nichols: Chill, America. Not every Trump outrage is outrageous. 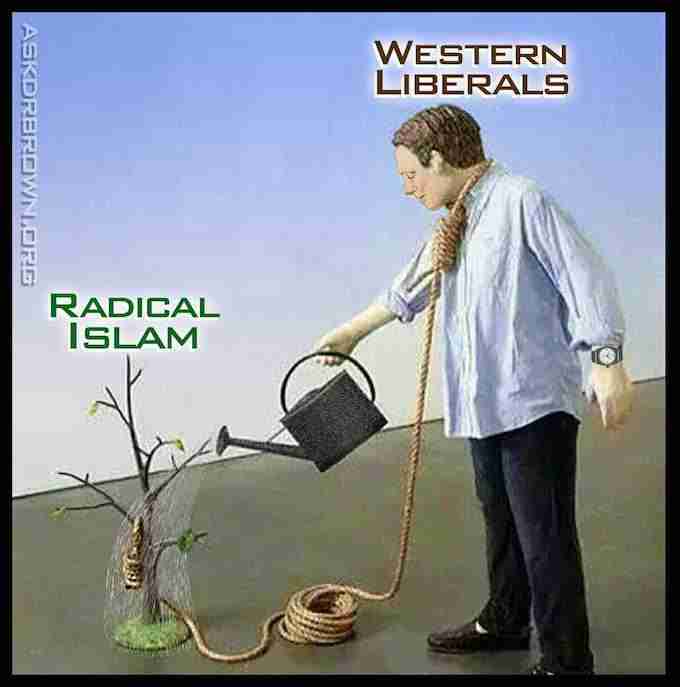 …Specific to Donald Trump, one of the reasons I predicted his eventual win over a year ago, after seeing his first couple of Republican debates and how the Republican establishment was aligning against him while Democrats scoffed at the mere idea, was just that. He was actually more like a third-party candidate running against both parties, only with more brains than the cumulative mass of Libertarians and Greens. And he was doing so on a populist theme that has a foot in both camps. Since winning it all, he has moved to tame the full-on populist theme by appointing a mostly conservative cabinet, demonstrating at least some political allegiance to the party banner he ran under.

Something for everyone, but different because he remains his own man—something those who voted for him love, while something both party establishments hate, which endears him to many even more.

On those themes, see Matthew Continetti’s piece in National Review: Trump Short Circuits Washington – The open war between the establishment and President Trump.

What a curious spot in which I find myself, having for years ridiculed and mocked Western religious institutions. …The idea of faith in general—only to find that the misguided ideas and actions of the left represent the most faith-based and viciously allegiant cult of all!

Consider the irony over making a big deal over people’s ideas of some supreme being in an Enlightened society—that upholds the right of peaceful people to choose their own variation or style, or none at all—while at the same time, aligning with so-called atheists whose God, in practice, is a leftist, oppressive, egalitarian, secular State under the banner of “social justice,” with all its saints, angels, devils and demons intact; where, so vitriolic is their disdain for any sort of classically liberal enlightenment under various banners of tame, faith-based inertia, that they will riot in defense of the most oppressive, barbarian religious institution Earth has ever seen: Islam.

Well, I stand in League, then, with the various flavors of American-syled religious faith. While I can quibble with their faith-based ideas and the fundamental reasons on which they base their conclusions, I see a lot of people with their hearts in the right place. I see no such thing from the left, but rather, a desire to impose their “social justice,” no matter how many hundreds of millions of corpses it takes. The Bolshevik revolution and everyone after has been leftist, “social-justice” motivated blood baths, their roots going all the way back to the terrible French Revolution, the birth of secular political leftism.

Staying on the political and religious themes for a while, I have been utterly shocked during the last year of this historic political process to observe how many prominent diet and health gurus and personalities are lefty loons of the highest gobsmacked order. Embarrassing. More head shaking and puzzlement, over how one can trust their honesty and forthrightness in any aspect of diet and health when they don’t have the capacity to see through the thinnest of propaganda and bold-faced lies—all while exposing a woeful ignorance over all things American civics, judicial procedure, enumerated powers, due authority of the executive branch, and the list goes on long (see  Nichols, again).

I probably know most of the Paleo-ish / LC personalities that lean classically liberal, conservative, or libertarian. Why? Because they themselves have seen fit to make me aware of it. It’s a damn short list. Way too short.

…So the other day, I signaled a bit of conciliation towards low-carb diets that, depending on your point of view, may sound like backpedaling, refining the message, or however else you care to see it. This morning, I was mulling over what are the absolute bare essentials that often put me at odds with low-carbers. 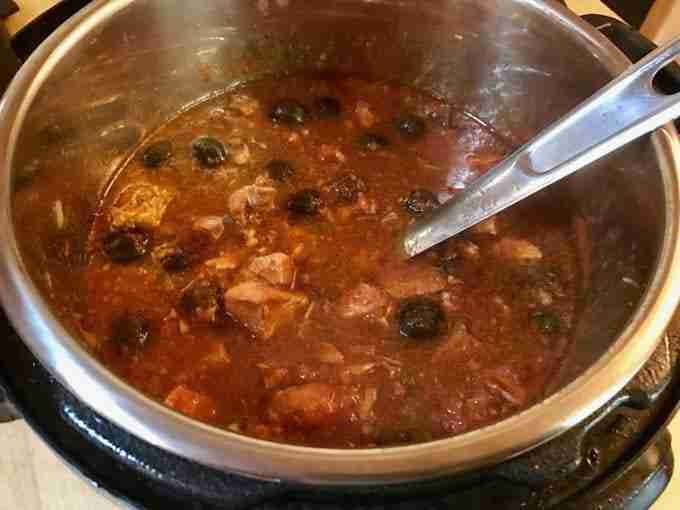 I’ve been doing this recipe forever. Conventionally, you’re looking at minimum of four hours, because you’ll need at least three hours stovetop simmer to get the pork tender and falling off the chop bones. I have also done it many times in the crock pot, taking even longer.

Today’s task was to test the limits of the Instant Pot (see here for more detail), which I now use several times per week and have yet to scratch the surface of in terms of versatility and ease. The mission: my chile verde recipe as quickly as possible. This is my breakfast version. Remember, “verde” refers to using green peppers instead of red (“chile colorado“). The tomatoes and black olives (with their trace brine), instead of roasted tomatillos gives it a wonderful tangy bite that pairs perfectly with a runny egg yolk. For a dinner meal, same recipe using roasted tomatillos, and skip the olives. 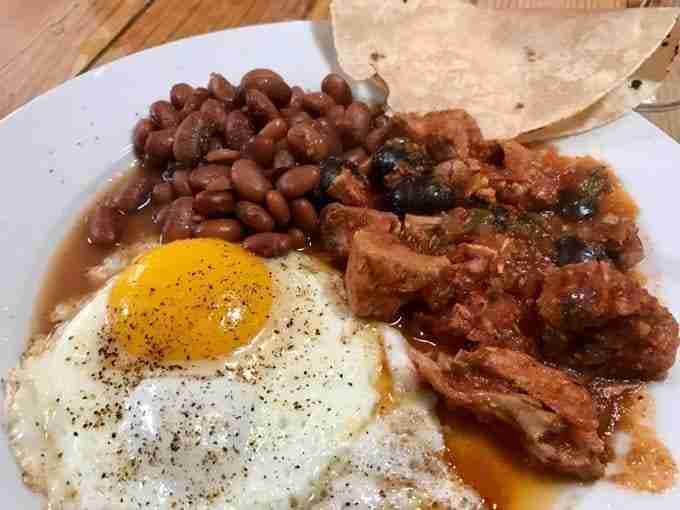 Pretty low-carb, too. The tortilla is Siete Cassava & Coconut Flour Tortillas, Paleo Approved. Expensive, but ordering a bunch direct from them keeps shipping cost down, and they keep forever in the freezer. 12g carb each. You can skip the pinto beans too, but a small portion isn’t particularly carby.

Alright, and now I shall continue on not caring about the Super Bowl…