Has Everbody Been Wrong About Orange Juice?

I actually remember this hubub by Dr. Paresh Dandona back close to the time I started blogging on health and diet.

Here it is again, in more detail, in Mother Jones: Are Happy Gut Bacteria Key to Weight Loss?

A few years before Super Size Me hit theaters in 2004, Dr. Paresh Dandona, a diabetes specialist in Buffalo, New York, set out to measure the body’s response to McDonald’s—specifically breakfast. Over several mornings, he fed nine normal-weight volunteers an egg sandwich with cheese and ham, a sausage muffin sandwich, and two hash brown patties.

Dandona is a professor at the State University of New York-Buffalo who also heads the Diabetes-Endocrinology Center of Western New York, and what he observed has informed his research ever since. Levels of a C-reactive protein, an indicator of systemic inflammation, shot up “within literally minutes.” “I was shocked,” he recalls, that “a simple McDonald’s meal that seems harmless enough”—the sort of high-fat, high-carbohydrate meal that 1 in 4 Americans eats regularly—would have such a dramatic effect. And it lasted for hours. […]

Over the next decade he tested the effects of various foods on the immune system. A fast-food breakfast inflamed, he found, but a high-fiber breakfast with lots of fruit did not. A breakthrough came in 2007 when he discovered that while sugar water, a stand-in for soda, caused inflammation, orange juice—even though it contains plenty of sugar—didn’t.

The Florida Department of Citrus, a state agency, was so excited it underwrote a subsequent study, and had fresh-squeezed orange juice flown in for it. This time, along with their two-sandwich, two-hash-brown, 910-calorie breakfast, one-third of his volunteers—10 in total—quaffed a glass of fresh OJ. The non-juice drinkers, half of whom drank sugar water, and the other half plain water, had the expected response—inflammation and elevated blood sugar. But the OJ drinkers had neither elevated blood sugar nor inflammation. The juice seemed to shield their metabolism. “It just switched off the whole damn thing,” Dandona says. Other scientists have since confirmed that OJ has a strong anti-inflammatory effect.

Orange juice is rich in antioxidants like vitamin C, beneficial flavonoids, and small amounts of fiber, all of which may be directly anti-inflammatory. But what caught Dandona’s attention was another substance. Those subjects who ate just the McDonald’s breakfast had increased blood levels of a molecule called endotoxin. This molecule comes from the outer walls of certain bacteria. If endotoxin levels rise, our immune system perceives a threat and responds with inflammation.

So that’s the new “gut connection” that attempts to explain the effect, which the rest of the article goes on into some detail. 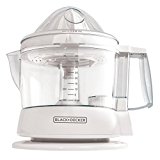 For some time now, I’ve made orange juice a modest but regular part of most days. Probably less than 12 ounces, on average. The problem is, I’m not altogether than impressed with anything commercially available, since I’m not near a Whole Foods where they have the on-site fresh squeezed available (non-pasturized, as well).

Even though the labels on all the best products say “100% orange juice, never from concentrate,” they just always lack a lot of flavor and depth, for me.

Enter the BLACK & DECKER CJ630 32-Ounce Electric Citrus Juicer. It’s a ridiculous nineteen bucks. That and a 10-pound sack of oranges and man oh wow: it’s not even the same thing at all! no comparison. I use the highest pulp setting, but it’s not like there’s pulp floating around. It just makes the juice a bit thicker, more depth and body, like a nectar more than a watery juice. Also, I think having it at room temperature makes a big taste difference as well.

Three oranges renders a nice 8-10 ounce glass. Perfect for me. For other meals, I’ll typically do just one orange (3-4 ounces) right before a meal and I have noticed far better clearance of the meal with no boating or digestion discomfort. I never noticed such a thing from the pasteurized, bottled stuff from the market.

If you try, let me know what you think.