What Just Went Down:

On Friday, Feb 17, Beatrice got up here to the cabin. A week was in store for us and the doggies. It tuned into a 13-day family medical intervention. Here are the high points.

By Sunday, shit was looking grim. Her mom, mid-80s, with a non aggressive form of lymphoma that had been acting up, was under care and plan to deal with it. A low-dose chemo, pill form.

But, they thought some measures were called for before going on the regimen, and so there were additional prescriptions.

…And within two days, she became so demented she knew not her age, nor how many children she bore (six, is the correct answer), was in chronic pain, and other bad shit.

So, we headed out early Tuesday morning, intending to be back by Sunday, and Bea could get back to school Monday, as scheduled.

The next day, once set up in the AirBNB, I was casually exchanging email on current political events with my buddy Mike Eades, and with no intention whatsoever to ask for help, either I mentioned or he asked if she’s on a diuretic.

“She’s dehydrated,” Mike says, and adds that there are three classes of human that can get really dehydrated easy: old, young, sick.

It’s not all he wrote to me, but he gave me enough that within 2 hours, Bea’s mom was admitted to emergency with a husband imperative she be put on IV fluids immediately. She began to improve soon.

It’s so damn easy to understand, once you’re just given a clue into the essentials. She had a bit of leg edema. That’s why the diuretic. But it wasn’t managed. It fixed that, and overshot big.

Most infuriating to me was that the med staff did the tests and lied to Bea and the family. Did it come back as dehydration? Nope, of corse it didn’t. Came back as hypercalcaemia, which in addition to aligning with the onset dementia perfectly, is also chiefly caused by dehydration. Get it? So, “that’s her problem,” and not that they overshot and dehydrated her with a diuretic drug.

You can easily Google all this stuff. Dehydration can easily cause high calcium (any cook who reduced sauces ought understand this), and high calcium can cause your brain to screw up. Don’t know what units of measure, but she was at 14, where 8-10 is normal range. When hydrated enough to dilute calcium to 9, she began making sense again. At 8.1, we had mom back.

…The problem was that the process took a huge physical toll, and once out of the woods, she had to spend about a week in a rehabilitation center where she was too weak to do much of anything.

She’s back home, better, but still not where she was a couple of weeks ago. Do not get old people dehydrated. What in the hell, put an 85-yr-old on a diuretic?

…Bea’s dad bought me shoes. I sent a thank you. 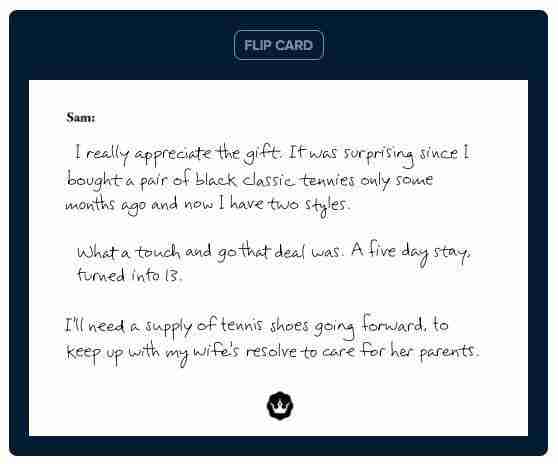 So there you go.