Someone messaged me this yesterday. It’s From Jimmy Moore’s Livin’ La Vida Low-Carb group on Facebook. 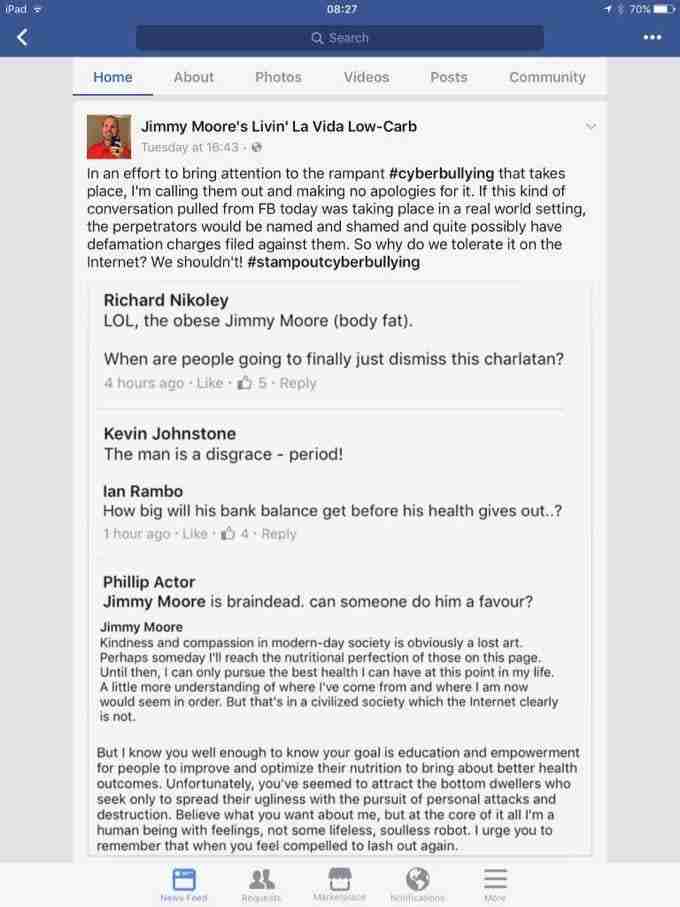 Oh, cry me a river of orange-flavored exogenous ketone-drink, Jimmy.

What is it? Eight YEARS now, since 2008…you know, back when you were still doing reasonably decent with that 180-pound weight loss under your belt by following a sensible, Atkin’s style low-carbohydrate diet with adequate protein and sane amounts of fat and yes, even carbohydrate?

Hell, even your propensity toward a lot of packaged, low-carb junk food served you way better, back then.

And you were relevant in spite of struggling because at least you were maintaining, for the most part, and weren’t super far from your goal anyway. You had good guests on your show, myself included (twice). You brought in good guest hosts too, and I was happy to be one of them.

But in your zeal to let natural fats off the hook and not overly obsess about cholesterol levels, you completely went off the rails, and if that wasn’t enough, then you have to equate protein to “chocolate cake.” Why? Because you have allowed yourself to regard ketones as some primary cause, rather than as simply one of the effects of fat oxidation.

And for five years, now, you double down and double down again on gobbling ungodly amounts of fat, to the order of 80-85% of your dietary intake, and have the bloodwork to show for such folly after three years of insanity, with a result that looks like this, now, after what, an 80-pound rebound? And why should I care? I don’t make a habit of going around fat shaming people for their problems. But you hold status and position and it’s perfectly reasonable to hold you to some standard of sanity.

Deana Callahan Wilisch As always, you are the epitome of grace under fire. Love all that you stand for! Hold your head high, Jimmy. The world is a better place because you’re in it. I’m SO glad God made you. ❤️
Like · 29 · April 18 at 4:50pm

Rachel M Lerma Reclaiming one’s health is a journey and often a very slow and laborious journey. People get hung up on the visual “proof” but ignore the other, often more important gauges of health–improved blood work numbers, improved energy, improved strength, improved mental and emotional health. Weight can be “perfect” while everything else is terrible. I’d much rather listen to you and your experience and your multitude of ways your health and wellbeing have improved than someone who views just a number on a scale as the benchmark!
Like · 9 · April 18 at 5:04pm

Luisa Gregory Well said Jimmy. Thank you so much for the compassion and love you show for human kind. Thank you so much for all the work you do. I’m a diabetic nurse and see so many people body shaming my patients. It’s not there fault they are sick or obese . No one ever told them how to fix there disease. People like you are out there spreading the health news and giving people hope. You inspired me to help change my patients lives. Keep up the great work and don’t let these bottom feeders put out your fire ?
Like · 8 · April 18 at 5:01pm

Beth Carr Loyd My heart hurts for how you are being treated. Remember Jimmy how much God loves you. You are helping so many people not by being perfect but by being human. Keep strong there are more for you than against you!
Like · 7 · April 18 at 5:26pm

As they say with regard to porn: you’ve seen one, you’ve seen them all. Here, you’ve read them all. Not a single comment, so far, even gently and politely signaling that there’s clearly something wrong, Jimmy. You keep jetting all over the world to speaking engagements and to attend various conferences on the money you get from affiliate and advertising revenue, ultimately ponied up by the type of folks who still don’t know a damn thing about body recomposition, fat loss, adequate nutrition…and the list goes on…and in large measure, because you have a financial interest in keeping them in the dark so they’ll keep supporting the companies that foot the bill for your laughable guru lifestyle.

…And why so many other diet-and-health docs and researchers still go on your podcast is a mystery to me. I’ve known a few over the years who’ve told me they won’t go on, anymore, because of your demonstrated loss of all credibility.

I looked the other way—aw shucks—for years, Jimmy. Defended you countless times, even in my own blog comments. The final straw for me was when you tossed Paul Jaminet under the bus—one of the kindest gentlemen many of us have ever known. Why? Well, seems to me that had you been forthright and represented things as you did initially, on video for chrissakes, it would have undercut your whole business.

You’re exactly right that my goal has always been education and empowerment, which is also precisely why I’ve never made a serious business off this. It’s almost guaranteed to become an automatic financial and status conflict-of-interest if you do. It breeds a nefarious intransigence I just hate. And I’ve been around plenty long enough to see how staying the course with some narrative of dietary advice stalls and derails people all the time because of their level of trust.

I have always liked being wrong more than anything about this. It’s the only time you get to know you’re right (you’re right that you’re wrong).

Now, let’s close with a quick little primer on dietary fat intake in the context of losing body fat.

Enough with the bullshit.

Hey Jimmy.
I’m a weird guy. Apart from your commenters who seem to wish to just extend dispensation for your sins and failings (we’re all awful about it, including myself) and admonish you to carry on without even a modicum of tough love someone who actually cares about you would do (your “Like” on their comment is more important to them than you are, your health, your credibility and the success you could be).
I’m a meanie.
While not YOUR struggle, I’ve had my own, and it’s a way different one than dietary fat, just doesn’t show quite as much.
I would not even bother if I didn’t care.
But in the end, dude, you have to demonstrate effectiveness. You can “go back to church” all you want and find no end to choirs singing your praises. But those who truly care about you, those who truly understand your capacity and your prowess of influence, will tell you this:
https://freetheanimal.com/2017/04/cyberbullied-jimmy-moore.html