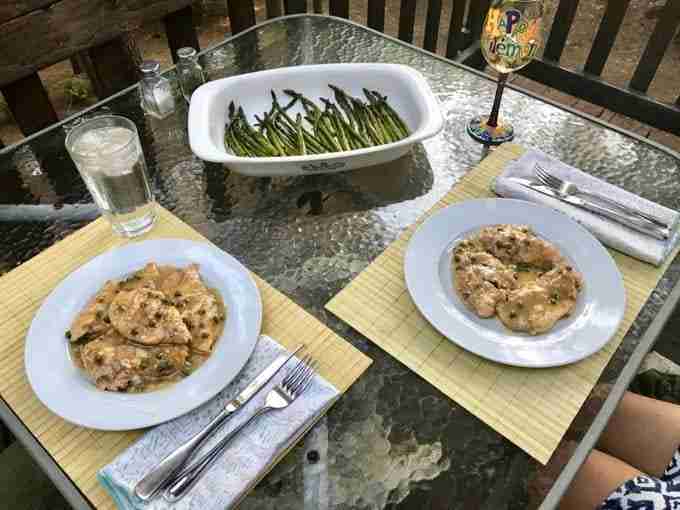 A favorite of many is a piccata dish, both the chicken and veal versions. The problem is, they are loaded with calories and many of those calories are hidden fat calories.

Generally, one dredges the chicken in flour, sauteés it in plenty of olive oil, then it’s transferred to the piccata sauce, which consists of a number of tablespoons of butter and a number of tablespoons of olive oil plus the chicken stock, such that all the cooking fat and then added fat in the sauce creates a serious calorie bomb that can double the net calories of a serving.

There’s a better way, without compromising that wonderful sour and salty flavor. And, for the grain- or gluten-free folks, it’s your ticket too, because there’s no dredging in flour (which really, principally serves to thicken the piccata sauce).

First, you’ll need chicken, and I’ve filleted mine and did a little pounding with the mallet so they’re about even thickness. 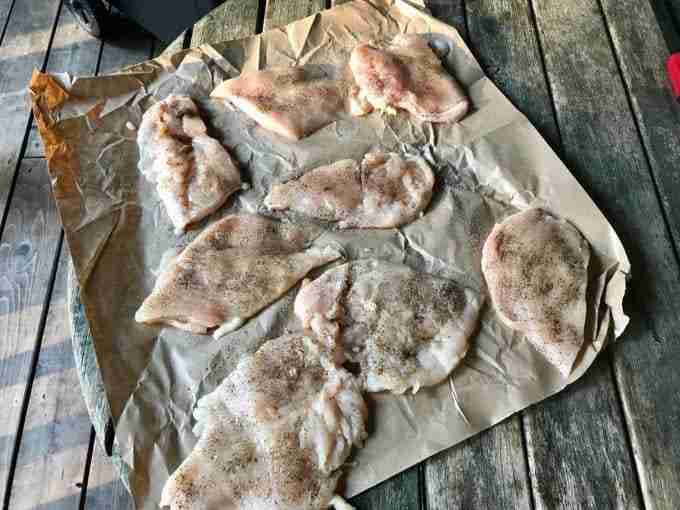 Then, I grilled them. This, you can do ahead of time and just keep them warm while you finish off the sauce. And, perhaps make a side dish. I chose roasted asparagus. 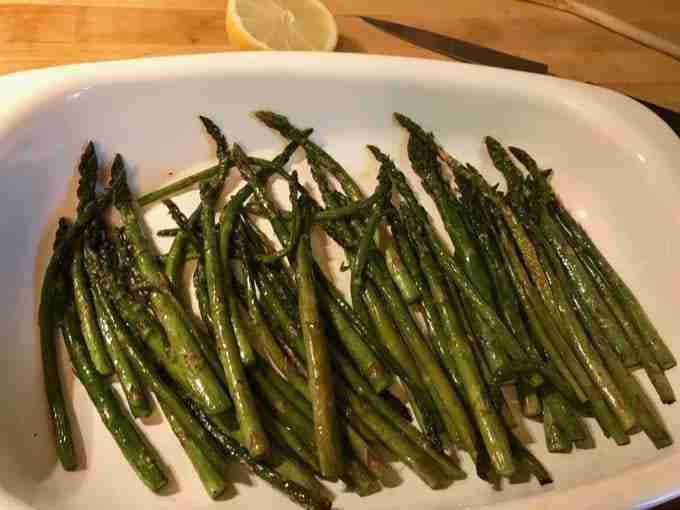 Preheat oven to 400. Lightly drizzle a bit of olive oil, season with S&P, toss it, spread on a cookie sheet, and once the oven is a go, roast for 20 minutes (longer for the thick asparagus, but i never get those).

To make the sauce for a couple of pounds of grilled chicken breast, crush 2-3 cloves of garlic, and I like about the same amount of finely chopped onion. Sauteeé that in a tsp of olive oil for a couple of minutes. Then, add a quart of Kitchen Basics UnSalted Chicken Stock and reduce by about half. Save about a half cup of the stock and stir in a heaping teaspoon of Bob’s Red Mill Potato Starch. Make sure it’s stirred into a nice colloidal-suspension slurry and dump it into your simmering, reduced stock quickly, and stir, to avoid any gelatinous lumps. It should thicken right up (works the same way as cornstarch). Per serving the carbs are negligible, about 2 grams.

Add your grilled chicken and the juice from resting, then add the juice from half of a large lemon, or a whole small one. Next, your capers, with brine. About two heaping tablespoons should do it. 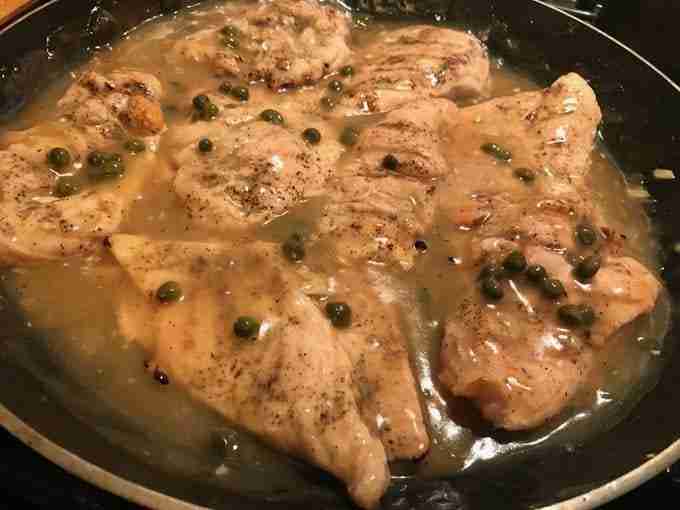 Bring it back to a simmer, put it on your smallest burner on low and cover while you finish the rest of your preparations in terms of the side dish and plating.

Because I’m in a rather intensive calorically controlled, logging and tracking thing right now, I weighed mine, without the sauce, and plated 13.5 ounces for me. 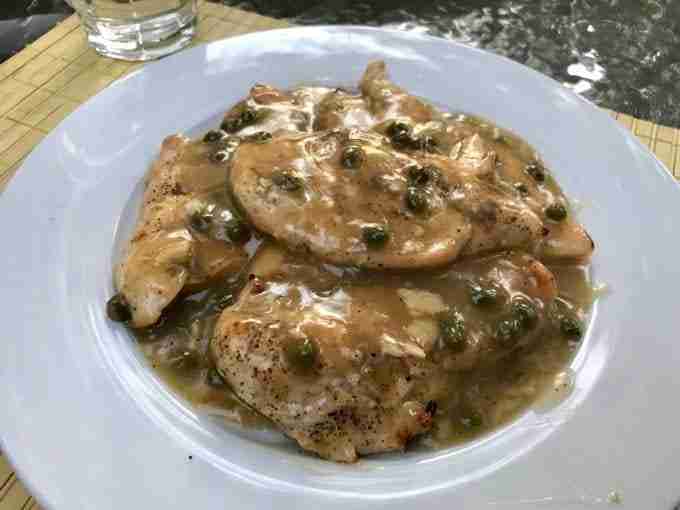 Bea’s plate, at a modest 9 ounces—that she finished off save for a few bits to the doggies—is perhaps a more elegant and attractive serving. 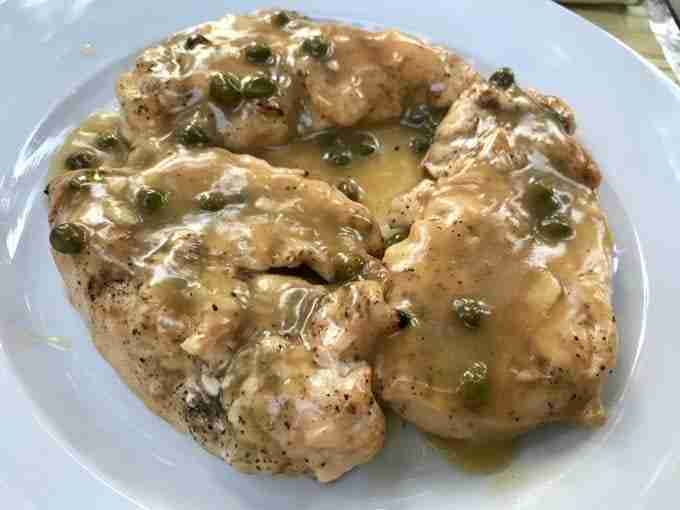 Alright, just as in my last dish, the Chicken Crust Margherita Pizza, it’s all about the protein, baby. 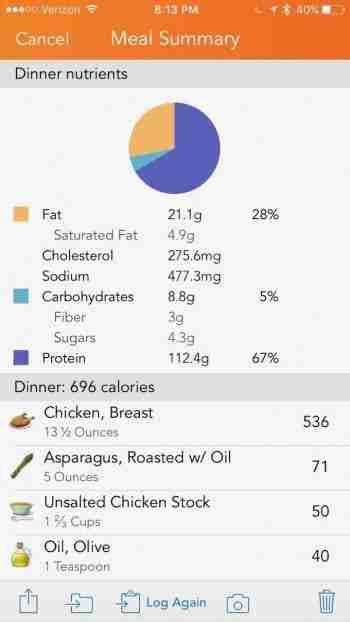 Did I say PROTEIN?

I only log the principle stuff, so the per-serving bit of garlic, onion, lemon juice and capers are negligible. The teaspoon of olive oil is an estimate, counting my portion of the tsp used to sauteé the garlic, plus the drizzle on the asparagus, even though the logged item already incorporates it. I’d rather overestimate than underestimate, so it may actually have a few grams less fat.