If you haven’t yet heard of the so-called Ketogenic Chicken Pizza Crust, you’ve been asleep. It’s all the rage.

Is it good? Yes, and far better than any of the other alternatives I’ve tried. I’ll get to that.

But let’s digress for a minute. Is it “ketogenic?” Fuck that. You know, this shit used to be a lot more rational. The alternatives—like cauliflower crust or meatza—were always touted as what they actually were: low-carb, grain-free versions of a popular comfort food. Now, that’s not good enough. Now, stuff has to be “ketogenic,” as though that means something. It doesn’t.

While all successful fat-loss diets are necessarily highish-fat diets because you add your body fat consumption to your dietary fat consumption for total fat consumption, so too are all successful fat-loss diets ketogenic, since ketones are a byproduct of fat metabolism, both dietary and body fat. Macros are fucking irrelevant, except to the extent that you prefer one over another and that you are more likely to maintain a 600+ kcal deficit for the duration. It’s all that fucking matters and the rest is ketoshyster bullshit for their ketotarded marks.

There is no magic that makes any food ketogenic or fattening. How about I give you a recipe for a ketogenic cheesecake? Easy. It’s one whole cake and it comes out to 1,500 calories, You eat one whole cheesecake per day, but that’s all you eat, and all you need to do is be active enough to burn 2,100 calories or more each day.

Bingo! ketogenic Cheesecake. …Martin Berkhan would be so pleased.

The ingredients are simple and limited. 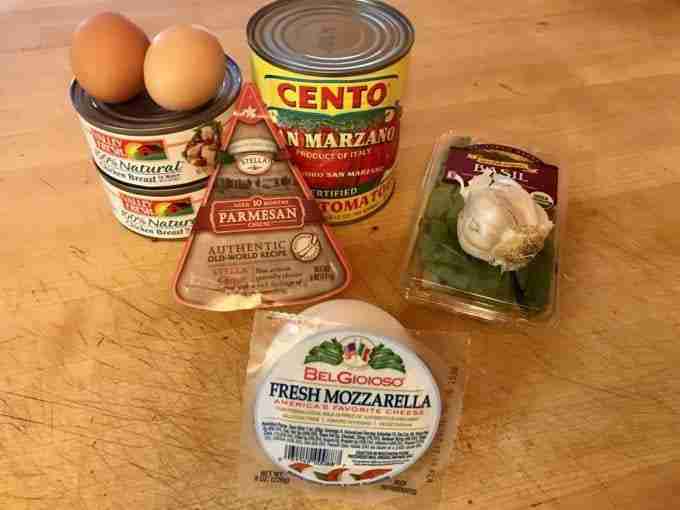 For the sauce, it’s enough for two, perhaps three, pizzas, so make it all up, sauce your pie, save the rest for the next time, which probably won’t be far off.

Take the big can of whole, peeled tomatoes and pulse in the blender a few times. Just pulse. Crush 4 large cloves of garlic and sauteé with about a tsp olive oil for a couple of minutes, until you feel the aroma. 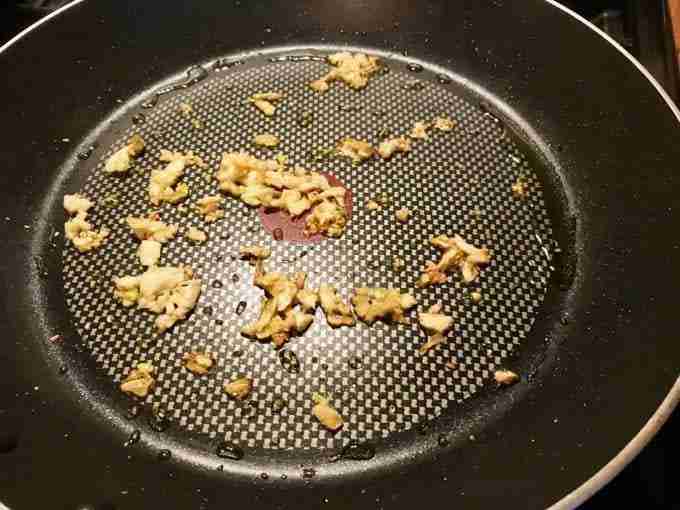 Then, add your pulsed sauce, the chopped basil leaves, and also: 1/2 tsp sugar, 1/4 tsp salt, and a pinch of black pepper. Simmer it, stirring occasionally, for about 45 minutes in order to reduce it to between 1 1/2 and 2 cups. The best way to tell it’s done is when the bubbles look like mud bubbles instead of water bubbles. Transfer it to a holding dish to cool. 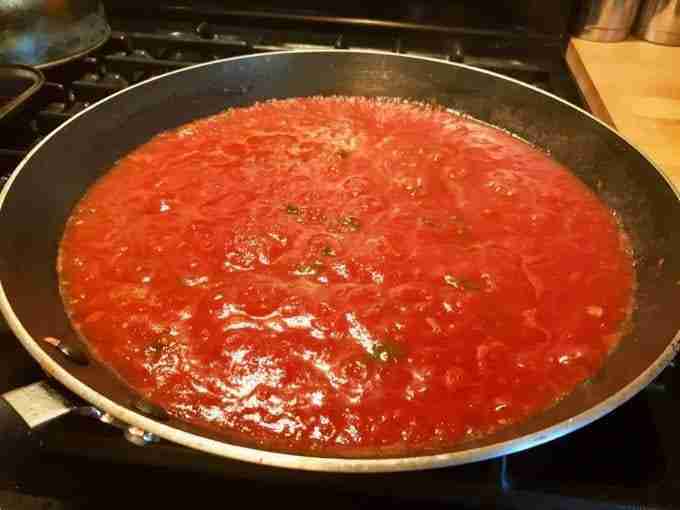 The crust is the tricky part and what you like is up to you. There are a number of chicken crust recipes, so Google and check them out. Most involve pre-cooking the crust quite a bit. Others call for first desiccating the chicken itself for a few minutes in the oven, then mixing it, then cooking it for about 20, then topping and cooking the pizza. For the first time out, I tried something I hadn’t seen in the other versions: a pizza stone.

First, drain the chicken well. Then mix in the two eggs and 2 ounces of grated fresh parmesan. 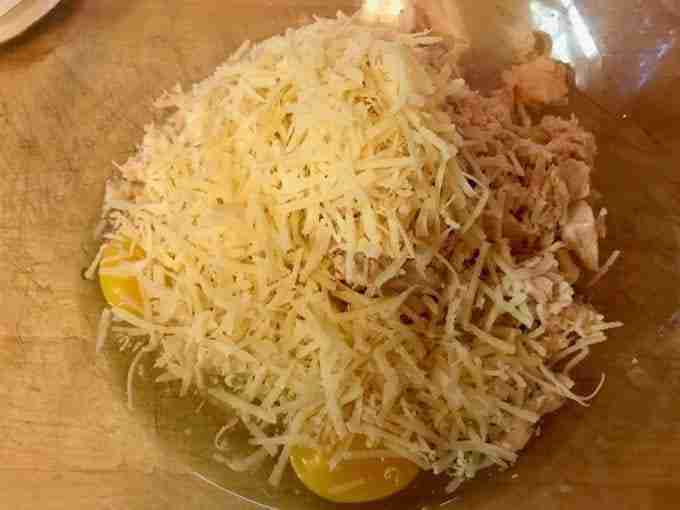 At about the time you start cooking the sauce, put your oven to max (500-550) with the stone in the bottom third of the oven.

By the time your sauce is done and set in a holding dish and your “dough” is well mixed and mashed, your pizza stone will be hot as shit. You want to work rather quickly. Take out the stone, close the oven door, lower the oven to 500, and spread the “dough” on the stone, about 1/4″ thick.

Place it in the oven for about 6 minutes to pre-cook a bit. My hypothesis here is that because of the high and extreme heat and heat retention of the stone, it will serve to dry out the “dough” a lot faster than the methods with a lengthy pre-cook. You’ll get to decide for yourself.

Take it back out, close the door, sauce the pie, and arrange mozzarella. I think I was a bit heavy on the cheese.

Cook about 13-15 minutes, until the cheese bubbles and the tops of the bubbles brown. Remove it from the oven and try to get it off the stone soon. I found the crust slightly fragile, so I cut it into four pieces and plated it immediately. 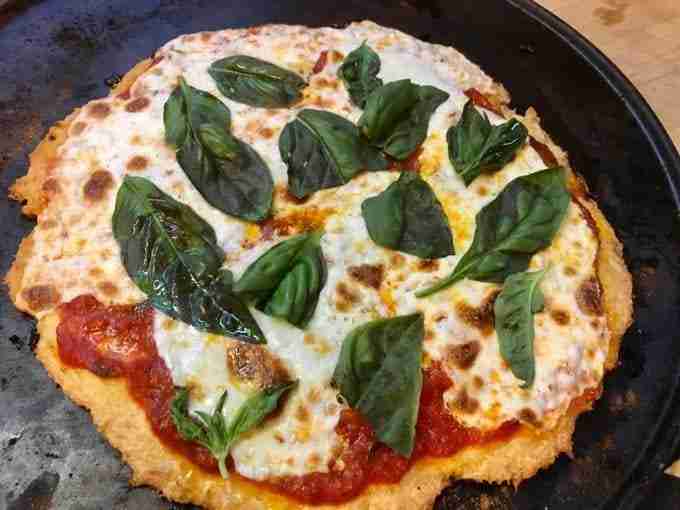 And now we come to my favorite part. Dismissing all the rot about keto and carbs, the point of the pizza is PROTEIN! Yea! Fuckin’ PROTEIN, baby. And because it’s lean chicken, the fat is pretty reasonable. Over 50% of the calories are from protein.

Just look. I created a recipe in LoseIt! 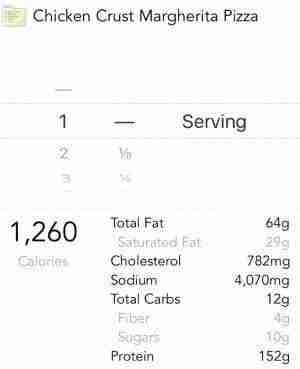 Dudes and dudesses: now here is a ketogenic pizza if you eat just one whole one per day and nothing else. And you know what? If you eat it half at a time, six hours apart, with its 152 grams of highly satiating protein, you just might have an easy time of it.