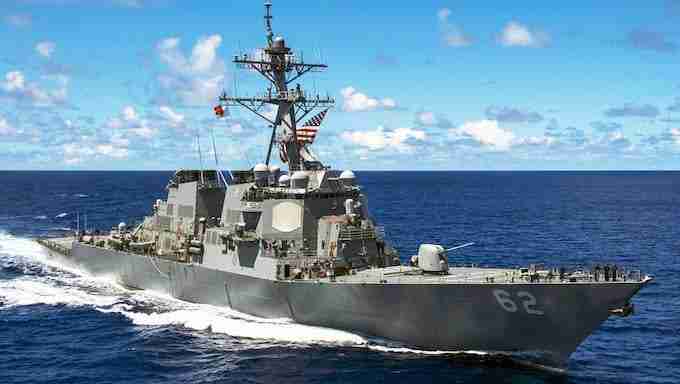 I was asked for my take on the USS FITZGERALD (DDG-62) collision at sea incident, so here’s what I posted to Facebook yesterday, having read this New York Post article. With edits and enhancements:

There is no mystery here.

The Underway Officer of the Deck Fucked UP so bad it’s difficult to imagine. I’ve been OOD in and out of Yokosuka—USS REEVES (CG-24); about the same displacement—a hundred times; during all times of day, night, adverse weather, and wee hours. In fact, coming into Yokosuka, 4 am in that part of the entry lanes is quite common, so we’d be tied up by the morning’s work day and shipyard workers could get busy.

The Captain fucked up by having someone so incompetent as OOD. They both need to go down hard, full force; because there is no excuse. None. That’s the Navy tradition that has always served the surface fleet well. Ultimate accountability, no passes ever. Your career is over.  …And all this bullshit in the NYP article about ship-to-ship comms is utter nonsense. Almost never happens and even if you try, you almost never get a response. With commercial vessels, you instead always assume it’s on auto-pilot, there’s one dude—if anyone at all—on the bridge, he’s drunk, and probably asleep.

This shit is easy to avoid, even in very heavy choke-point shipping traffic in and out. Surface radar easily has a 30k ton container ship painted 20-30 miles out, and you can see them with your own eyeballs 10-12 miles out. Once you do a minute of scope head plotting with the grease pencil, you can see how close you’ll come to each other if both vessels maintain course and speed. If inside of 10,000 yards (5 nautical miles), all it takes is a 2-5 degree course change, early, to port or starboard, to keep him outside of that envelope.

And, every set of Standing Orders on US Navy ships typically demands that if for some reason it’s unavoidable to keep another vessel outside of 10k yards, you are to notify the Captain immediately.

It’s a complete fuck up, and now eight people are dead.

…Someone also asked for my take on the sailors being sealed in a flooding compartment:

The NYP article I read says they still haven’t determined much about that, whether it was an order from whoever was commanding the conflagration or an on-scene call by whomever. If on-scene, it could have been a case of either not knowing it would seal people in, or knowing that and making a tough call because of the hatch location. Depending on which deck, where it was located, and how much would / could flood if the opportunity to seal it was missed, there are certainly legitimate scenarios where you just gotta do what you gotta do.

Everyone on board should understand and accept this, even if hindsight sheds light on possible alternative actions. Time for deep analysis is not a luxury. If this is not understood and accepted, don’t sign up for the Navy.

There are but three scenarios I can imagine where the Captain and OOD may not be culpable for being collided upon by another vessel:

Tokyo, Hong Kong, and Singapore are three of the busiest ports in the world and I’ve been OOD coming in and going out numerous times in all of them, in all weather and night time conditions. It can get very complex, sometimes tracking several dozen other vessels at a time. You have to be fully vigilant, fully aware, and you have to think way ahead. You never let yourself get into a situation where solving one problem creates two others.

Do small course and/or speed adjustments early in order to open up the closest point of approach (CPA) to as many vessels as possible, lightening your management load. Or, just turn a 360-donut or two and let the Great Convergence happen an additional mile or two in front of you than it would have been before (too close for comfort). “Helmsman, right fifteen degrees rudder.”

An order to the helm in five simple words.

There’s almost an unlimited number of alternative options for ameliorating a complex scenario and a fuck-load of them are going to be good options. It’s essentially so damn easy, provided you know and understand what you’re doing and have a very keen sense of relative motion in two-dimensional space, amongst many targets, all at variable vectors.

In the situation at hand, with Fitzgerald being hit broadside to starboard, the Rules of the Road are simple and clear as all fuck, so much so that it would be inexcusable for even a Junior OOD in training on his first watch to fuck it up.

CROSSING SITUATION (From Rules 15 and 17)

When two power-driven vessels are crossing so as to involve the risk of collision, the vessel which has the other on her own starboard side shall keep out of the way and avoid crossing ahead of the other vessel.

ACTION BY THE GIVE-WAY VESSEL (From Rule 16)

Every vessel in sight of another and required to give way to another vessel shall, so far as posssible, take early and substantial action to give way. [Note: SUBSTANTIAL ACTION. Unlike small course changes very early in the scenario I mentioned above, this calls for a big move, like a 90-degree course change, so as to signal to the give-way that you are taking action.]

ACTION BY THE STAND-ON VESSEL (From Rule 17)

When one of two vessels is required to give way, the other vessel (the stand-on vessel) shall maintain its course and speed.

How simple and basic is that?

No excuses. No passes. No quarter. Court martial. Leavenworth time. Maintain the integrity and professionalism of the US Navy at sea.