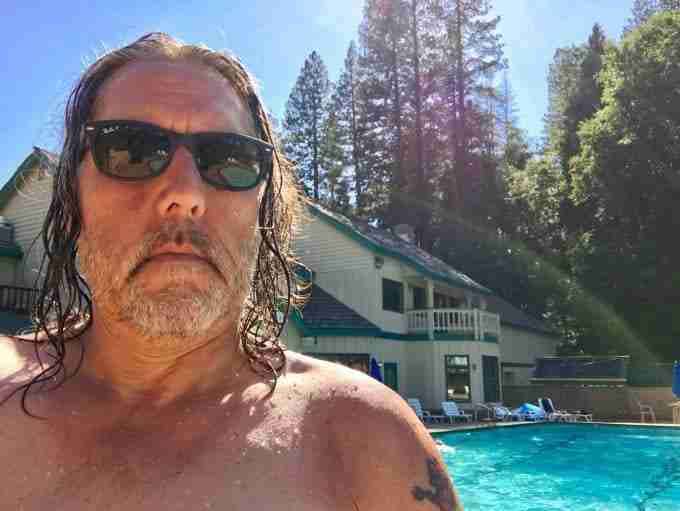 I’ve been a bit camera shy for a few years now. Probably a few more than a few… I guess my lesson is, be careful of letting two spinal injuries, concomitant chronic pain over months and years—with concomitant self-medication—begin to rule your life because when the pain is over, the downward gradient may be just the beginning.

It can happen to the worst of us. You should have seen me by about 3 months ago, early April 2017. Well, here. this is about the best I can do because, as I say, I avoided cameras. 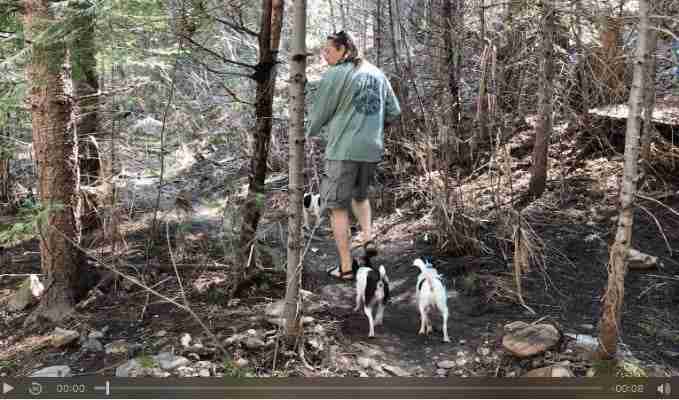 No calves, skinny arms, skinny legs, and a spare tire.

I hadn’t been in a gym—or near an actual man-weight—in like four years, and a year and a half of that time I spent in pain until lumbar surgery in May ’15. By last April—2 years later, and after a dark, cold, wet and frozen winter spent mostly by myself and dogs at 4,200 feet elevation in “mountainville“—I was a mess. I was drinking too much, too often, felt very unhealthy, and weighed 203.5 pounds net.

…They say love conquers all, which is complete touchy-feely bullshittery for feeble minds, but it is true that I’m in love with my wife and I also knew that my time was on lease pending her retirement from school teaching in a couple of months; if, I didn’t get back to being the man of the house: in word, deed, and also fucking looking the part, for Christ’s sake!

That’s when I began the calorie tracking, or, better: energy input and output management using my brain and available tools like smartphone apps (LoseIt!), a kitchen scale, and a Fitbit (integrated with LoseIt!). I maintained a variable average 600-800 calorie deficit and by “variable,” I mean that the Fitbit tracking data enabled dynamic, real-time management of energy input, owing to higher or lower levels of energy output activity. Setting a fixed energy intake level, without regard to variable outputs, is really ‘tarded; and you’ll fail.

Alternatively, just cut carbohydrate to nil, lower protein to concentration-camp levels, and just eat more fat. Be a Ketotard (See here and here). And whatever you do, especially don’t use a tracking device: Is Your Fitness Tracker Sabotaging Your Weight-Loss Efforts? That’s an absurdly ridiculous question by one of the New Ketoshysters, Andreas Eenfeldt, aka “Diet ‘argumentum ad verecundiam‘ Doctor.”

Let me digress on that for a fit-bit. Does Andreas really believe his dupes, sycophants, and marks to be so pathetically stupid that they’ll not notice…

Here’s another reason why calorie counting is a truly bad strategy for weight loss. Not only is it very hard to estimate exactly how many calories you eat, it’s almost impossible to estimate how many you burn.

According to new research even wearing a fitness tracker is not helping estimate calories either. In fact, they are wildly off – by as much as 93% on average!

Shorter Andreas: “Just take the Fat Bomb. It may be 800 calories, it may be 1,200. Your tracker or app won’t tell you and you won’t know how many steps to take or how much you ought to get off your ass. Just do it. Take the fat bomb. Get on the net. Represent!”

#3 is ‘almost impossible to estimate’ the absurdity of. Walk a mile, or hell, walk for 15 minutes at a nice robust pace. Now, be very dutiful to your Fitbit Tech when it tells you that you walked 370 feet, or 14.3 miles, and I guess you get to take your preferential pick. This is how stupid he thinks you are.

…Does Tom “Fat Head” Naughton’s admonition in his documentary—that’s it’s laudable to have as a tenant that you have a functioning brain, apply only when it’s not inconvenient to use it instead of Andreas’ advice to just throw up your hands in despair and follow the Ketotard Diet Approach?

By using your brain, you can overcome the limitations of both being way off on your inputs (neither 100 calories nor 600 calories is correct for that large bowl of chicken soup…use your head and gain experience) and your outputs. For instance, I set up my Fitbit as the instructions call for. Walk a good distance normally across the room, count your steps, measure the distance, and do maths. I came out to 30″ stride length. All Fitbit does is count steps. It applies your stride length, does maths, gives the distance walked, and uses an algorithm to estimate calorie burn based on your personal body parameters. I decided to compare it to a GPS for a 2.5-mile walk.

[Check out the two must read at the end of the post, and pay particular attention to Lyle McDonald’s section on NEAT (non-exercise activity thermogenesis). Turns out it can be big, into caloric 4-figures, and it also turns out that Fitbit does a damn decent job of accounting for it in my experience.]

…Stuff that in your bacon, cheese, salami, pepperoni, and more bacon frittata with sour cream and guacamole on top, Andreas!

By doing it smarter, my progress was certain, measurable, and pleasing. Just before the Memorial Day weekend, so serious had I become that I ditched alcohol completely. It turned out to be easy. I’ll explain all of that in a post of its own soon, but I’m approaching the 6-week point. 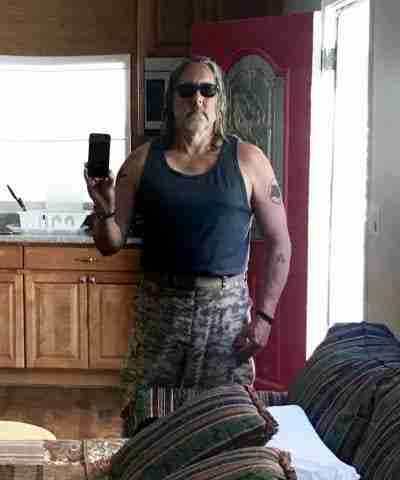 By late May, a bit before that photo, above, I was down to 193.5 for a 10-pound weight loss in two months using exactly what DietDoctor Eenfeldt advises you not to use—in lieu of consuming Fat Bombs. By sheer happenstance, the weight loss roughly corresponded to the 1.5 weekly loss rate that I had selected in LoseIt! What a miracle! That’s when I cut out alcohol altogether. Let’s chalk that up to a gracious sacrificial offering to the God of The Benevolent Accident.

To put this all in perspective, here’s the essence of what I did the first two months of true and not fake ketosis (see here and here for the difference between true and fake ketosis):

I didn’t expect see happen what really happened, once I cut out the booze entirely—rather than just cut down as I’d been doing for a while. Up to then, the hyperprotein served to guard lean mass, but that’s about it as far as I could tell.

But, once I did—within the same caloric deficit, same protein, and same everything regime—I began to gain weight not attributable to water retention flux. I felt different; like, muscles seemingly wanting to flex, to get a breather. I looked better in the mirror and the clothes already fitting better were beginning to fit betterer. 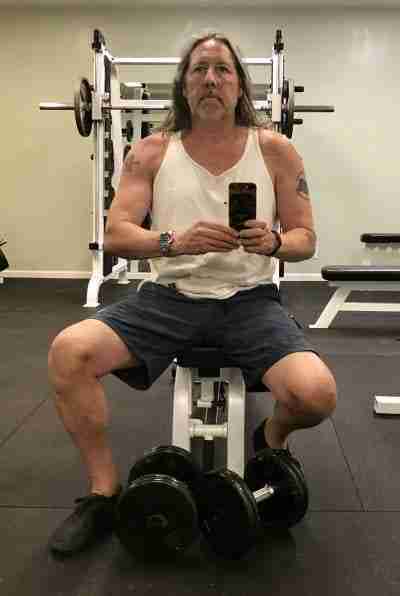 Second workout. Three full days after the first, because the recovery from the first was A Total Bitch, Dude!

Rather than worry or fret about weight gain—like a girl, or your quotidian ubiquitous beta-male—I instead went with the visceral take on it and I added two more variables, keeping all else constant. I went back to the gym and added 5-6 grams of creatine monohydrate daily, rain or shine, to my hyperprotein and disciplined caloric deficit regime.

There is no #2. But, I did want an app for that; so after two workouts where fucks given would have impressed almost any rational female virgin, of age, on earth, I downloaded StrongLifts. Very similar, only free weight—which is more manly—and 72/72 virgins agree—it’s more reps and sets (5×5), which might be good or better, depending. I’m so into it after three sessions that I’m doing all the warmups just to get more of it.

Squats, 3x per week? Yes. Gotta problem with that? It also has deadlifts once per week. My last deadlift, before StrongLifts, was over four years ago, when I pulled 325 x 5 and 305 x 4, for a second set. This session—that included DL—I decided to take it easy for the first one and set up for 155. Of course, 5 reps and then a 2nd set were a cinch. But I was surprised it even felt like weight at all. Trust me: 300# and above feels like weight. 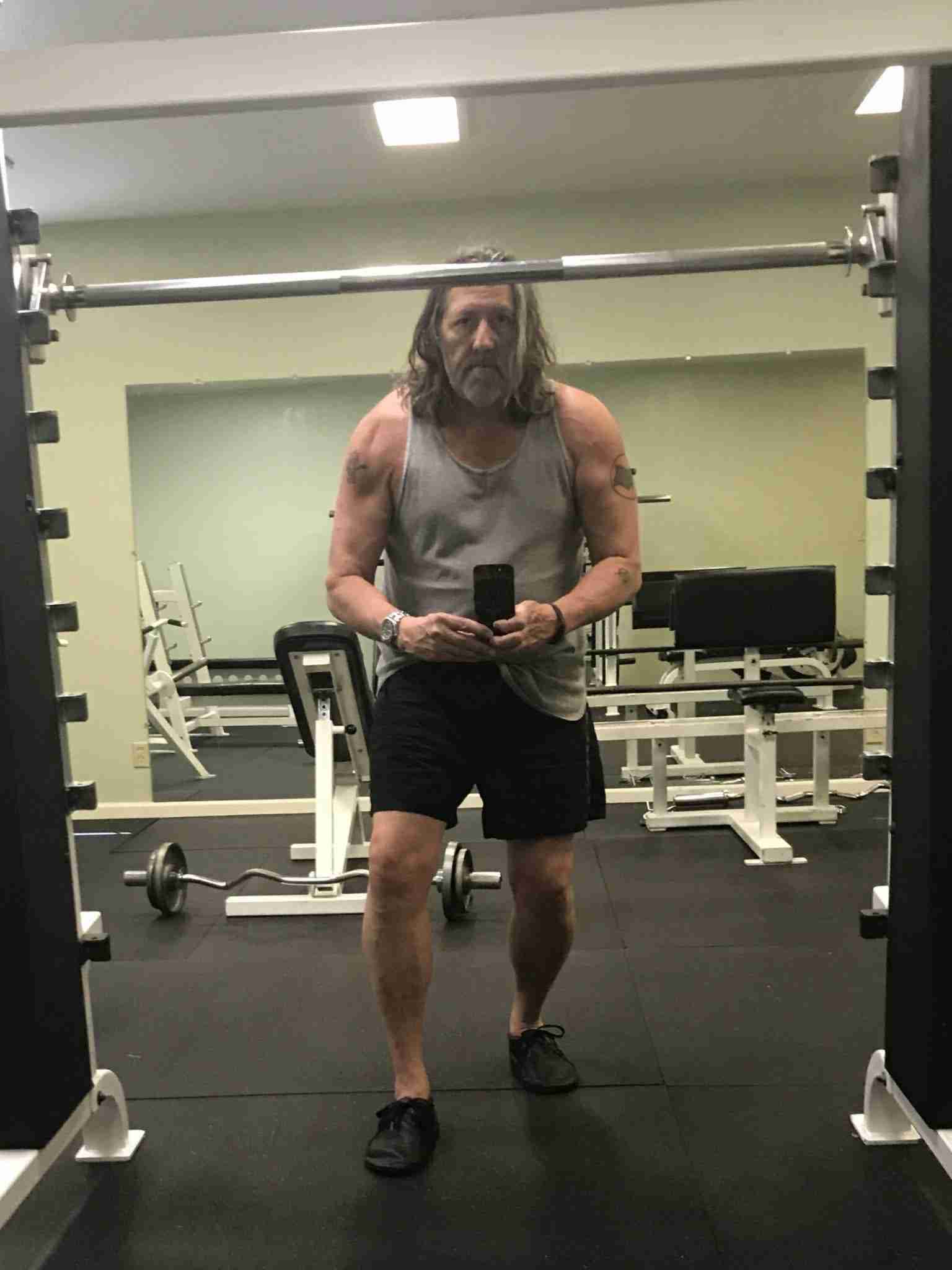 So, this pic represents a 6-pound weight gain—from 193.5 to 199.5 in two weeks, after 2 months of a steady drop from 203.5 to 193.5, essentially only managing basal energy balance, with forays into intermittent normal activity.

Pants fit better than ever, as do my XL tanks (in the good way). This is by no means even close to the end of the road and represents a violation of my personal oath to myself that I would not publish until THERE, Mutherfuckers. Done! But I made that personal oath when I only had the idea of what it would take and not the certainty that it does indeed work slightly better than drinking Fat Bombs and sitting around finding comment threads in which to add, “you’re not eating enough fat; try a fat bomb.”

I have 2-3 months to go at the same rate until I’m lean enough to go shirtless. As a serious blogger with over 4,500 posts since 2003, I had to weigh that oath with the progress I’ve been surprised about. It’s a euphoric thing for a waste like me; it’s not irrational. That’s a kinda magic. It’s so fucking objective that it bites me, making sure I’m awake.

But, what then happens over the next two to three months as I revel privately in my self-adoration, keeping all to myself for a Big Reveal? How many struggling, decent, and honest souls with flaws just like I’ve just told you about—only different by elements and degrees—are going to fall victim to the likes of jimmy moore, Adam Nally, and Andreas Eenfeldt when in that same 2-3 months they could be mocking and ridiculing them?

See, that’s the only payment I seek for doing all this (see here and here). I seek to see tons of average folk mocking and ridiculing these shysters publicly. Unafraid to do so. Happy to do so. Enthralled to do so.

…There are two posts you need to read to fully understand much of what’s underlying this, and so that you don’t need to listen to fucking Ketoshysters ever again (see here and here to know all about Ketoshysters):

No man is an island—though I maintain that every man ought to craft his own life in trying to be the best and biggest volcanic island he can be. It has been an exceedingly long road for me. I did not have the benefit of ever being some kind of health nut, muscle head, or gym rat early on. I was an entrepreneur employer who got fat like most folks do…just different sources of distraction and stress and life.

And, it has fucking plagued me for years: how it’s so much easier to gross $3.5 mil in a business year by my own wits than to fucking get to a normal, lean body composition. The good news: if you can get to being lean from being fat, getting rich might be a cake walk. Priorities.

Like I said, I’m no island. Here’s my short list of those who’ve been essentially instrumental in me developing my own dot-connector, integrator, synthesizer way about stirring up as much shit as I can in all of this Ketotardedness.

What am I trying to do?

Ha, LOL. I’ll not stop until I see the Ketoshysters as a pile of quivering jello, in a puddle of tears.

You thought I was insufferable when I got drunk every day…. Be careful what your kind soul and conscience wishes for.