Keto [Tard] Diet Update #2: Dr. Adam Nally Will Completely Shut Down Your Body Fat Burning For Six Months, For The Low Price of $5,997 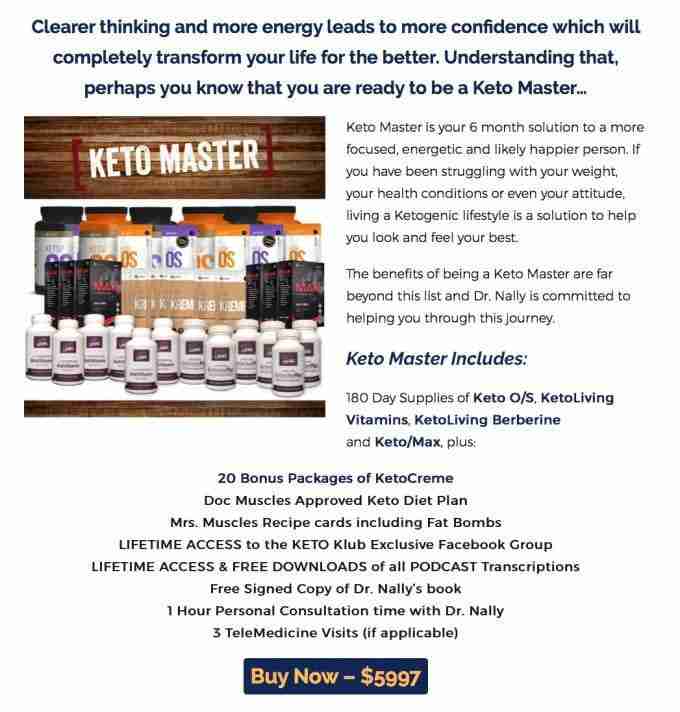 Yes, I already mocked this screen clip in Ketotard Diet Update #1. But “DocMuscles'” sales page—““how do I get into ketosis?””—is just simply the gift that keeps on giving.

Let’s ridicule it some more. …His whole approach too, and his money-grubbing bromance with jimmy moore. We’ll take a completely different angle this time. Still science, just a different part of it.

First, let’s establish something fundamental where understanding it will immediately lead you to certain knowledge over who out there is a fraud and a shyster, and who’s talking sense about ketosis. Let’s explore it by answering Dr. Adam Nally’s question, “”how do I get into ketosis?””

Simple: oxidize fat; that is, lose fat via some combination of an effective diet and exercise—and toss in some work ethic and discipline for good measure. Ketones are a byproduct of fat oxidation. Remember it and never forget it: ketones are an effect, NOT a cause. It’s a sound, rational diet that’s the ultimate cause of your fat loss. Ketones—an effect of this fat loss—are merely the evidence along the way that you’re indeed losing body fat. Technically, any diet that produces significant and sustained fat loss is ketogenic and it would be a lot better if the term were actually used accurately rather than having it be co-opted by con-artists who specialize in selling advice and products to produce ketones from dietary fat and supplements, measure them to say SEE! but which never results in fat loss—apart from an aforementioned sensible diet—while often resulting in fat gain.

Listen to all the hype. How many of these Ketoshysters with their slogan-hype—when not explicitly claiming that “ketones” are going to somehow cause you to be “fat adapted” and “burn more fat” (implying body fat)—are very comfortable with your convenient misunderstanding: hopes and expectations that you’ll be better off if you just buy some $40 bag of ketones to drink rather than put in the effort required to actually oxidize body fat by means of a sensible diet that accounts for energy in and out?

If ketones actually do cause anything, we can still know these two things:

The whole thing is rather daft, and do you know why? Because the frauds and shysters explicitly cater to a market segment of ‘tards, lazy asses, and excuse-making failures that spend a lifetime searching all around the vicinity of the real answer to their problems, but never zero in. They don’t want the truth, can’t handle the truth. Sorry to say it, but they seem to congregate in mutual commiseration. One big-ass pity party. The result of all this is an ethically fraudulent market in exogenous ketones, hyper-fat and low-protein diet advice—The Epilepsy Diet aka Nutritional Ketosis—that says “calories don’t count” and “eat more fat to burn more fat,” and measuring devices and testing strips so that people can verify that they are burning dietary fat (go figure, if 80% of your diet is fat) and that those orange-flavored $40 bags do indeed contain ketones.

But none of these bogus products or services cause anything remotely to do with fat loss. They serve only to mimic an effect while pretending it’s a cause, in order to make cash off poor ignorant people who’ve been scammed a million times already. In spite of what I wrote above, I do root for these poor souls. And arguably, I care more for them, since I’m willing to actually tell them the God’s Honest Truth about their flaws rather than blow smoke up their asses while fleecing their pockets; and all while, I most righteously and with profound indignation, condemn morally those who are cheating them out of life and money and all who’re associated or affiliated with them, along for the gravy-train-ride.

…I first heard of these bags of exogenous ketones at paleo f(x) last year. I had a viscerally negative reaction right away, though was intrigued to look into it. My reaction stems from my general resistance to the notion that is some is good, then more must be better:

If good function g(x), then better function b(xy), where y>1

That’s obviously wrong in general with no need of explanation. A more natural way of looking at it is by means of positive and negative feedbacks. Both exist in nature, but in general, positive feedback dominates when some process is “too low,” and negative feedback dominates when too high; and thus, homeostasis or stability in the system or process is achieved and maintained. Bad things tend to happen when things aren’t checked and you get runaway chain reactions. More is usually not better unless you’ve got too little already and less can be better when you’ve got more than enough.

Positive and negative feedback loops also exist in politics and economics, but I’ll leave that for another day.

So, yeah, exogenous ketones, eh; so like not produced by fat oxidation, just ingested? What’s the negative feedback, I wonder? What happens if ketones are too high? I didn’t think of it after that, never bought or tried any (I prefer my ketones endogenous, via fasting and sustained caloric deficit) but then this comment to one of my Facebook posts, by Chris Masterjohn, got me thinking again. The first paragraph addresses the CPT-1A gene mutation in Inuit that hinders or prevents ketosis. The second paragraph addresses exogenous ketones.

So, I did a little Scholar.Google digging: Inhibition of ketogenesis by ketone bodies in fasting humans (E.O. Balasse; M.A. Neef — April 1975)

Although there exists some indirect evidence that circulating ketone bodies might inhibit their own production rate, the direct demonstration of this homeostatic feed-back phenomenon is still lacking. The present work aims at demonstrating the operation of this control mechanism in human fasting ketosis.

Six obese subjects, who fasted 2–23 days, were given a primed constant i.v. infusion of 3-14C-acetoacetate for 4 hr. After a control period of 2 hr, unlabeled sodium acetoacetate was administered as a primed constant i.v. infusion at the rate of 0.688–1.960 mmol/min until the end of the study. During both periods, the rates of inflow of ketones were estimated from the specific activity of total ketones measured under near isotopic steady state conditions.

During the control period, total ketone concentration amounted to 3.98–9.65 μmol/ml and production rates of total ketones ranged between 1.450 and 2.053 mmol/min. The levels of free fatty acids, glycerol, glucose, and insulin averaged respectively 1.30 μmol/ml, 0.11 μmol/ml, , and 5.2 μU/ml.

The administration of exogenous ketones during the second phase of the study induced a 47%–92% increase in total ketone levels. During this period, the endogenous production of ketones (calculated as the difference between total inflow rate and acetoacetate infusion rate) amounted only to 67%–90% of control values. Among other factors, this inhibition of ketogenesis was probably partially related to the direct antilipolytic effect of infused ketones. Indeed, there was a concomitant fall in FFA and in glycerol levels averaging respectively 13.5% and 17.3%, without significant changes in peripheral insulin concentrations.

Our results demonstrate that during fasting, circulating ketone bodies exert an inhibitory influence on the rate of ketogenesis. This mechanism might play an important role in preventing the development of uncontrolled hyperketonemia during starvation. [emphasis added]

Now, reconsider what I wrote above about the convenience that accrues to ketone peddlers when people think that ingesting ketones makes them super-fat-burners. This shit has been known for a long time. Here’s what Lyle McDonald wrote just earlier today in comments to my posting the above study on Facebook.

What do you want to bet that if I scoured Dr. Nally’s and jimmy moore’s posts and writings, and went through all their podcasts together, I would find clear evidence that it’s just fine with them if potential customers believe that $40 bags of exogenous ketones (or $5,997 for a 180-day supply plus “but wait! you also get”) are going to help them more effectively lose fat and inches, when not only is that explicitly, scientifically established to NOT be the case, but THE EXACT OPPOSITE is true?

And how could that convenient misunderstanding not be taking place? Because then, who would be buying this stuff, except endurance athletes (where I can see a potential performance value)? I mean, seriously:

“This product is going to completely shut down all body fat burning every time you take it and is going to hamper all net fat loss on average. It’s going to be way harder for you to lose fat with this product….”

…But you should know that there’s already an app for this eventuality as writings are seen on walls. Here’s Dominic D’Agostino: 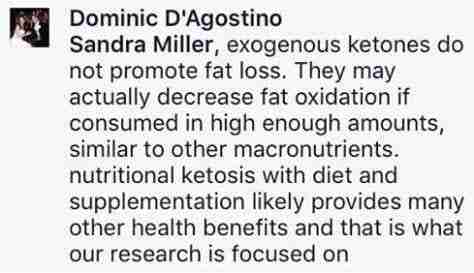 You’ll recall from Ketotard Diet Update #1 the little goal-post-moving quote from Jimmy Moore (that some folks mistook as a made-up meme). It applies here as well.

And these people appear to keep straight faces.