Back in early June, nearly two months ago, I had this silly idea while out to dinner with Bea. I was going to create a Facebook group to mock this form of “ketosis”” (fauxtosis is more like it) that’s basically a rehash of the 1920 epilepsy diet, redubbed “nutritional ketosis.””

And Richard Nikoley’s Ketotard Chronicles was born. I seeded it with about 20 of my FB friends initially and it’s steadily grown to nearly 1,000 members organically. Here’s some blog posts I’ve done about it.

I guess, at first, Jimmy just ignored it all. However, some members of his own various outlets and other Ketotarded outlets began posting things to my group or feeding them to me to post, and so Jimmy and these others began banning and blocking my members…and that kind of cloistering just never works. Tards…

By contrast, my group is public: anyone can see all the posts and comments, anyone can join, and all members can post (subject to my moderation) and comment. The only reason I moderate the posts is quality control. I like high signal and razor focus on the theme, which includes contrasting with valid forms of ketosis. Jimmy’s outlets have so far been closed, meaning the public can find the group, but you have to join it to see posts, post, and comment.

But now, out of extreme fear of my group, he’s made his group secret, meaning that only existing members even know it exists at all. It won’t show up in a search of Facebook.

Here’s how this developed. 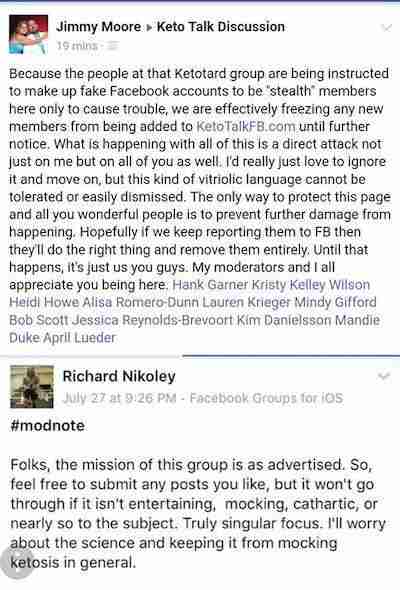 I posted it and wrote:

Guess how many people I’ve blocked? One, some spammer girl from Africa, no relation to anything as to the subject of the group, just pure spam.

No need to ban or block anyone. We’re “bulletproof” and unafraid. What’s to be afraid of? We do understand poor Jimmy’s fear. Hope it keeps him awake at night.

Hahahahahha. No wonder I woke up to 25 new member requests this morning and have had about another 20 in the last few hours.

You’re being hoist by your own petard.

One commenter pointed out that this is an example of The Streisand Effect.

…It keeps getting butter and butter: 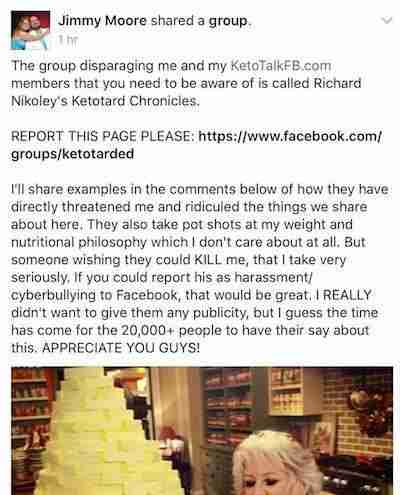 Thanks for the free promotion, Jimmy.

Membership requests flowing in steady. And by the way, there is no post or comment I am aware of threatening any violence on you or anyone else. If such a thing exists anywhere, please bring it to my attention so it may be removed and other action taken, if appropriate.

I will also not tolerate posts or comments wishing violence or harm…only Jimmy’s total financial collapse and utter loss of all influence. Plus, a soup line would probably do him a lot of good toward actually losing rather than accumulating fat.

So, in a roundabout way, we’re wishing him health, and as we know, it’s not a weight loss journey, it’s a health gain story. 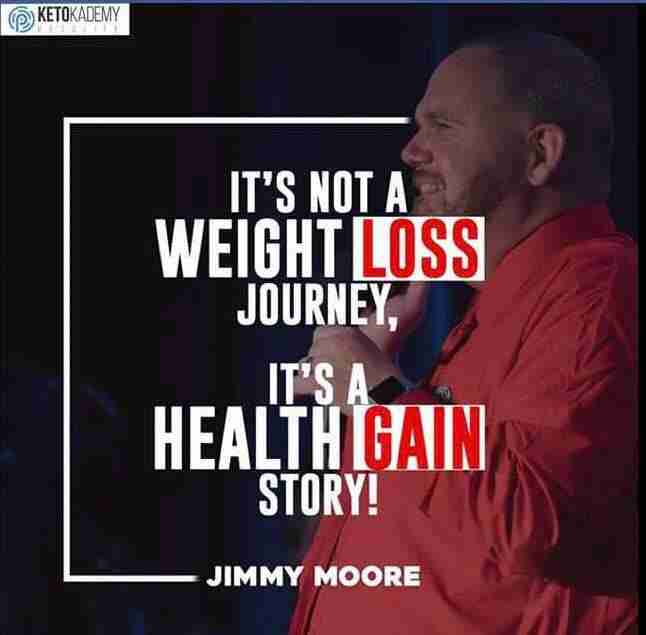 Here’s where the plot thickens. Recall in those previous clips where Jimmy announces they’re instituting a moratorium on all new memberships and he also indicates he’ll be posting the “threat” in comments. Well, I was able to get that, too. 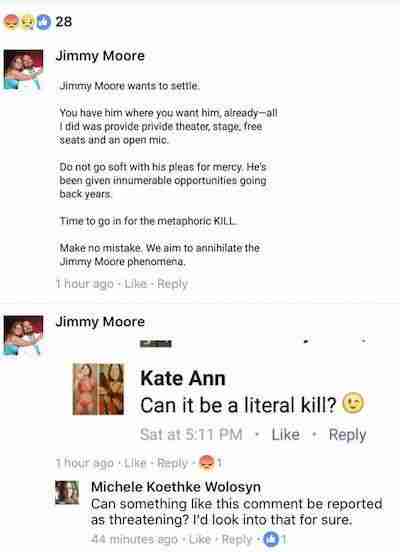 Here’s the thing, though…. 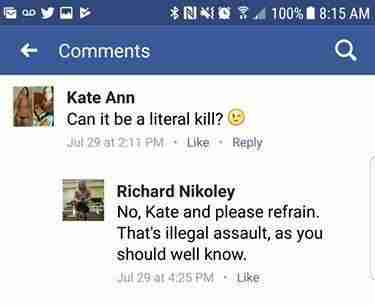 So, spies in his midst have managed to get me Jimmy’s comments after he admonished his membership to join this group in order to report it (I’m not clear on FB policies in that regard…it’s a public group…not sure if you have to be a member to report). See my earlier post on that.

Anyway, see any difference in how he presented it, verses the whole context?

Pretty dishonest, Jimmy. Now, I said I was unaware, but had just forgotten this. However, since I issued that rebuke on the spot, I think it’s better to leave it up rather than delete it.

Then, another spy gets me this hilarious culmination, our featured image:

Ooh, this group is so scary, Jimmy has to basically make his own group completely clandestine. Only existing members even know it exists.

LOL. I’d say we’re having a pretty profound effect out there. 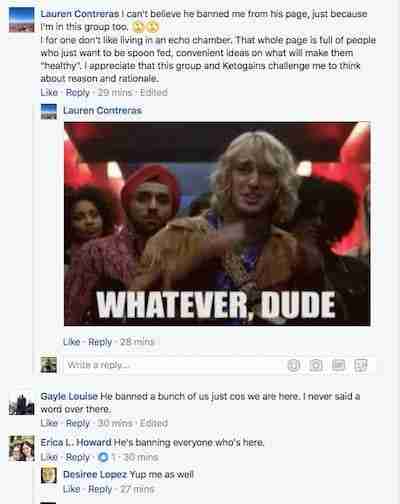 This is remarkable. Does he really believe he holds this sort of sway? Does he think that his own members, knowing this, are going to take kindly to being members under threat of expulsion simply for being a member of another group?

Keep the ketotardedness coming. We’ve a lot more mocking and ridiculing to do.

…So, that’s the drama as it stands now. Anyone with half a brain knows there is a huge number of members of Jimmy’s various outlets who’re very disillusioned with him and totally find Richard Nikoley’s Ketotard Chronicles highly cathartic.

Jimmy does not have anywhere near the solidarity within his own midst he believes he has.

Here’s what Jimmy is doing to people who join Ketotards, since it’s public, so he can see the membership. 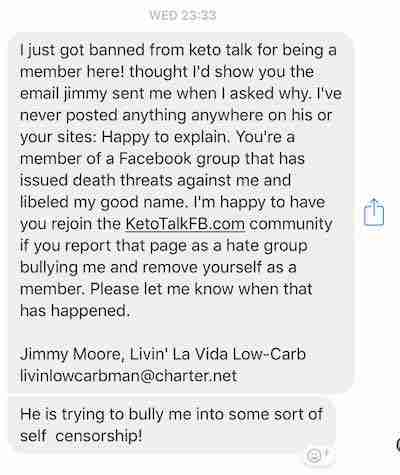 But, the plot thickens. 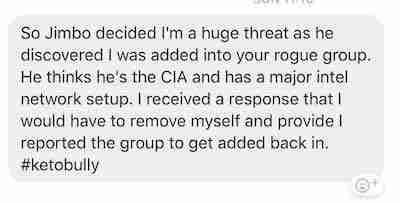 So, there’s another development to this story about Jimmy removing people from his groups, then messaging them to strong arm them into leaving Ketotards and also providing proof of reporting the group to FB to be let back in his groups so they can be told to eat more fat and less protein in response to every question.

Well, some of these people were innocent bystanders. That is, this group is public, and for public groups, any member can add any of their FB friends to the group, even without their prior knowledge or approval (you’ve probably been added to groups by FB friends if they thought you would be interested). So, then, these people get the missive from Jimmy or his admins.

Can you imagine? You post something to Keto Talk about how you’re having problems and not getting results per your goals, are told to eat more fat, cut more protein, don’t count calories, etc. (and buy stuff), an FB friend who actually cares about you and your goals adds you to this group, and then you get the ultimatum.

I guess Jimmy thinks that if he blocks enough people, nobody in the cloister will even know about Ketotards, so this scenario won’t happen anymore. So hilarious. It’s only going to get worse.

We should break 1,000 members today, starting from zero less than 2 months ago. And, one of my members is worth the brains of several of his, I’m sure….