Why Mixed Race People Never, Ever, Ever Identify As White: No Money In It 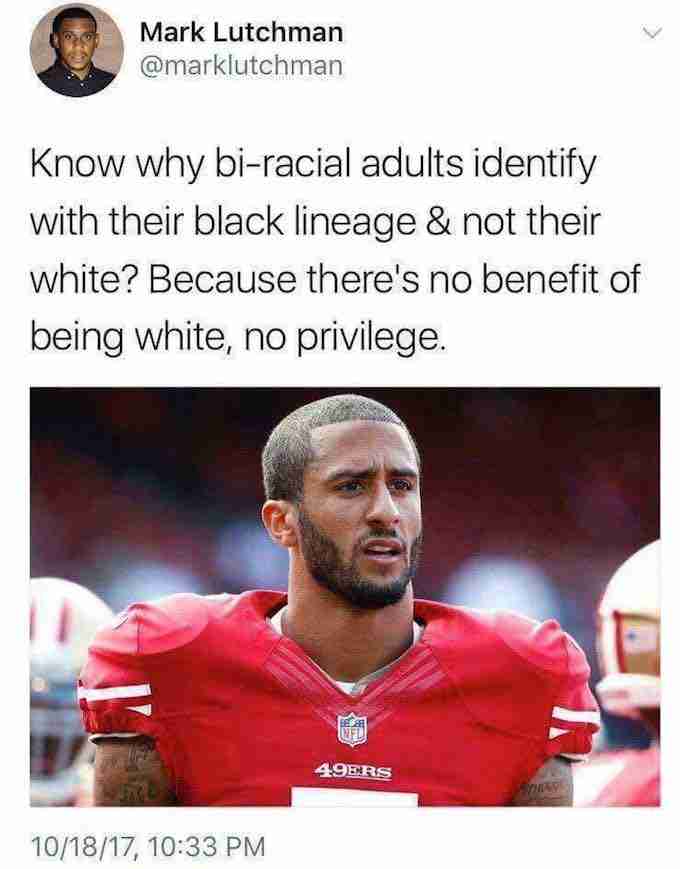 You just hate me. I ruin everything.

I make you feel fucking stupid.

I’ve known dozens of mixed-race folk over my life of 56 years. And I have never known…

…who didn’t tout the black, brown, yellow, or red in them while simultaneously downplaying the white.

…And you sit there and wonder why I laugh, and think that almost everyone on the planet is fucking stupid.

White folk are being taken for a big rocket-ship ride straight to hell. And it pains me that all the dependents are necessarily coming along for the ride.

It’s only by the grace of Western Civilization that the world still exists more prosperous than ever, and white folk created that—right out in front of everybody and everything.

Because, pretty much: if black, brown, yellow, or red were in charge, we’d be a wasteland by now, or at least all yellow (Asians are the most pure racist/tribalist of all races in my experience…but they love your money).

None have come even remotely close to developing the culture white folk have, beginning with the Greeks. Where in the holy muther of fuck! to you think racial inclusiveness comes from in the first place? White industrialism and capitalism. Capitalism is the most color-blind -ism ever. It capitalizes on talent, expertise, and results, competitively. Meaning, if you’re racist, fine, your competitor gets the clever black guy and you don’t.

This is all shit white people came up with, bitches.

I love being 100% white, of 100% Euro descent, of the very core of actual civilization—in spite of many sins along the way that didn’t need to be—and of those who used their minds to raise all boats with secular philosophy, industry, and technology. And to the extent that yellow has contributed to that (the only other civilization to do so), to their great welcoming credit, they mostly copied whitey (which is cool too…competition…baked into the cake).

Hip Hop culture doesn’t understand (too fucking stupid on every level). We don’t care how low you sink and in our indifference, you still sink lower, such that we might at least express a degree of hatred (you’re not worth the feeling). Keep sinking, worthless fucks. Same goes for the brown gang-bangers who can’t take a personal insult without creating a neighborhood war. Worse than my wife’s 5th grade girls she used to teach. There is no being more immature in the whole wide world than a brown gang banger. Nobody has more fragile emotions, including infant children.

This is ALL a function of culture!

UPDATE: I’ve had so far two morons who cared to comment that didn’t get the distinction between race and culture. One had 45 posted comments here and the other one was a first-timer.

Both were summarily dismissed and the former will never post here again.

Most people are completely stupid and approach posts like this with hubris—the intellectual original sin—and they never get over it. Until you do, you are lost to me, too stupid for me. It’s a theme. I’ve been at this a while.

Critical distinction between race and culture is essential and there is no other way, and it’s simple.

Race is race. Everyone is born of a certain one. But, everyone could choose any culture they wish. That race correlates with culture is just that, a correlation, and it is solidly the left, throughout much history, who prefer that culture and race are blurred and always conflated, not distinctive.

Back in the day, late 80’s, as the deck Officer on USS Reeves, I had 65 deck apes, enlistees too stupid to have any other rating…electrician, mechanic, electronic tech, even admin. Stupid deck apes. Half of them Harlem hip hops and half of them white midwest rednecks. It was hilarious to me how they always tried to be each-other. Then, I read Thomas Sowell, a black intellectual who explained it all.

Jesus, I get so tired of Dunning-Kruger fucks too stupid to even understand the depths of their ignorance. I’ve been at this shit for 30 years, just as intense, every day. Your bullshit only serves to shore up my focussed misanthropy.