Stash: An Opportunity Cost Calculator On Your Phone That Makes You Money 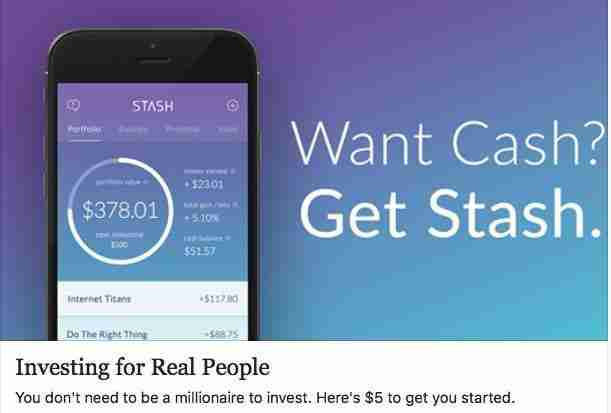 This is one of the coolest app tools that has crossed my space in a while. You’ll see I’ve added it to the sidebar because it’s worthy of being there and I’ll explain exactly why.

Yes, I blog mostly about Bitcoin and other Cryptocurrency these days and have set up a Patreon to do that formally. But, some of you, for reasons that are your own, aren’t quite ready for that. But everyone ought to save. Many of you have 401K and variants, IRAs, savings accounts, and brokerage accounts.

Here’s a brokerage account for your smartphone where virtually no investment is too small. Think of it as linking your piggy bank —or in my case, a milk bottle—to a brokerage account with about 30 Exchange Traded Funds (ETFs)—from aggressive  and volatile to money market—to choose from. You can even invest in silly “socially responsible” stuff if you like. It’s under the “I Believe” tab. 🙂

If you might rather have the $5 you would have spent on a small popcorn at the theater go to a Warren Buffet Fund instead? There’s an app for that, right in your pocket. A robotics fund? Yeah, that too.

…And this is really the genius behind the app. Giving you the motivation combined with the ease to make opportunity cost decisions on the spot and execute them on the spot. From the link:

Opportunity cost refers to a benefit that a person could have received, but gave up, to take another course of action. Stated differently, an opportunity cost represents an alternative given up when a decision is made. This cost is, therefore, most relevant for two mutually exclusive events. In investing, it is the difference in return between a chosen investment and one that is necessarily passed up.

Or, in this context, the difference in return between a chosen investment and a sunk consumable cost that is passed up.

I stashed $16.50 yesterday from the time I signed up. There are two ways to do this:

I did it both ways yesterday. Two things I gave up entirely and Stashed instead. One was having a cocktail before dinner. $7 Stashed. The other was that I would have normally had the ribeye for $29. I went for the pork porterhouse at $24 instead. Another $5 Stashed.

You can do this on the fly, throughout the day, then the app will roll these all up into a single ACH transfer from your linked bank account.

Do you see how this could accumulate? I estimate that just based on a single day, I’ll probably Stash $300 or more per month that would have otherwise gone for stuff I didn’t really need, and that Stash is working for me in actual investments.

Now, here’s another aspect that will apply to some of you more than others. Do you have a social network? Well, once you hit the link and sign up, either via your desktop or iOS or Android phone, you can then share it, and when people sign up with that link, this is what happens.

So, I made an easy and quick $80 in under 24 hours, all OPM, but all from Stash and in fact, the 5 people who signed up got $25 combined themselves. Nobody lost out. Those funds, as well as the $20 I added myself for a total of $100, is in three funds: an aggressive growth, an aggressive R/E, and Sage-from-Omaha ETFs.

Going forward, I have it set up to do an auto $10 into the aggressive growth fund every week, and $10 deposit into Stash weekly that I’ll distribute manually based on senses at the time.

So have at it. Start turning some of your silly, worthless, go-nowhere spending into long-term gains.