What’s Been Up: The Personal Stuff And The Future

Two weeks ago we headed out by automobile. Five hours to my brother’s place in Tehachapi, CA, where we spent the night.

Then a few more hours to Vista, CA, the next day. Beatrice’s parents live there.

Early the next morning, Bea delivered me to the airport at San Diego where I boarded an Alaska Airlines flight (my favorite, along with Virgin that they just bought) and I jetted to Orlando, FL, non-stop.

I spent the first three days with a friend who moved from California to Orlando only a year ago and loves having left behind the commie state. We did airboats and I got my first taste of VR headsets. Vive: WOW! I’ll have you know that I made it through round two of a Zombie Apocalypse.

And then I checked into the hotel for The 21 Convention.

I spoke the next day, Friday afternoon, for an hour+. A friend posted a 4-minute video clip, fan footage. This is not official 21 Studios video production, which will be forthcoming in the near future.

So, here’s the deal.

The wife unit took me out to lunch with a file folder in hand. This was in early August. She retired from 35 years as a school teacher in June and had been observing me since, with a view towards the future.

She told me I was going to hate what she had in store for me.

The file contained a number of articles she had printed out that admonish bloggers to get compensated for what they create.

Many of the printouts were old and dated, some were new. But I knew one thing: putting up a pay wall would destroy this blog. My wife is not a regular reader, nor a particular fan—though she does love posts from time-to-time and what’s most important, she loves how I write—usually…not so much the vitriol. What’s more, she simply told me she’s watched the effort I put in and on some level, it offends her that I’m not compensated directly. She understands ad revenue and affiliate deals, but none of that is direct compensation from beneficiaries. Nor is it big money. And we don’t need big money. It’s the principle of the thing, for her.

But anyway, you don’t just start charging for what was “free,” and I’ll get to those scare quotes later.

I began chewing on it.

What if I just did an added-value thing? About the same time, I got wind of Patreon, a site for creators to create and receive direct compensation from patrons.

I sat here and created a draft presence for what was to be a hyped-up version of this blog, along with some vague idea of what might be for paid patrons and what might be free. I never got comfortable with it. I knew it would flop and I’d get excoriated over an attempt at something I didn’t really believe in myself.

I had an idea. What if I create a Patreon presence over something completely different? I floated the idea here, with this post: You Can’t Afford Not To Jump Into Cryptocurrency. It seemed to resonate and ultimately, I used that post as my hook for potential patrons.

In preparation, I began building a portfolio on September 3. I reasoned: people don’t give a shit that I got in at $618 and now it’s over $4k. They want to know what might be accomplished starting now. So, I created a portfolio  beginning that day, with Bitcoin and about 10 other Altcoins so far, new ones being added with each round of buying. Over the month of September, I’ve put about $1,000 into that portfolio. It’s well diversified and so, is holding its own in spite of tremendous volatility. 30% swings in a day’s time are not uncommon. The more diversified I make it, however, the less volatile. 10% swings daily are more common, now.

I launched the Patreon Project on September 8, having no idea if it would flop, I’d be ridiculed, or it would take off. The launch post: Cryptocurrency and the Nature of Modern Money.

I did my Patreon different than most do. Most have a number of different reward levels, so the more you pay, the more you have access to so-called premium content. That rubs me the wrong way. How would you like to subscribe to a magazine and once you get it, there’s blank pages and you find you need to get a premium subscription to see those?

Accordingly, I have one single reward level. Here’s what it looks like: 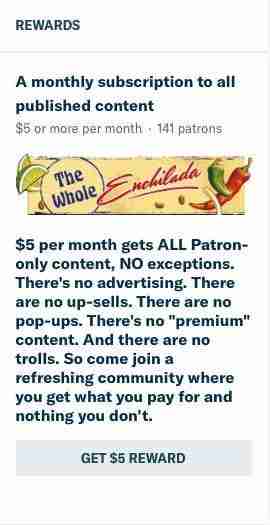 See, over the course of this epiphany, it dawned on me that folks will go out of their way for “free,” but then waste untold time and endure enormous levels of over-the-top ad bullshit so they don’t have to spend a single “Starbuck” to get to the content they seek. Of course, one can’t be subscribed to everything, but even that’s not the real issue.

The real issue is that whether you subscribe or not, you’re getting bombarded by ads and upsells. Subscribe to the New York Times, Wall Street Journal, or whatever. You’re literally paying to be annoyed constantly with advertising. It’s particularly awful on a tablet where a good percentage of the time, trying to kill a pop-up actually shuttles you over to the link. It’s just awful. It’s a life drain.

There’s got to be a better way. I think it’s moving that way. For instance, we cut the cable TV. No more $150 per month to be inundated with ads. And DVRs suck. I don’t know which is worse, watching the ads, or doing the fast-forward and then having to go back and forth to get to the beginning of the next content segment. Hulu is one of the services we subscribe to. Originally, we had the basic. One night, I found that for a measly $5 more, we could have all the same programs next day, but ad free. It literally does a short pause, then comes back on. No more futzing with the DVR remote. Duh.

I could go on and on about this issue but suffice to say, I’m in pursuit of a better way. Direct payment of a reasonable amount, no ads, no upsells, and no trolls. Trolls never pay to troll.

…So, here I am, 28 days from launch and there are 141 people who’ve signed up for clean, ad-free, no-troll content with a specific purpose: to make money trading and investing in cryptocurrencies. Douglass Casey, a very well-known investment guru I first read in 1992 thinks crypto will change the world and Bitcoin will go to $50,000.

That’s $705 people are willing to spend on my take, signed up over the course of less than a month. Patreon takes a very reasonable 5% of that for providing the platform. My goal is 5,000 patrons for $25,000 monthly and that would match what I used to take from my business back in the day. It’s not unprecedented. Some Patreon creators are already pulling in more than $50,000 per month. Jordon Perterson, the Canadian psychiatrist, psychologist, and sociology guru hauls in $68,000 monthly.

So, rather obviously, I find myself at somewhat of a crossroads. Free The Animal is my baby. The blog has been around since 2003, I’ve written over 4,600 posts. There’s over 100,000 comments. But, I only have so much time and the Patreon deal is exciting and enticing, and it’s not only that I created it and everyone listens to me and my latest. There are plenty of crypto traders and investors who have signed up so it’s a burgeoning community where information gets shared. There’s not only my posts, but any patron can post, and any patron can comment on those posts.

And all in an ad-free, pop-up-free, upsell-free, and troll-free environment. So refreshing.

…Anyway, thought I’d just share all of that, get it off my chest. I have people to thank, too.

So, I don’t know, going forward. Maybe a second Patreon presence to migrate the best content from Free The Animal to same kinda deal. Think “Free The Animal Unleashed,” or, perhaps, uncaged. I’m very good at producing content regularly because I love to do it. The crypto thing has shown me that I can be really focussed and disciplined. I don’t even use the word “damn.” Totally clean and pro. People are paying for crypto insight, not insight into my emotions.

But, I’m just wondering what I might be able to do in the NSFW environment, getting paid to produce high-quality rants.