My Change in Heart, Mind, and Focus: Cryptocurrency Vs. “Paleo” or “Low Carb” Diet

A few nights ago I texted someone y’all know.

BTC just over 14k now. Started the Patreon gig when it was 4,500. 15k will drive the final nail into diet blogging for me.

Whereas my normal gettyup time now is 4:30-5:30am, I languished insac until 8am the next morning. After clearing my eyes, I checked the markets first thing, just as I used to do a dozen years ago when trading the S&P 500 options (SPX) on the CBOE. Here’s what I saw. 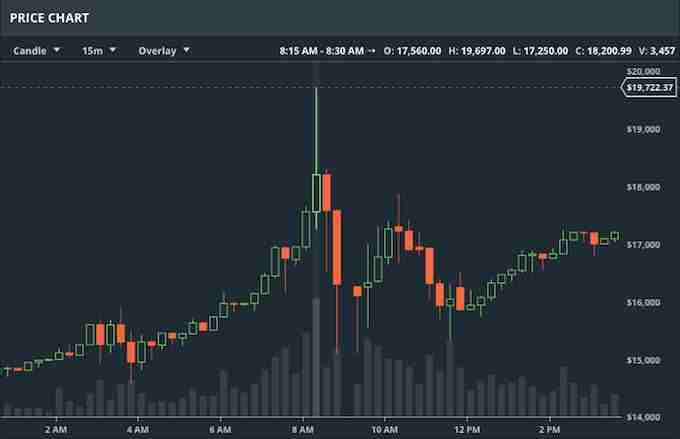 15K hit when I was sleeping and the price level said ‘goodby, for now.’

Not even a week ago, I was talking about maybe snagging another stake under 10k. I did that. $500 more into bitcoin.

But honestly, I was just looking for a clever excuse to use for what I knew for certain was coming anyway.

…Last June 9 my wife, Beatrice, retired after 35 years in the school district. For about 30 years of that time, she taught 5th and 6th grades, sometimes split classes—where she taught two grade levels at a time. But she always wanted to work with kids on a more fundamental, underlying level. She went back to school herself, after more than 15 years of teaching, and got her master’s degree in counseling.

There were no such jobs to transition to.

Eventually, in 2005—10 years of waiting later—the district experimented with academic counseling, with an equally experimental budget. It lasted two years. Her academic counseling program was hugely successful and parents and PTAs loved it uniformly and actually fought for it, but failed.

You can’t fuck with Mother Nature, and when budgetary constraints come along, the very first thing administrators do is protect themselves and find ways to cut the budget for the kids—that is, cut the budget on fulfilling their mission. Whenever you want to look pure and true evil in the eye, think on that.

Bea always took it in total stride. She’s completely unlike me, with an essential amazing grace and a roll-off-back nature like crazy and, it’s impressive. To her, it’s simple; she’s not much interested in the prescient, apropos, and most clever vitriol I can bring to bear with a wink and twinkle of eye on blogs and facebooks. She might laugh, but is never particularly enamored. Her “serious side” operates on different value standards and timescales than does mine.

She could still do that “job” in the classroom. It’s about getting to the nitty gritty. It’s finding out why the kid isn’t curious, is stressed—or whatever it is that’s preventing him or her from doing what kids naturally do, which is suck up information like sponges, with enthusiasm.

I’m helpless when it comes to this sort of true love, in admiration of her essential humanity in a context of a human life where I’m easily Mencken about a whole lot of stuff.

“Every normal man must be tempted, at times, to spit on his hands, hoist the black flag, and begin slitting throats.” — HLM

The female is the absolutely essential taming influence for the male. Moreover, the female has a dual role in managing the “problem” of the male species…

The best of the females find ways to spur on the males they influence to great, greater and in the rare cases, the greatest. There’s almost always a female behind the greatest male—and that’s just biology on the most fundamental hand, and being social enough on the other.

The essential value of the female is to make the male social enough. I’m not being factious. The smartest females know how to make this fundamentally essential thing happen and it’s not for me to understand. It’s rather to be smart and prescient enough to comply with female when boundaries of paths are reached; or, in my case many times, better paths enlightened for me.

Thanks, chicks. I literally, couldn’t do it with out you; but, I’ll still be a male of the human species which means you all have endless work to do. And why would you not? I think it’s a wonderful and natural trade.

I guess I digress.

…A few weeks after retiring last June, Bea took me out to lunch with a file folder of outdated articles about making money blogging. It’s not that we particularly need more money. What it was is that in the space since retirement, she had observed me more closely than ever before.

“Richard, you need to get paid.”

Me: “Well, I have Amazon, Google, a couple other ad things, and Elixa. It comes to 1-2K monthly, on average.”

“You need people to pay you, for all the effort, time, and attention you put in.”

To her, as a never-blogger nobie, it was simply a matter of setting up a paywall that day, on a deal that’s 4,500 free posts in the making.

I knew that would be a flop, of course. But the underlying and essential idea was something I could consider. I’d really just never thought about it much. I kind of like not caring about money a whole lot. I used to care way too much and it resulted in bad things.

Through a series of circumstance I found Patreon. Initially, I thought “Okay, I’ll do a premium diet thing and bla bla bla.”

I hated the idea, knew I’d get killed for even trying. All I could do is stew, caught between my wife’s wishes and the impossibility of delivering, though I knew in the end she’d be OK. But what proper male of the human species doesn’t want to strut around and show off his colorfully erect peacock display to the female he’s nested with?

…In August it came together, something happened. Bitcoin, or more generally, cryptocurrency. 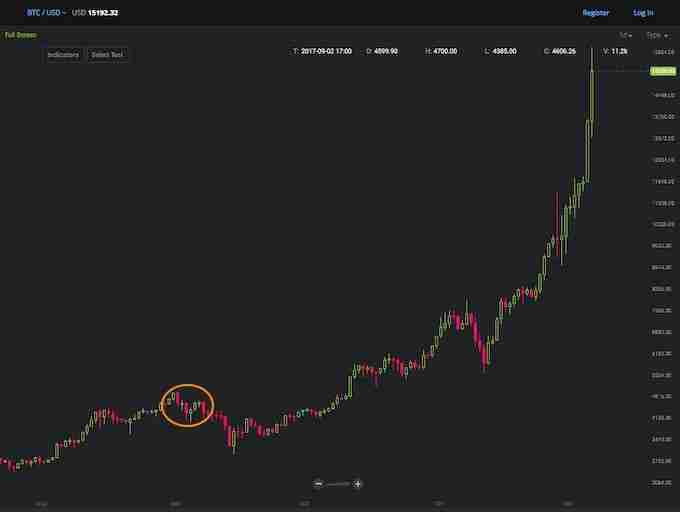 But it was rather subtle. While I couldn’t predict the future, I could easily identify a rising tide and it’s exactly what I saw. I just detected an increasing level of buzz all around me. Buzz is essential to bring it mainstream, where everyone is invested and liquidity is given. That orange circle is when I went in principally with this change for my future, with my female. I say principally—and not all in—because I wasn’t yet ready to dump my 10 years of cred in diet blogging.

So I placed a small bet and got to work creating a couple of posts to launch it on the Patreon platform where, as I reasoned, I could at least show my caring wife that I gave it a shot, and did it as smart I could think to do it—preserve what’s there already while venturing out to something new for a good she’s finally happy with.

I still remember day 1. Ground Zero. I immediately got a few Patrons at $5 monthly and they kept trickling in. I recall telling Bea at the end of the evening, when we were at 17, that we’ll be at 20 by morning. A hunerd bucks gross.

But do you know of what I’m most enamored? It’s that I’m a male of the human species that gets to do what he wants, but for some inexplicable reason, cannot help but try to please the female I love so much, and am helpless about it. Yea, she checks regularly, gives me updates on the latest Patron count…

But it’s not all I win. There’s the actual deal, and, how does it compare with what I’m leaving behind, diet blogging?

How might a change in focus change your life? Well, I set out September 2 to find out—a week before launch—and this is the result after 3 months. It’s a diversification, about 40 individual and separate crypto investments, not an all-eggs-one-basket. 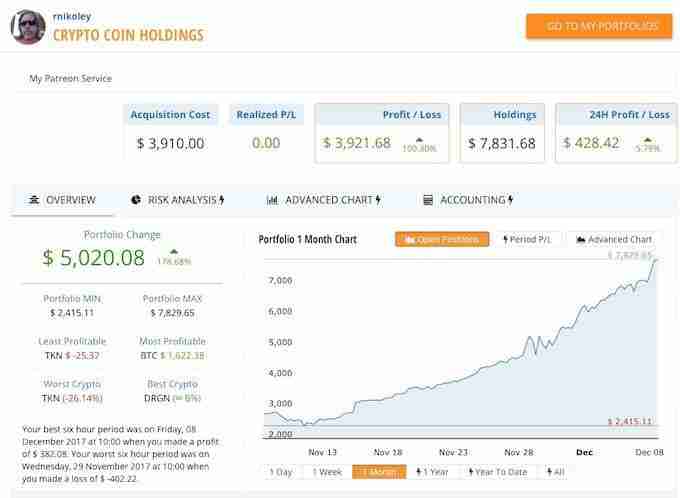 Yes, of course I’m in Bitcoin and it’s actually the biggest weight of the portfolio (50%ish). It’s a 100% crypto portfolio of about 40 crypto assets, some  green as much as 700% since I took a stake. Only about 5 are rouge currently. To get this list—where others try to sell you a $3,000 newsletter subscription for just one tip—you can get all 40 for $5 per month, no catch.

I’ve been up 80-90% for a couple of days and am happy to have been able to snap a shot right at the 100% mark, which is weekly buys into crypto from early September to just last week when I jumped to put $500 more into Bitcoin because I figured my limit order to buy at $8,001.01 would never fill, so I cancelled it and just took the market at a bit under $10k.

Of course, things depend. I finally got Bea to put just $250 into Bitcoin a few weeks ago in her own account and it’s worth $600-700 now, depending. She gets a kick out of looking at it and is beginning to get over that it’s too complicated to contemplate. I have an app for that, actually; where I show you how to get in now, today. Not tomorrow; today. That post is on Patreon but it’s public, so you can test drive if you like.

I hit these deals all along the way:

Where I end up:

So, basically, 10 years to come up with something decent foundational, and other than the few ad-ons here and there, that calories count.

I spent 10 years and 3,000 posts coming to a full-circle realization that you’re fat because you eat too much too often, yet you complain you’re too hungry. Well then, you’ve gotten yourself there though self-medicating with junk food for decades. You have to do rehab or detox, or whatever. You have to reprogram your stupid dog brain.

Anyway, I just got a better gig. it doesn’t mean I’ll not keep up Ketotards, do likes and comments on FB, or any of the other things. As to this blog, I’ll post now and then, but I’m pretty sure it’s mostly going to be about the real food I cook every day.

I have months of really awesome food pics, only shared on the Facebook that has seen fit to block me 9 times, the latest of which ends tomorrow. In the meantime, I’ve come to understand what a disvalue Facebook is; it’s tops. I’m not going to get into it, though. I’ll just use it as a means to get people to click away from it, and spend their money elsewhere.

My energies are in turbo-mode elsewhere, now.