As you can see, above, the name of the blog has changed. It’s been Free The Animal for 10 years, was two different names in the four years prior, and it’s time for a change so as to better reflect my intentions going forward. As you can also see by scrolling down the page, I’ve been blogging about crypto and money mostly, for months now. This, owing to my paid gig on Patreon, now just shy of 500 Patrons at the time of this writing.

Yea, imagine that. Upwards of 500 folks willing to cut lose with $5 per month in order to participate in a troll-and-bullshit free environment with no ads, pop-ups, up-sells, or “premium” content—euphemism for “I’m just going to charge you more for this because I can.” Nope, it’s very egalitarian of me. Everyone gets the same deal.

So, anyway, I’m never about singular focus on a blog and as always, blogging any fucking thing I want is always on the table. TheCryptoKitchen is just a way to narrow the focus just a bit, give some sense of direction. After all, who doesn’t love good food and money? Amiright?

I’ll tend to stay away from all the goddammed dietary nonsense, focussing instead on good food from the kitchen. Simple. Let it just speak for itself. This was always the most pleasurable thing about the whole diet and health thing all the way back. Not only did I get the pleasure of shopping for it, preparing it, and then eating it, I then got to tell the story through pictures.

On the crypto side, I get to write about what is increasingly taking up my life and times in a more work sense. More on all that, later. This is a kitchen post.

So let’s cook. It was spur of moment last night, Tuesday. I realized it had been a week since good steak on the grill. At the end of our 10-day motorhome excursion over the holidays with five overnight stops along the way, the last one was a night in Santa Barbara in order to break up our return from Carlsbad, CA to our home in the Sierras. I invited my friend Dr. Mike Eades over, shopped, and got cooking. Unfortunately, MD had choir rehearsal so couldn’t attend. 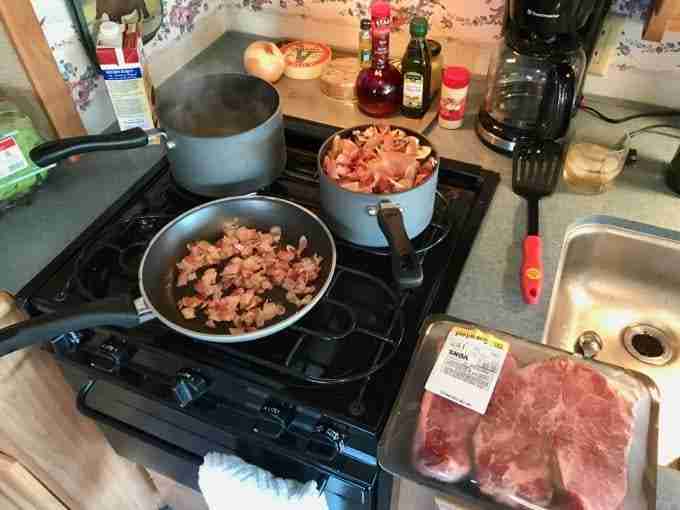 The NY Strip looked better than the ribeyes, so got those, which were cooked on the mini-Webber with charcoal—a lost art, given gas, now. Also on the menu was Texas-style green beens, roasted fingerling potatoes, my shallot-mushroom beef stock reduction sauce, and a butter lettuce salad with my Dijon vinaigrette. Unfortunately, no dinner service pics, for some reason.

But not this time. You want pics, we got pics. Up top are the essentials. I also did a simple browned butter drizzle. No, not a cube of butter per serving. A 2-pat portion per serving—as though we’re sane or something, not Ketotarded. 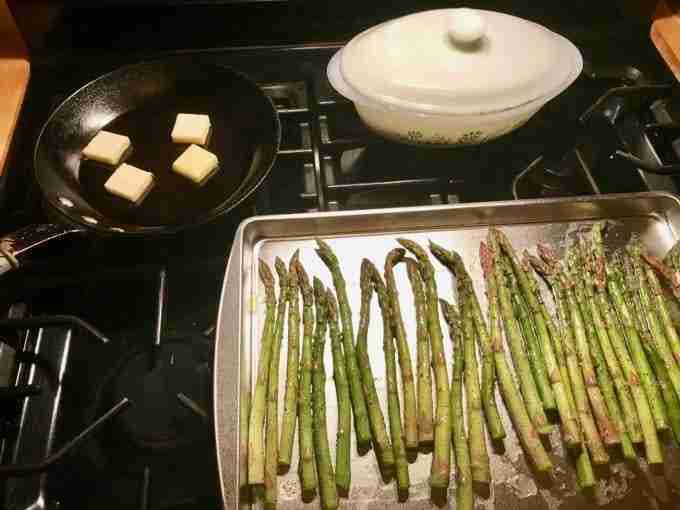 You just can’t go wrong with roasted asparagus. I only ever get the thin ones and when I see them, it almost always overrules any other side-option I might be thinking about. So simple, too:

Done. There’s also mashed potatoes. Everyone knows how to make them. In terms of added fat, I calculate about 1-2 pats of butter and 1/4 cup whole milk per serving. I do not use half & half nor heavy cream. Just don’t need it. Typically, it’s being served with a reduction sauce anyway (my sauces are fat skimmed for better texture and flavor). I do big batches of mash now, so I can easily reheat. In this case, the casserole went in the oven alongside the asparagus. Works great, very convenient, and gets more mashed potatoes in your belly because, who doesn’t want that?

Shall we proceed? Okay, these are not done on charcoal, but I happen to have the Char-Griller Grillin’ Pro 40,800-BTU Gas Grill with three close-together burners in a small space that can get it up to 800 F internal. I also have the offset charcoal and smoker attachment. Grill mastery. 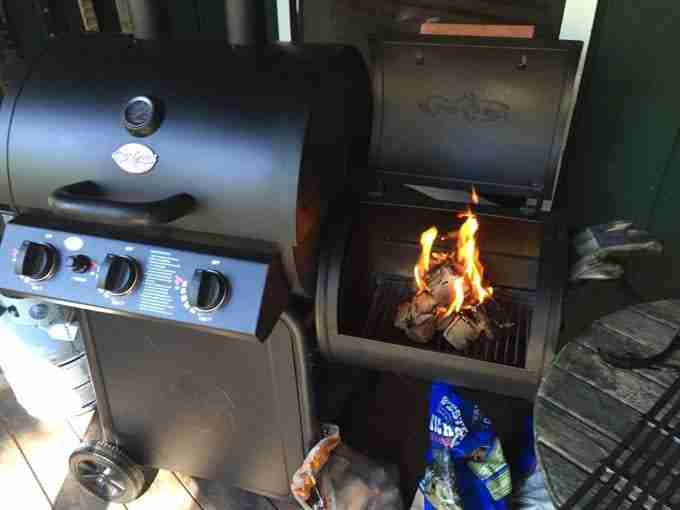 Last night, it was a tight schedule so gas only.

I use various methods of grilling, depending on the cut, how lean or fatty, etc. In this case, pretty fatty ribeyes. So, all burners on high, grill is preheated to full on way up, 700-800 deg internal. Toss ’em on, cover for about a minute, open up, move ’em 45 deg for pro-level grill marks, then cover about another 1-2 minutes, until you really hear the fat poppin’ and and sizzlin’, then open it up so as to not overheat the center for medium rare, allowing the fat to char. Then turn, repeat the process, but not so long covered. Open it up and do the finger test until perfect. 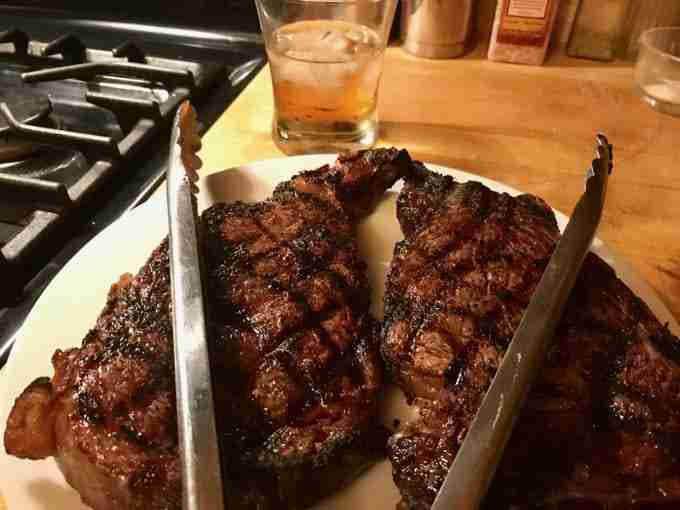 And now let’s plate up, including just a drizzle of that browned butter. 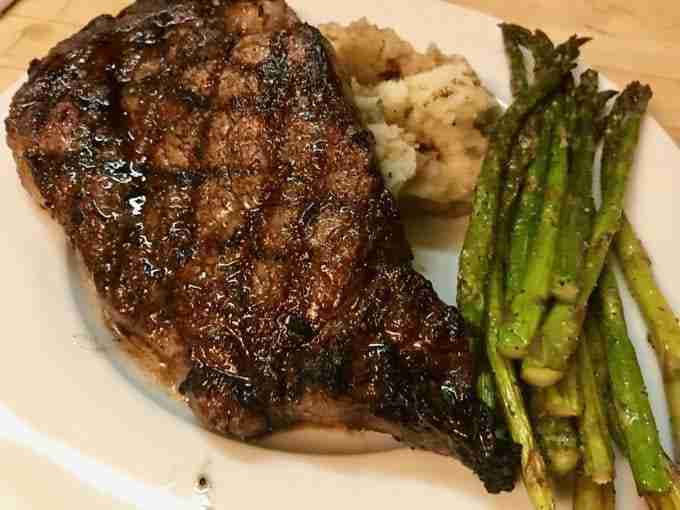 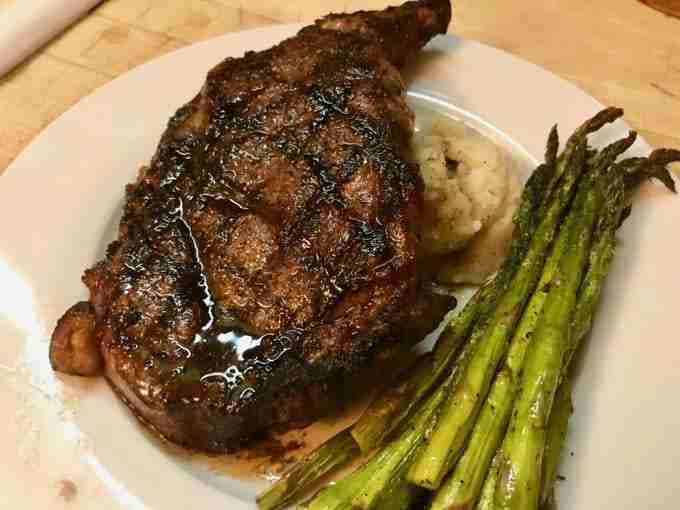 Now and then, someone may have doubt that my steaks always come out how we want them: generally medium rare for ribeyes, NY strips, sirloin, and the various flat iron, hanger, and flap cuts. For filets, usually rare, and I’ll sometimes do flat irons rare as well. 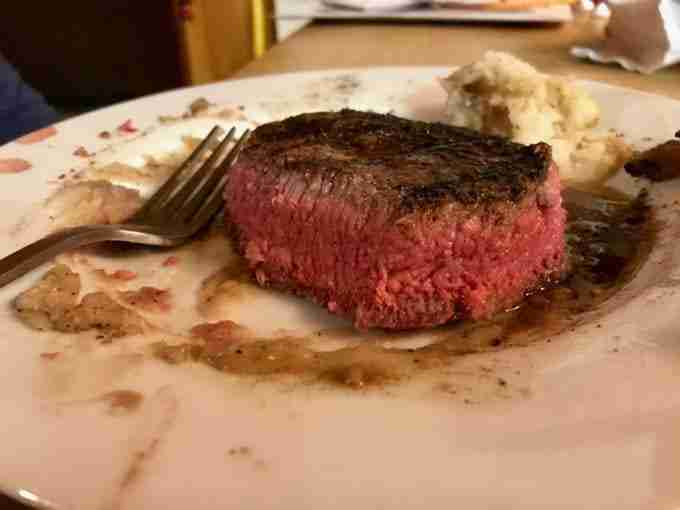 And so that will do it for this Kitchen installment. more to follow in the days to come. Also, yes, I will be getting the domain name sorted, thecryptokitchen.com, and freetheanimal.com will just forward once that’s done, so you’ll still get here either way.