The Abortion Of “Little Richard” Nikoley 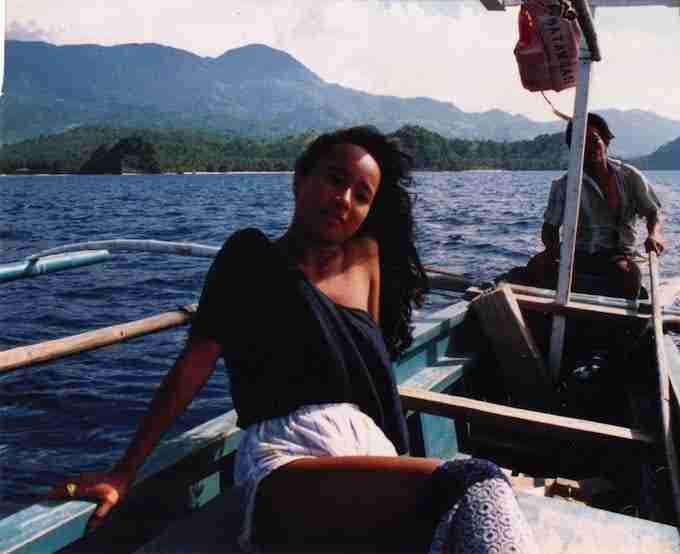 Some call it introspection. Others, Stewing; and still others, reflections. In this particular context, there’s only one thing that ties all of the denominators together and that’s human regret, perhaps sorrow. It’s less important that you can do anything about it than whether you have the capacity to reflect on how you might have done it better and then, in understanding, put it down for others. There are good people at this sort of stage in their own lives today. There will always be such people.

This is neither a pro nor an anti-abortion piece. It’s the recognition of a loss and how that loss came to pass.

I’ve had a yearning to write about this for years. I could never do that while preserving, and not aborting, a home life—writing it how I would, on my exclusive terms as to how it really went down, all the details.

How about how young and hot Lilly was? She was about 23, I believe. She spoke her native Tagalog, a couple of other dialects, English, Swedish, and German—having just come from living several years in Europe with a Swede, an engineer who travelled a lot, which is how he had met her in the Philippines. That’s basically all I know about that relationship. 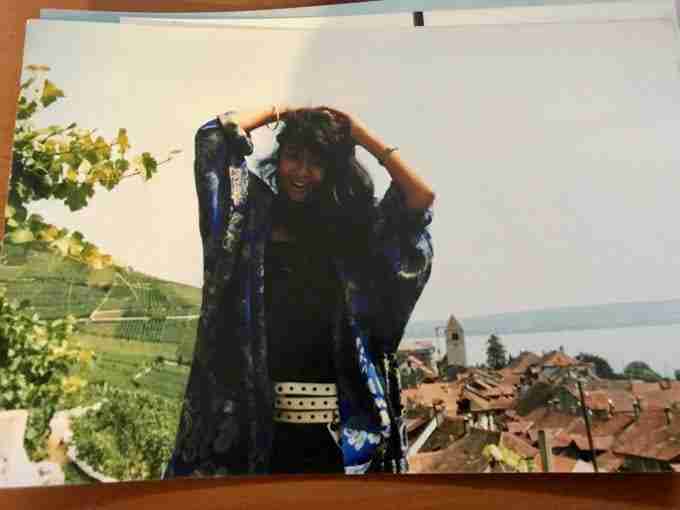 She made me laugh. Lots. She was perhaps the most smiling, bubbly chick I’ve ever known. Never in a bad mood; seemed to see the funny side of about everything and if there wasn’t a funny side she wouldn’t dwell on it. A total lover of life.

…But she behaved often in ways that irritated me and I became less of a gentleman and was sometimes mean to her, verbally. I’ll get more into that later.

She was a 4-month, live-in monogamous partner in my house on Morito Beach; Hayama, Japan, 1988, where I was a staff officer with the United States Seventh Fleet, permanently embarked on USS Blue Ridge (LCC-19).

And she was sexually insatiable.

She did well, ruling me with her wonderful, wispy-haired pussy and firm little cute ass (OMG); always with a friendly, disarming smile and the ever-present enticing look in her eyes. 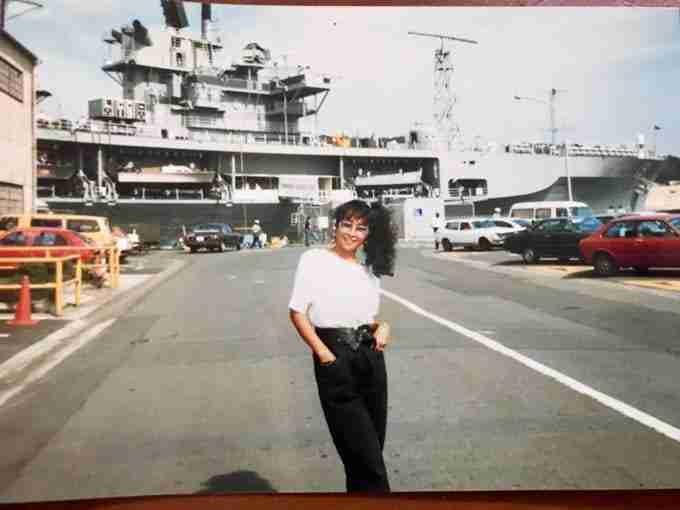 With Blue Ridge in the background

I met Lilly through a shore patrol guy on the Yokosuka Naval Base, a friend of mine. He was married to a Filipino girl and Lilly was her sister, there visiting. We hooked up the first night and she moved in with me the next day. Yep, gotta move quick; there was a 4-month deadline.

It was pretty fucking wondrous at first, until sometimes irritating the living fuck out of me, too. She was a complete and utter delight, but at times, too much of a delight. I’m 27 at the time. It’s the winter months in Japan, 1988.

Her sexuality was totally playful, in an enticing, excited kind of way as though to signal, man, am I going to have me some fun now! That first night, once I got her fully naked, what does she do? Nothing I’d ever experienced. She jumps up, stands on the bed, and starts jumping around, dancing in a frolicking manner, smiling and laughing. It’s a great little video to preserve in my mind’s eye.

The sex was fun and fantastic, always. She had no difficulty at all achieving her pleasure. And if I wanted to pleasure myself while watching her, it was always “Richard, no! Don’t waste it. That’s for me!” Ha, a selfish little nymph she was but therein lies a lot of the pleasure of the whole experience. I never had to concern myself whether she was getting pleasure. Everything about sex gave her pleasure. 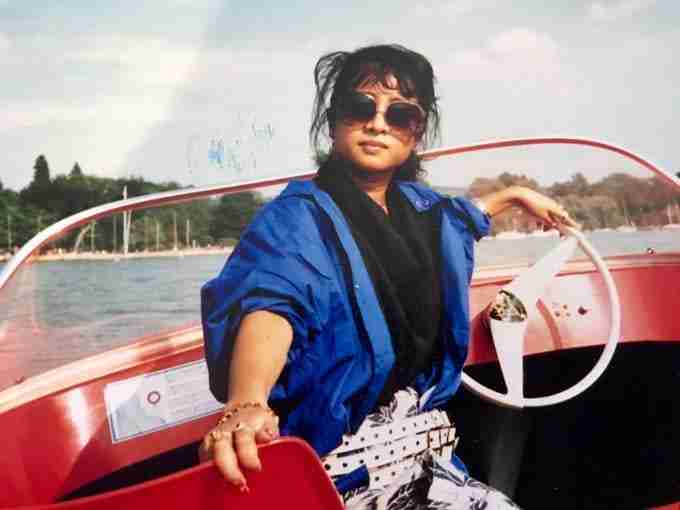 And so yea, with that information one might think she’d be the sleep-around type, but nope. Total home body. Typically, I’d drop her off at her sister’s in the morning on the way to the ship and then, when I got back in the late afternoon or evening, always rice in the cooker, freshly cooked fish (meat sometimes), and vegetables. She loved to eat her fish and rice in the traditional Filipino way, with her hands. I don’t think we ever went to a restaurant once the entire time. She’d have me take her to the market where she’d shop for us, and also for her sister’s family.

When she did stay at my place rather than be dropped at her sister’s, she would occupy herself cleaning the house (always spotless, fresh linens every few days, clothes always clean) and there would always be a nice dinner ready.

And, she was always naked when I got home. Always. Usually cooking and so with her back to me, she would bend way on over, and look back at me with a smile.

In one memorable instance which makes me laugh to this day—and I hope it makes you laugh too—I was unable to sleep. We always slept buck naked together, so I just threw on my big white terry cloth robe and went downstairs to watch TV. I’d rented a movie and so I popped it into the VCR and started watching. And of course, within minutes she’s right down there, naked as usual. She sits next to me. “Do you want to play with my hamburger?” Yes, that’s what she called it. Sometimes, when I asked what she did today, “oh, I counted the hairs on my hamburger,” as she bursts out laughing.

But I was interested in the classic film I was watching so kind of ignored her. She’d have none of it and so there she is, on her shoulders and knees in front of the TV, that rock-solid little brown ass staring right back at me, as I’m watching….yea…The Bridge on the River Kwai. I dunno, just something about that whole setting and scenario cracks me up.

So I put up no further resistance and wonder if I’m the only guy to fuck a hot chick doggie style wile we’re watching The Bridge on the River Kwai. 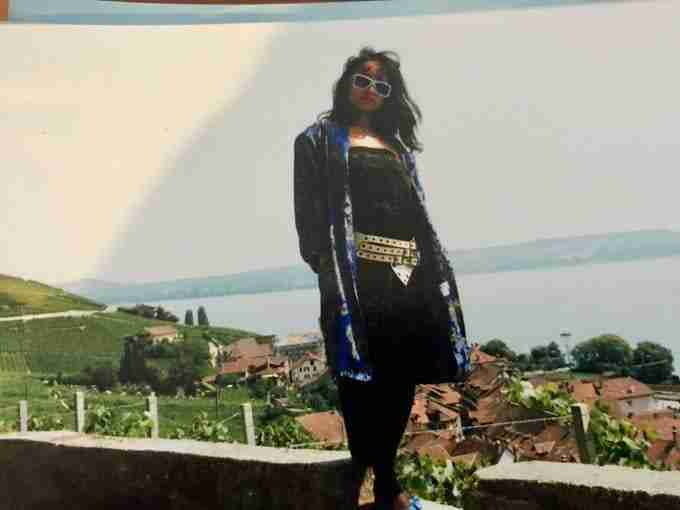 Unfortunately, all was not paradise. She wanted so much sexual attention from me that it became tiresome after a couple of months and I would get impatient and a bit mean with her. I had realized by then, I suppose, that I could not possibly live like this indefinitely. She would usually smile, not take anything I said seriously, and just keep trying. I wish I had just taken it in stride, enjoyed it for the time she was there—before her tourist visa expired—and not tarnish the memories of an overall crazy and wonderful experience—because I was an asshole to her too often.

It never seemed to hurt her, until the very last time. Our final night together. Her flight back to Manila was to be the next morning about noon. So, I booked two rooms at The New Sanno Hotel in downtown Tokyo and drove her, her sister, and her bro-in-law up for that evening where we had some dinner, and then she wanted to play the slot machines in the hotel. And I don’t even remember what it was she was doing that was annoying me, don’t even remember what I said when I snapped at her. What I do remember is knowing that I had hurt her, and that finally she shows it. Her final night. What an asshole. And to drive that reality home, it was the first night since we had met that we slept together but didn’t have sex.

The next morning we drove out to Narita for her flight. It was a loving parting, but not the bubbly loving Lilly. No talk of returning soon. And I never saw her again. I don’t even remember her last name so I have no way to check in on her.

She didn’t know she was pregnant at the time. Not long after her parting, maybe a week or two, she called me from the PI and we had a pleasant conversation. She was pretty bubbly, but there was no talk of a future, not even of getting together when Blue Ridge would next be in Subic Bay, visits being being pretty frequent. Some little time later, she called again. I’m not sure whether she told me that she was going back to Sweden with her former boyfriend or not, or whether I heard from her brother-in-law that she was already there.

Then one day I received her letter, along with a copy of the ultrasound showing “Little Richard” as she called it. I believe she was about 2 months along when she terminated it. The letter was nice, she thought I should know, she was doing well, and that was it. I never wrote back. That afternoon, Blue Ridge set steam to go from the Yokusaka harbor up to Tokyo, a couple of hour’s voyage, to host a dignitaries gig on the deck of the ship.

Afterwards, I went out on the town with some fellow officers and I remember sitting there on a sofa in some bar, by myself, just reflecting, and that’s when I wept. And then, I put it out of my mind.

…My position on the issue of abortion is that it’s a woman’s unequivocal and exclusive right to decide one way or the other, regardless of the father’s wishes. However, men should have a right to abortion as well, by declaring that they will have no part in supporting the child, which terminates any right to later have anything to do with the child, unless the mother decides to allow it. Fair, simple, and equitable.

This does not mean you have to like it. It’s just a fair way to deal with the issue. I dislike the whole abortion debate because on the one side, you have people acting as though it’s just the greatest thing in the world to get an abortion—you’re like some pink-pussy-hatted hero—and on the other side, you’re a baby murderer. There’s no nuance.

So, I don’t begrudge or shame Lilly because she got an abortion or that she did so without telling me, asking for input, or extending me any opportunities to offer to be a part of it.

I shame myself for the way I treated her too often. Did she call me from PI those two times after parting, knowing of the pregnancy, and testing to judge my attitude and finding nothing there, decided to not tell me? I’ll never know exactly why she didn’t tell me, but I’ll also never know whether it was because I was an asshole and there was no use or point in it.