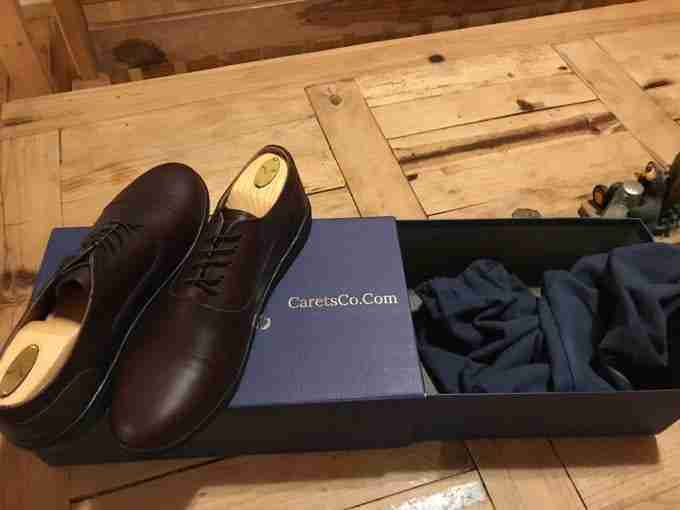 Way back in August, 2011 and immediately after my presentation at the Ancestral Health Symposium at UCLA, I was approached by a young man, Mountain Evan Chang, about shoes. It was ironic, because I was barefoot at the time. But Mountain knew of my thing for minimalist shoes.

Turned out that he was trying to develop a line of minimalist men’s dress shoes. In other words, develop hyper-quality dress shoes you could wear with pride in any formal or even business-casual setting—ones with a thinner sole and no heal platform, and very light. By that time, many of us had had quite a few laughs seeing pictures and videos of people wearing monkey-footed Vibrams with a suit—even getting married in them. So, he asked me a bunch of questions, took notes, and asked if I’d be willing to try them once in production.

I forgot about it. Figured: big long shot anyway. It must have been a couple of year and low & behold, he did it, and mine were on the way. 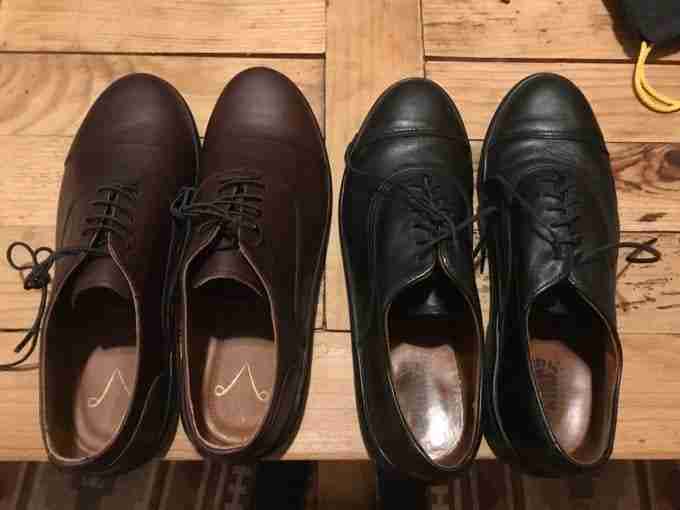 Version 1.0 to the right, in black, the new v4.0 to the left, in brown. Initially, they were branded “The Primal Professional,” but he has expanded his reach and rebranded them “Carets.” Here’s the website. One would hope that a colloquial branding occurs such that in business or dating gigs, they become referred to as Carrots. Get it?

But how impressive, right? Young man takes on the daunting task of developing, manufacturing, marketing and directly distributing his own high-quality dress shoe for men in a cobbling tradition centuries old. Something that can be worn with any suit in any formal setting, or, looking good with a pair of blue jeans or khakis?

On that latter point, back when I lived in France in the early 90s, the thing was to wear brown wingtips with un jean. And, the highest standard for that was handmade English wingtips. Yep, Frenchmen in an Englishman’s shoe.

Mountain has continued to refine his shoe product, so let’s take a look at the evolution between the launch version and the current iteration, the fourth. All the photos will have v1.0 to the left, v4.0 to the right. This is all from Mountain himself to fully highlight and explain all the thought and refinements. Amazing. You’ll even learn something about what goes into designing a fine men’s shoe in terms of style, durability, and longevity.

The first thing you probably noticed is the change in the cap to vamp to quarter proportions.

This area in Oxford shoes tends to have a gap between the 2 quarters. It’s usually solved with either stitching or a flap like this. I think this flap would be the more durable out of the 2.

In combination with the longer cap, these sharper lines and angles make the redesign look more masculine.

I think they removed an eyelet for aesthetic reasons when they shortened the quarters. Functionally, having less lacing makes it easier to slip into the shoes with our elastic laces.

I’m not sure if there’s a function to this, but I’ve seen it on other dress shoes and it looks nice.

I think the stitching looks much better, and it also keeps the 3 components of the insole—leather, Poron, and cellulose board—together.

Suede has more friction than smooth leather. This should help prevent the back of the foot from slipping up.

The toe upturn is called toe spring. It’s a useful feature if done right, as it helps you not kick the front of your shoes, especially on dress shoes where there’s extra length in the front. However, it was a bit too much on our versions prior to 4. It’s strange because our last (the plastic mold around which shoes are built) doesn’t have that much toe spring, but the shoes do.

I think the reason why these Mexico-made version 4 shoes have less toe spring has to do with the next point.

With our USA-made shoes, there was a cork filler between the insole and the outsole. Our Mexican shoemaker asked, “Is this really necessary?” and the answer is no. With the cork filler removed, the shoes are lighter, softer, and more flexible right out the box, and I think it’s the reason why there’s less toe spring.

This part tended to bother some people’s ankles. It’s much finer in the redesign and as a result much softer.

As a further measure to spare people’s ankles, I had them strategically lower the topline. Note: It can still be lowered further, and we will in version 5.

Thanks to your feedback to our March newsletter, I redesigned our heel counter. This design is most often seen on wingtips, where extra panels allows for the shoe to showcase more of its intricate detailing. I saw it on an Oxford though, and I said whoa.

The stitching on our shoes got a lot tighter between v2 and v3, as we moved cut-and-sew from Wisconsin to the Dominican.

Between v3 and v4, the individual stitches appear to be the same size. However, the rows of stitching are closer in v4, and what a huge difference that makes in refinement. Everything’s better in Mexico!

Elastic laces turn your lace-up Oxfords into slip-ons! These are the coolest thing! People have asked if I’d make a slip-on shoe and the answer was always no because of longevity concerns. I’ve had slip-on’s before. The elasticized parts get stretched out and the shoe becomes too loose. But with these elastic laces, it’s okay if they get stretched out, because you can just replace them! Hat tip to a customer Jerome for telling me about them!

Our old shoe trees were of a stock shape, made from red aromatic cedar.

When I first visited the shoe tree maker in León, I was concerned about the material and the price. Their most affordable option, pine, was 1.5x what I was paying for shoe trees before. The price for cedar was so high that I don’t even remember it.

So I spent an evening digging through articles and forums about shoe tree material. Red aromatic cedar has one clear advantage over other shoe tree woods, and its in the name: aromatic. They smell great. Cedar repels pests and resists rot very well, often used outdoors with no treatment necessary.

There are claims that cedar is better at managing moisture by absorbing it, but this seems up for debate by people with a stronger grasp on science than myself. After all, luxury shoemakers use varnished woods for their shoe trees, and varnished wood is basically waterproof. It seems that the most important thing is that you use shoe trees, period.

The new shoe trees included with v4 are made from varnished pine. They look great and they should last longer than the untreated cedar ones, which can splinter. The new shoe trees are customized to our shoe shape, so that it fits perfectly. I was really excited when they told me I could provide custom-lasted shoe trees for you. This is typically only available with shoes that are $1,000+.

In the end, all things considered, I decided the higher price was worth it.

I was first introduced to the idea of cushion when Justin @BirthdayShoes reviewed Xero Shoes’ Amuri Cloud. Steven Sashen @Xero Shoes is a true barefoot connoisseur. So when he released a sandal with EVA cushioning, it piqued my interest.

Months later, in August, Andrew @LEMS Shoes gave me a call. He had just read our newsletter introducing our new V3. I had given him a pair of our V2 shoes, and he had some feedback on that, too. One thing he recommended was making things softer underfoot.

If Steven and Andrew are both saying a bit of cushion is the way to go, I had to check it out.

We tend to think of cushioning in the context of thick, marshmallow-like, traditional running shoes. This has a number of issues. First, the heel stack throws off our posture and form. Second, that much foam cuts off proprioceptive feedback and groundfeel. Third, EVA is not very durable, so when that much material gets pounded over and over, it will degrade, change shape, and cause even more posture and form issues (see an example on The Gait Guys here).

However, if you’re using a thin layer, everything changes. First, we’re still zero-drop, and there is no heel stack. Second, soft foam actually allows quite a bit of proprioceptive data to come through. Third, it’s so thin that even if degrades, the relative change is negligible.

For us, using the more expensive high-performance Poron over EVA means that our cushioning will last much longer.

Another benefit that I’ve found is that Poron counteracts the slight slip that is inevitable when you wear smooth socks over a smooth leather footbed. It allows your foot to sink in just the slightest, keeping it in place.

The leather we used in v1 was the softest full-grain cowhide I could find, one that was typically used for comfort shoe brands. Our current leather is still a soft and durable full-grain cowhide, but with a dressier appearance: more structure and a smoother, shinier surface.

So I asked Mountain a couple of additional questions, about resole restoration and also if he had any data on wear, tear, and longevity. Here’s his responses.

OK, I know you want a pair. That’s a given. They aren’t inexpensive, of course, nor should they be. Superior quality costs money and you get what you pay for. I think you’ve seen that a lot of blood, sweat, and tears have gone into this design, production, and continual improvements. The price is very competitive for something like that.

From a personal perspective, I love them on many levels. While I have not yet had an opportunity to go out with the v4s yet—but I will in about 3 weeks, a trip to Seattle (I’m arranging a meetup with various channel peeps via Facebook)—let me give you my simple levels of take on them.

So here’s the special deal Mountain has offered. Go to CaretsCo.Com and when you order and check out, use discount code 1803-FTA for $35 off.