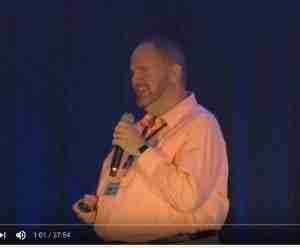 jimmy moore is an evil menace to society, to all that is decent and good.

I believe he should be criminally prosecuted at this point and if successful, stripped of every penny he’s pilfered; and if there was any justice in the world, spend time sitting in a jail cell to think about all the harm he’s foisted upon innocent people.

This goes far beyond well-intentioned mistakes, at this point. It even goes beyond the fact that he’s a morbidly obese dude who’s put on like 100-200 pounds while promoting a weight loss approach via low carbohydrate and ketogenic dieting.

He encourages people to eat unlimited amounts of fat while severely curtailing carbohydrate and even limiting protein—the most satiating macronutrient—such that the diet is 80% fat, and fat has nearly zero vitamins or minerals (see here too, a post from four and a half years ago!). This is not controversial. Isolated fat (like coconut oil, ghee, butter, bacon drippings, etc) is essentially empty calories, just like sugar.

But what I saw today really takes the protein chocolate cake. This is via an Instagram post. It’s about a new potato variety by Potandon, distributed by Green Giant. Here’s a blurb on it.

CarbSmart is a yellow-flesh, yellow-skin potato, available in a 5-pound bag under the Green Giant Fresh brand, Schwartz said.

The product has 55% fewer carbohydrates than rice or pasta

Now, what’s good about that is it affords people who are carb conscious to cash in on the great nutritional profile of potatoes, one that rivals that of red meat. Plus, properly prepared, potatoes are the most highly satiating food item ever tested in controlled conditions. But that’s not all. Properly cooked, cooled, and reheated, potatoes are one of the highest source of resistant starch, a special kind of starch that your digestive enzymes don’t digest, but your gut flora do and is an essential food for them and consequently, important to overall gut health.

What’s not to like about this scenario, generally? Moreover, those low-carbers who want to experiment need only adjust portion size and cooking methods to find their sweet spot and enjoy potatoes again without worry over blood glucose.

So, is jimmy moore honest? No he’s a typical fat-ass, lying fuck, just like he always is. Did you get that? He’s an evil lying fuck and I must say, with zero redeeming value to humanity. He’s a net drain on society. If he dropped dead tomorrow, the world would be a better place for it. Let’s get to it.

A few weeks ago I shared with you about this new product from @GreenGiant I found called #Carbsmartyellow potatoes. There were so many health claims all over the packaging, including the ambiguous “Carbs Well Spent” moniker they had trademarked. To save you the time of figuring out if these are legit #lowcarbenough for a #keto dieter to consume, I tested them today with a few hours left on my Freestyle Libre flash blood glucose monitor.

If you’ve been following me lately, then you’ve seen how stellar my #bloodsugarlevels have been while #fasting and eating #ketogenic. It shouldn’t be a surprise I started with a baseline blood glucose reading of 80.

I sliced up a couple of these Carbsmart potatoes and cooked them in just enough grass-fed butter to coat the skillet and a touch of bone broth, sea salt, and garlic salt. After consuming the meal, the waiting game began…what would happen? Here’s my readings at the one and two hour marks after eating:

So, this Carbsmart potato that is supposed to be so #healthy for me made my BG jump nearly 35 points and then immediately turn right around and crash over 40 points into the low-70s. Newsflash folks, this ain’t a glucose response that’s good for you! I’m feeling the hypoglycemia hard now.

Oh, bullshit. What a miserable lying fucker. So he maybe gets a little tired after a meal of potatoes. Perfectly physiologically normal. “Hypoglycemic” at 72? What a laugh. And what a tender little fat-ass flower.

113 after two whole potatoes? That’s fucking astounding, given that anything up to 140 is perfectly physiologically normal. This is not controversial. Consult any textbook.

By comparison, my usual keto meals barely raise my BG more than 5-10 and I never feel the hunger and spaciness that I have right now. Interestingly, blood ketones fell from 2.0 at baseline to 0.9 at 1 hour, and 0.4 at 2 hour. I’m bumping up my fat precipitously now to help mitigate the swings and get my #ketones back.

Emphasis added to highlight ketotarded stupidity. What a moron.

I’m gonna be blunt with you, Green Giant—this is fraud. You are preying on the most vulnerable people—those desiring to eat healthy and looking for the best food choices—in our society by creating a product you know isn’t what it claims to be. You’re asking for a lawsuit from people with Type 2 #diabetes and the legions of people with #insulinresistance who will see the kind of abnormal glucose response that I did. I’ll recover from this because I’m educated in nutritional health. But what about all those people you sucker into buying your product?

Anyone with half a brain knows who the true fraud is here, Moore, you fucking shyster. “I’m educated in nutritional health.” LOL LOL LOL. Yea, and you sure look like it. What a lying fuck snake-oil salesman.

And look at his stupid fuck, ketotard sycophants in comments (for the most part…some are reasonable).

dodocmom Sad part is that most medical docs would see this as a normal and perfect response to eating- however that peak and drop will have people reaching for snacks all day long ?

livinlowcarbman @dodocmom I was starving and shaky the entire time until BG stabilized.

stefalupogus You are right to say most people, particular those looking for a quick fix, are not savvy (enough) to see through the shady marketing on SO many products. They use the tag line “keto, low carb and gluten free”, but often times, once you view the item online or in real life, it’s not a legit claim. Frustrates me to no end to see so many posts in my local keto support group by members, new to keto, so excited by this or that product they found and then I get to be the asshole who explains why it’s actually a dreadful choice.

fueledby.oilandbutter Jimmy, what about bio-individuality? That is just your response, but others may have a different response. Robb Wolf covers this well in his recent book.

livinlowcarbman @stefalupogus With so many new to keto we must educate them about these tactics. The Atkins bars and products have been a other one like this.

fueledby.oilandbutter Some people have no issue with potatoes, or lentils, etc, while others do. That is why it is good to test and know which carbs you can tolerate and which you cannot.

livinlowcarbman @fueledby.oilandbutter I’m well aware of bio individuality. But this isn’t about that. This is about a food company exploiting people with a health claim that’s invalid.

livinlowcarbman @fueledby.oilandbutter Again, that’s not what this post is about. That’s a separate issue. This is about the marketing.

jessesmom00 Thank you for doing this for us. So many products claim to be good for keto peeps, but aren’t.

laureninboulder But for someone with healthy insulin levels generally this may be a good product right? Just because those who are extra sensitive have issues doesn’t mean everyone would.

livinlowcarbman @laureninboulder True, but that’s not the point of this post. If you can tolerate potatoes then eat a regular one to your heart’s content. But GG is selling one called Carbsmart insinuating it’s s good option for people reducing their carb intake. There’s no caveat about tolerating carbs. The clear marketing manipulation is that if you eat low-carb/keto that this is an acceptable option. It very clearly is not.

muzikgirl1972 @fueledby.oilandbutter jimmy is all for people finding what works for them. But that is not the point of this test he did. He’s trying to inform people of the marketing gimmicks these companies use to try to fool people into eating a product that clearly isn’t really low carb. Sure, if you can handle a potato now and again, go for it, but a lot of people can’t and some are being fooled by these marketing claims. Jimmy is just trying to help educate people about these false claims companies try to use.

All of this “marketing gimmick” twaddle and flapdoodle is a deceptive diversion. In fact, the potatoes—in development and testing for five years—are exactly what they say they are, a relatively lower carb alternative. Far less than standard potatoes, and twice as fewer carbohydrate by calorie than rice or pasta. But, of course, it goes against the low carb and ketotard catechism of starch of any kind, in any amount, being off the table.

In fact, what something like this does in actuality is undercut his message and influence, and ultimately his shyster bottom line. I mean, it’s not like you’re going to be buying potatoes with a livinlowcarbman coupon code. Moreover, what happens if people enjoy potatoes again and in preparing them in a sane manner—not heaping fat all over them—they experience the true satiation potatoes offer? And then, what if they become saner about having a more relaxed, moderate low carb experience and develop a better relationship with food overall?

jimmy moore can’t have that. As a morbidly obese international weight loss guru getting fatter (say that without laughing), there always has to be the next magic “marketing gimmick” for him to pilfer more money from his vast cadre of gluttons and food addicts.

Well, and as for me, in the words of H.L. Mencken, “Every normal man must be tempted, at times, to spit upon his hands, hoist the black flag, and begin slitting throats.”