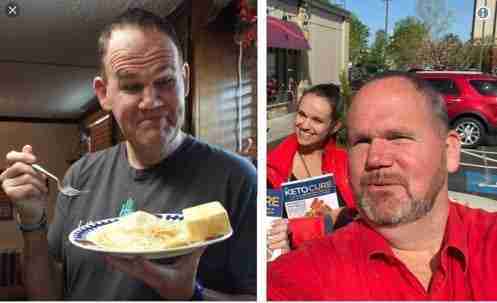 There’s just no way around it. That the lies are so bold-faced, ushered forth with such impunity, with no apparent awareness that it would be easy to expose them in your sleep, makes you have to question their sanity, their intelligence, or both.

The gist: everyone remembers that pic to the left of Jimmy chowing down on five eggs and a half pound of butter (the pic to the right shows the results and “health gains”). There were many others like it, too, as well as much discussion everywhere—easy to find—that chowing down on copious amounts of butter with meals was a regular thing. The other day, Big Fat Loser-Liar jimmy moore and his partner in Big Fat Lies, Christine Moore, came out in league to claim it was all just Big Fat Joke with a butter prop. And it has been exposed everywhere as the biggest and fattest lie ever told, including on Richard Nikoley’s Ketotard Chronicles.

It’s no secret that Carb-Sane / Evelyn Kocur and I have had mutual animosity going back to like 2012. Whatever. I’m not given to grudge holding. Guess that’s not her thing though, as I believe I’m still blocked everywhere I can be. Oh, well, whatever.

But, there’s just no way I’m going to be puerile and not steer everyone to what may be the best and most thorough take-down of anyone ever. She certainly does have a knack for remembering even the most obscure things from way back and digging them up: Jimmy Moore — Big Fat Liar — Steps in it AGAIN! It Was NOT a Joke, He Is!

Ok, I’ll not steal any more of her well-deserved thunder. Go check out that post. I’d add one thing and that is, it’s time to make Christine Moore just as big of a target as Jimmy, now with her bogus “Nutrition Therapy Practitioner” “certification,” a stupid, health-harming podcast, and the demonstrated willingness to bold-faced LIE for Jimmy (and presumably for her own benefit). See how Jimmy likes the wrath towards his stupid wife he’s wrought. No mercy. No quarter.