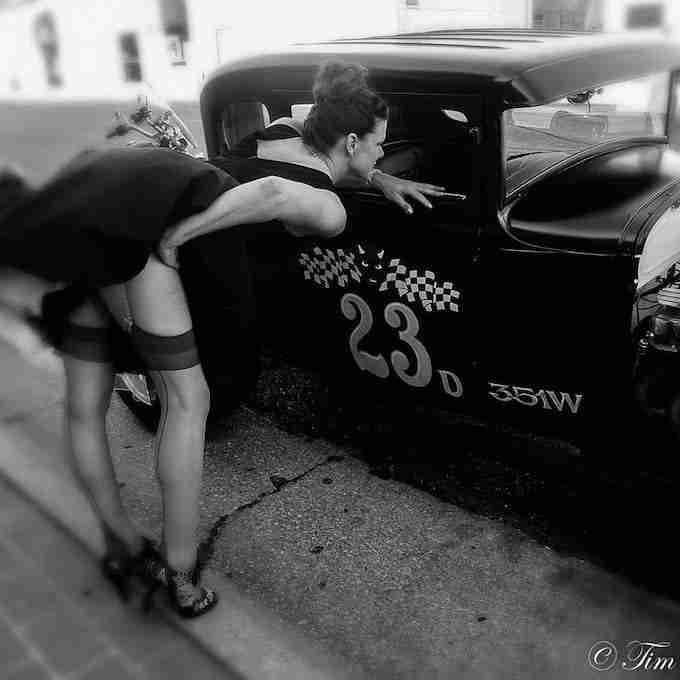 The other day on a private comm channel and just off the top of my head, stream of consciousness, thinking out loud, I quickly wrote:

From experience I think there’s three principle things about the female that apply to most.

1. They are polyamorous. That is, while most will be monogamous, they have the capacity to maintain lightly loving or flirtatious liaisons to keep options open. Strategy.

2. They are a little bit lesbie. They too appreciate the beauty of the female and there is a lowest common denominator element to that. I’d say most females I’ve been with have had some level of sexual same-sex curiosity or experience.

3. They all want to have their cake and eat it too. They are very trade-off averse. They want it all, without having to give up anything.

My long time friend Sue, Hot AF pictured above, had some input about the above and I thought it worthwhile to share with readers. Some of you from way back might remember Sue and her three cave girls I blogged about. We have an update post on that planned soon, the cave girls six years later and man are you not going to believe it (the oldest one is 6′ 2″ tall and stunning).

So here’s Sue replying to me.

From experience I think there’s three principle things about the female that apply to most.

Yep, broad generalizations are really not something in my wheelhouse. I prefer to deal with each human on an individual basis, but I will just leave it at that.

1. They are polyamorous. That is, while most will be monogamous, they have the capacity to maintain lightly loving or flirtatious liaisons to keep options open. Strategy.

Most people I know are ‘poly’ in some form or another. Women may be more inclined to this, but how would I know… most of the time, the women I have observed are more inclined to stick to the side their bread is buttered on and may (or may not) have some orbiters waiting in the wings as a back up plan, BUT the men tend to have some back-up plan as well.

We all do it, perhaps for different reasons, but intellect is a heavy indicator here. Some, male and female, have the presence of mind to consciously keep someone on the hook as a backup plan, but many, especially males, are just exercising some base biological instinct to find the next person to serve as an outlet for physical pleasure.

Some, not many, but some, actually build some emotional/financial/physical long term component into their time-investment back-up person. Most people are just too stupids to have this type of long term goal in mind when selecting those people with whom they are developing a connection.

2. They are a little bit lesbie. They too appreciate the beauty of the female and there is a lowest common denominator element to that. I’d say most females I’ve been with have had some level of sexual same-sex curiosity or experience.

I watched this over and over again, primarily while bartending, but also in general. I am in 100% agreement that this is primarily a female trait. What I have observed and participated in, is that women are not motivated by an appreciation of beauty as a straight up visual stimuli. Except for the young ones, who just think that the whole lipstick-lesbian thing is cool (mainly as an attention-getter aimed at males who are inclined to pay more attention to the girls who are open to this type of thing), more experienced women do this for a totally different reason.

Women – including me – all have a mostly silly inclination towards some romantic connection. A lack of strong male leadership in a committed relationship, or the lack of a relationship with a male at all, will make women prone to forming bonds with others who are of like mind, validate them or feed their egos. Sometimes, that is other women.

As a result, women, and, yes, particularly women, will often seek or accept the intimate company of other women.  Simple curiosity may be a powerful motivator for the less-intellectually-inclined, but with more mature or experienced women, especially women who have some agency and awareness of their own lives – it is simply a matter of forming a bond with any other person and letting physical needs trump more socially acceptable expressions of “love”.

3. They all want to have their cake and eat it too. They are very trade-off averse. They want it all, without having to give up anything.

Here is where I take exception to your assessment… You have characterized me as “trade-off averse”. Nothing could be farther from the truth. I work every day to fight this condition. All Humans Want to Have Their Cake and Eat It Too. I am no exception.

I have a job I despise, yet I recognize that I have to give up respect, autonomy and flexibility in order to have some basic stability in both the short and long term to increase the quality of life for my kids. I am cleaning shit off of walls, and being treated like a throw-away moron by people who couldn’t generate an independent thought to save their own lives, yet, I give up any chance of being respected or valued to provide opportunities for my kids. Yes, it is a trade-off.

I have given up my inclinations to be selfish and seek pleasure, because it would harm my reputation, and subsequently, the ability of my daughters to gain standing in the community.  I have even gone without food when finances weren’t great, in order to provide food for my children. I have swallowed my pride and kept my mouth shut when it was seriously detrimental to my own ego all to be the one an only stable source of knowledge, values, and ethics for my kids and for my friends. These are all trade-offs.

Well, I must say that I knew that Sue was an exception, at least on point 3. 🙂