The Left: Policing Ideas and Prosecuting Thought Crime; A Story

A gun “conversation” with a leftist lesbian couple…

The other night I decided to head out to Sarafina’s Italian Kitchen here in Arnold. It’s the most popular place in town and reservations are almost always essential unless you’re one or two people and want to wait for a seat at the bar, which is what I almost always do.

It’s good food. She learned it from an Italian chef and restaurant owner, married him, then got the restaurant in the divorce. She has done very well. I typically have her customize a pasta dish for me. I go elsewhere for proteins.

This night, there was a beautifully restored ’65 Corvette Stingray in the parking lot and I wondered if I could pick out the owner when I walked in. Easy, and as luck would have it, they were at the bar, as were a lesbian couple (obvious), with a seat in-between them. As same-sex-couples are almost always leftists, and you know what I think of their political views, I know what you’re thinking. And you would be wrong. I often strike up conversations with lefties in social contexts, and always have a good experience and they do too.

I begin by giving them what they want, which is to be recognized for their discriminating tastes. Travel is usually the easiest. Fine food, another. Or, it could be hiking, nature outings, camping even…the list goes on. It’s easy to find something if focussed on giving and not talking only about yourself, and I’m good at speaking intelligently to a whole host of things, being a world traveller and liver abroad for eight years myself. I once knew a lesbian couple who did woodworking together and had done a fine job remodeling their house (which I had done myself…having grown up around construction). Talk power tools, not politics, and you’ll be fine.

But I was interested in the car so when I sat down, I looked over at Ken and his wife, both nicely dressed, late 60s or early 70s.

“You own the Stingray out there, don’t you?” Ken smiles and extends his hand. Then he tells me all about acquiring it and then taking over a year to restore it for about the same money. 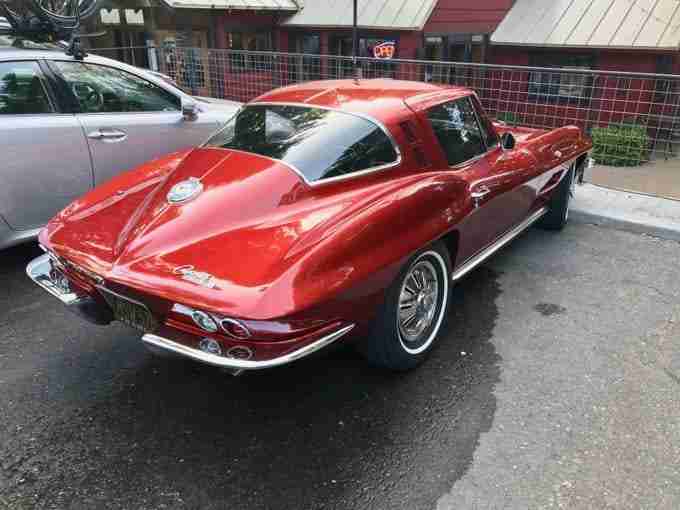 His wife Rey, whom I was sitting closest to, was quite a kick and a character. The kind of older woman who has kept herself in decent shape, was probably quite something when she was young but now, uses frank talking to hold the attention of men. We had already started talking political climate a bit. I could tell they’re of a conservative disposition. Ken has to take a phone call so he goes out on the patio and Rey tells me, “sometimes he wants to just kill everyone.” I reply, “but you like that, and, you like to tame him.” She smiles and we start talking guns, which is when she hits me with her first funny.

“I could make you clear out of here in five seconds.”

“Oh really? We’ll I’m not carrying right now. What are you packing?”

She did it with a straight face, like matter of fact, and wasn’t inebriated. That’s the essential that makes it funny and not vulgar.

Ken returned, then she told me some dick-size innuendo joke, and I returned the favor with one of my own. Then we were talking politics, guns, how many guns, how it could all blow up into civil war.

My question was poignant. Between the gun owners and the gun grabbers, who has the more essential blood lust when things get serious?

…I wasn’t aware that the the party to my left had been listening in until I heard one of them railing to the waitress as she was signing the bill—saying something like how awful it is to hear that sort of thing in public. I ignored it. However, not wanting to have any scene in a place I frequent and know the people there, I whispered to Ken and Rey that they’d been listening and are complaining. We started talking about other restaurants in the area.

But it wasn’t enough for the other party. When the woman to my immediate and ironic left got up to use the restroom, the other partner leans over and taps me on the shoulder.

“Sir; SIR!” I turn around and see her red face, boiling with rage.

“Can you explain to me what is a Libtard Fucktard?”

Without saying a word or making the slightest facial expression, not even an eye roll, I turn and look straight ahead, ignoring her and her question.

“What, are you going to shoot me in the back when I walk out of here?”

And in my best military command voice while still looking straight ahead, I said two words: You’re dismissed. She never said another word and I never turned to see any reaction, or to watch them leave.

All that and more?

And in terms of fear, from where does that come? Fear that the narrative is slipping away? Fear that even some of their own are jumping ship? Fear that advancing their ideas is not only getting increasingly harder and at a more rapid rate, but is losing ground in many ways and areas? Fear that they won’t know what to do when it’s not worth it anymore?

Well, perhaps they can travel and enjoy fine food.