Spring Has Sprung: Time To Tighten Diet and Exercise — My Flexibility Method And Food Pics
What In The Hell Is Up With Richard Nikoley, Chapter 2

It’s in our nature to seek paths of least resistance. It’s not a particularly bad thing. Conserve energy, obtain more for less, and reduce the often greater risks associated with high energy and effort.

It’s not necessarily lazy and can sometimes be smart.

In the realm of diets, however, this human tendency often goes off the rails into magical territory. It’s nothing new, really. The diet industry is huge and to compete within it—whether it be through books, training courses, packaged and processed foods, or whatever—you’re going to need some hook or sizzle that I call magic, in order to compete for the dollars on offer.

The magic typically entails some sort of easy counting…like packaged foods all broken down into point values; or, counting only carbohydrate grams. The latter is the classic Atkins, of course; and admittedly, there is a bit of “magic” underfoot, since it turns out that if you severely restrict carbohydrate, most people tend to replace it with forms of protein. Since protein is the most satiating of the three macronutrients, there is a spontaneous caloric reduction for many, and they enjoy a double whammy effect: they lose a lot of water weight from glycogen depletion initially, and then sustained weight loss from eating fewer calories than energy demands.

Most stall at some point, however. I wrote about this way back in 2012, after Stephan Guyenet got Gary Taube’s knickers in a bunch at AHS11: Synthesis: Low-Carb and Food Reward/Palatability, and Why Calories Count.

Here’s how I explained the stall phenomenon, long quote.

So let’s run some example numbers for shits, giggles…and in hopes of a Second Coming (I didn’t specify what kind).

He goes Low carb. His target is 160 pounds, 90 pounds away…because that’s the last time he remembers where a hot chick approached him and, well….she did nasty things to him. He’s been told he doesn’t need to count calories or anything—that they don’t matter, eat to satiety—under a certain set of proscriptions having to do with carbohydrate per se.

And it’s exactly what he does. After the initial water weight loss and adjustment period, he settles in. Since he doesn’t count calories, let me do so, hypothetically. …Wow, amazing, and this does go to the asset side of the Balance Sheet. He’s not doing anything like 3,500 calories per day. Not even close. Eating ad libitum, he’s naturally consuming about 2,800 calories for a 700 calorie deficit per day, or about a pound lost per 5 days. He feels awesome, great…because even though in big caloric deficit, he’s still on a very high fat diet and he’s not really hungry too often. He’s euphoric. The pounds are melting off. He’s an LC believer for life. It borders on Enlightenment. It’s tantamount to a religious experience or, a Second Coming.

This goes on for just short of a year, about 350 days if my math is correct. He’s livin’ it up, low-carb style. He’s doing himself, friends, and family a huge favor. Don’t discount that. But in the end, he’s accountable mostly to himself, and in that end, he stalls. He stalls, not at his 160 pound goal where hot chicks might once again do nasty things to him, but at 180 pounds, 20 pounds away. He’s gonna have to do something, or settle for 2nd string in the chick department. How can this be? Low carb is magic. He’s proved it. Over the space of an entire year!

…Or so he thinks.

What he only proved, however, is that calories count. Yea, he may have gorged on the fatty meat one night to the tune of pounds and huge calories and couldn’t wait to tell you. But like my dear late grandmother—while I was growing up in Reno—only ever told us about her jackpots at the slots, and never the amount she fed it regularly…what he didn’t tell you is that the next day, he didn’t eat much at all. He was satiated. It all subtracts down, over time.

As it tuns out, 2,800 average daily calories is about the requirement for a 50 year old guy, 180 pounds, 5′ 10″, who gets off his ass now and then. …Unfortunately, fantasizing about the hot chicks in waiting doesn’t burn a whole lot.

Are you beginning to see where I’m going? Low carb was indeed effective. But it was only a means to the end that really worked. Actually, two means: his food palatability/reward was diminished, he spontaneously lowered caloric intake to an ad libitum level of a 180 pound man (2,800 calories), and he lost the weight. A year later, right on schedule, he weighs 180. After months and months or years and years, he begins to become disillusioned about low carb. But the blindspot, because “calories don’t count on low carb,” is that he never tried 2,600 calories daily on average, the requirement for a 160lb man with his parameters. But, had he done that, he’d have been hungry and low carb is a lot about not having to feel hungry. It’s baked into the low carb—and hopefully gluten free—cake. So low carb failed him?

Now let’s get into new information. The advent of both activity trackers like Fitbit and food logging aps like LoseIt! and MyFitnessPal (that can also integrate your tacker activity, your workouts, and even your WiFi scale) are making it not only easy, but a bit of fun to track stuff. They can even scan food bar codes, so errors are being reduced. AI may bring the ability to snap a picture of food and get a reasonable estimate of the total breakdown.

The keto diet as it’s being popularly touted is doomed to failure on two primary counts.

And that kills the magic and we’ve come full circle.

What if we could access and analyze all of this self reported data and see who’s doing best? Turns out you can. Turns out engineer Marty Kendall is doing just that. He has a blog, and two Facebook lives, here and here.

What he did is take about a half million days of diet data from users of MyFitnessPal, categorized them by the macronutrient breakdown they were reporting, and then see how they do in terms of success in meeting their targets for consistently coming in at goal and meeting weight loss goals. 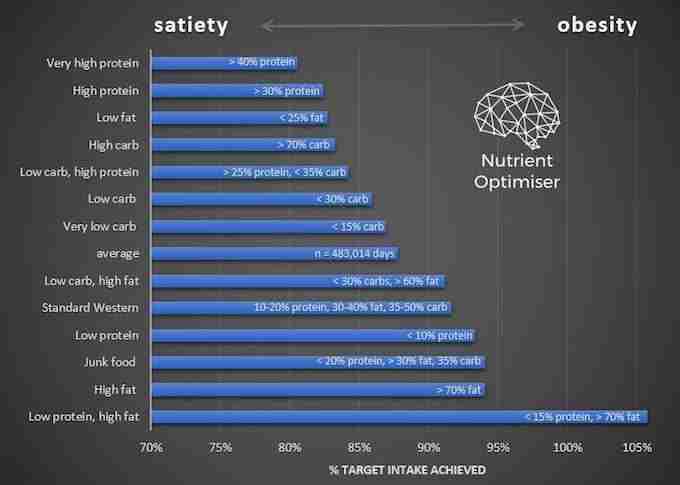 Amazing. Per the data covering a half million days, the Keto dieters are just doing the absolute abysmally the worst. It is a disaster. 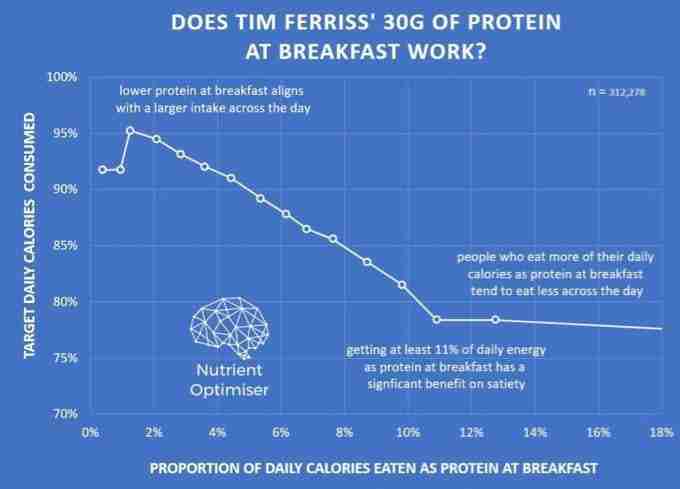 What this chart actually means is that IF you get about >10% of your whole daily calories from protein composition early in the day, you’re going to tend to eat less over the whole day, naturally. So, it’s not so much the old adage that breakfast is the most important meal but, that you make it rich in protein.

Marty is using exactly the same data, just a different way of query. The bottom line is, the more protein you eat at breakfast, up to about 11% of total calories on the day, the proverbial path of least resistance, you’ll be coming in at a good caloric deficit for the day if you’re aiming to lose weight.

It turns out that my morning “meal” most days is pretty dam close, since I began the spring cleaning: Spring Has Sprung: Time To Tighten Diet and Exercise — My Flexibility Method And Food Pics. Here’s the basic deal most days, like an average of five days of the week. 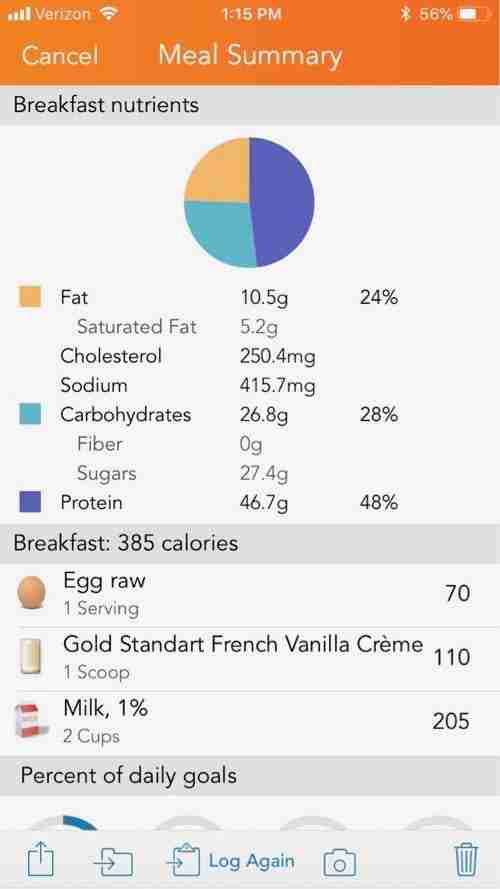 The shake is made from 1 cup of the 1% milk, and I just drink the other cup. Please, not one single comment about raw eggs in a shake or smoothie. I’ve been eating raw eggs for over 50 years and have never had a single problem ever. Shut. The. Fuck. Up. I seem to always get comments from tender flowers and special snowflakes every time I mention this. I don’t care about your outlier problems and won’t entertain them.

Go and do likewise. Like this, grilled flank steak last night. 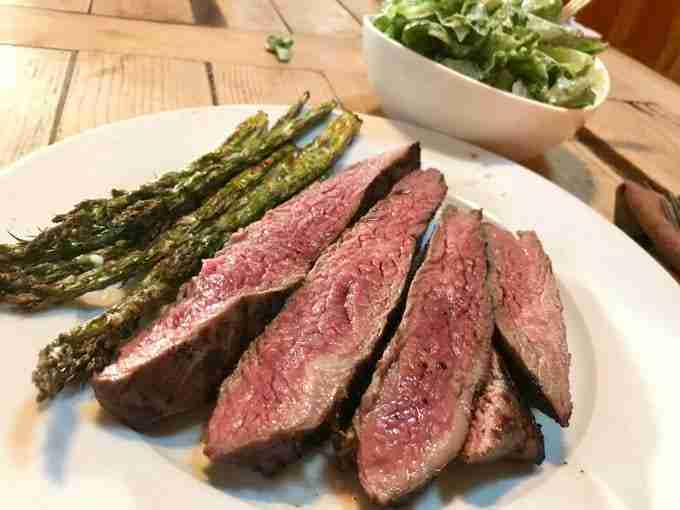