That was three weeks into the separation from my wife Beatrice, whom I’d been together with since about 1996, married since 2001, so 22 years and 17 years, respectively. I’d suspected for a while that her retirement last June from the day job would make or break us. It did the later. It’s very different, living with someone 24/7/365 than it is just every evening, weekend, and vacation. It’s nobody’s fault. When you have all the time in your life, you go to your primary and principle values. It turns out that ours diverge too much to be in each other’s faces, all the time.

After just over five months of solitude on my part, living alone in a pretty big space, I headed down to SoCal a week ago, and spent the most part of that week at Bea’s new place she’s crafted for herself, and decorated throughout with the many classic, artful things I collected during my five years all over Asia in the late 80’s, that she loves, and that I love even more that she appreciates them so much. I’m so happy for her to have them now. They don’t work so well in a pinewood cabin anyway.

The purpose of the visit was both to reconnect a bit, and to meet with a divorce mediator. This is someone who, rather than seeking to fuel flames of discontent in exchange for attorney fees on both sides, tells you both you’re full of shit while you’re sitting there. We met with Belinda—former divorce attorney—last Tuesday and to give you an idea, I came out of the 2-hr initial mediation feeling like crap, that she had totally taken Bea’s side against me. I was sanguine about it, though. I told Bea as we were driving away that Belinda’s $5,000 flat fee just saved us $10,000 in attorney fees, each.

But, Bea wasn’t happy either and as women seem to do, she got anxious and perturbed later that evening. Apparently, she thought the session went opposite from my impression. I’m just going to suppose that’s good. 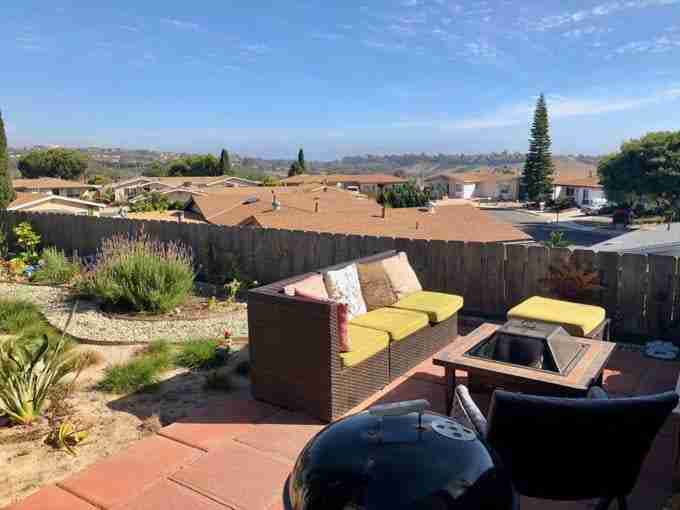 I’m not going to say where she got it from, but Beatrice has an excellent flair for the decorous, now. On the other hand, I grew up with an artist grandfather and at least one of his brothers had an interior decorating studio…

Live above the fray. Decorate well.

What I really learned over the last week with that view is that Beatrice is so happy and content with what she has done for herself, but that just as equally, it’s not me. We’d be at each other’s throats within a couple of weeks. It’s not at all about how cool she picked a place to live or how she decorated it, but the context of life. I’m ready to move and move often, with only what I need. She’s five minutes away from the family she loves. How could I begrudge that? How can I not applaud? She worked for 35 years for a bargain where she gets enough money monthly to do what the fuck she wants every single day she wakes up for the rest of her life, no worries. Not a bad bargain and It’s indescribable, not the least of which is because for half of those 35 years, I saw her getting up at 5am day in, day out, enthusiastic to go at it another day with the school kids she owned. She was no shit-ass, union-entitled teacher, either. She loved it and lived it. She owned it.

I make it a point to apprehend ways the female is essential, respectable, and worthy of exaltation. Exaltation, for my personal perspective, took growing up with a great grandmother who raised a boy and girl (my grandmother) as a single mom during the Great Depression. I can’t imagine a Western male not having their own reasons why women are so great and so essential—even on Father’s Day.

I have never been much enamored of the “men’s” movement. Call it Red Pill, call it whatever. To me, there were always two nagging things:

A few months back I came across a woman who, in 5 words, reconciled my problems with the male movement and after thinking about it, gave me a clear path forward in all of it.

Men need to wake up.

It actually seems very obvious, once you think about it and I did think about it lots and lots. If you do, then you immediately dismiss these nefarious notions of males as victims or of female spokeswomen for poor males.

…Back when I published Part 1 of What In The Hell Is Up, I got tons of feedback, much of which is public on the comments to that post and the Facebook share comments. What nobody knows is that I got several dozen feedback emails and comments to the blog that were held in moderation because the commenters had no previously approved comments.

These where highly berating, mocking, gloating, etc. I have a simple rule about putting through first time commenters on the blog, and from where, going forward, they are whitelisted and comments publish automatically: It has to be value-add the first time.

It’s so simple. And yet, trolls, gloaters, and mockers can’t manage that. They can’t help themselves.

There’s an interesting fact about all of it: 100% male; or, at least, anon using a male pseudo. 100%, zero exception. No females. I got nothing…NOTHING but hugs, from females. Does this not go to my interlocutor’s pith, above? Think about it.

…Feminism is an easy target but it’s the wrong target. The right target is solidly, 100%, pussy boy males with pink panties in a bunch.

Feminism simply fills the void left by all the hundreds of millions of males who have decided they want to be girls now; but of course, aren’t man enough to chop off their cocks and “man” up.

This in not a formal post in this vein, but is somewhat peripheral to my Propertarianism Project.