Everything Update. But Mostly Gut Microbiome and Resistant Starch

I really need to spend way more time getting the book ready for the publisher, in my eyes (now editing chapter 6 of 15, and accelerating); which means, excruciating editing at word, sentence, paragraph, section, “science sidebar,” and chapter levels. Convey the ideas in the fewest words possible. That’s the creed I go by. I truly do believe its going to be amazing; and if not, I fail. Tim and Grace both knock my socks off. Makes it easy foundationally; but so hard, too, because I want those ideas and wealths of information to shine in a very particular narrative, and it’s nothing like writing this blog here.

A word of thanks and deep appreciation for your continued support. The Amazon deal (see all the links and banners all over) is going so very well. Every day, many of you are hitting the link, or just clicking on a banner, and doing your shopping. Here’s how it works:

Simple and elegant. A company most people love and trust, and you don’t even have to buy what I’m peddling. You can buy anything you want (I see TVs, cameras, stereos, kitchen appliances, etc., in the reports). One time, a gal must have been outfitting a sports bar, so I got a piece of an order for 12 flat screen TVs. 2,500 units of various things ordered in March, 3,600 over the last 6 weeks.

That said, the only things I will ever peddle myself are things I use myself and find value in. The hottest thing now is the soil-based probiotics. Since I first did the post on them in late February, about 1,500 units out the door in total, for the three of them. One Tweeter tweeted me just this morning:

@rnikoley Thought dreams were good on RS alone. Popped my first Prescript-Assist yesterday and holy shit. One after another w/ movie

Turns out to have been something about Keith Richards in Todd’s living room, discussing blues musicians. What will your dreams hold?

Thank you very much. You motivate me to do better. Oh, BTW: Go get your soil-based probiotics if you like.

…OK, here’s my cool stuff for you, before I turn to preparations for recording Jimmy Moore’s The Livin’ La Vida Low Carb Show late this afternoon as guest host. If everything goes according to Skype testing, I’ll be recording the show from San Jose, CA, on the line with Dr. Grace in Shanghai, Tatertot Tim in North Pole, AK; and to close things out, Tom Naughton from his farm in Tennessee. It’ll be about the gut microbiome and resistant starch, but with an emphasis on how low carbers can benefit without sin. 🙂

~ Speaking of Tom Naughton, did you know that Tim, Grace and I collaborated on an extensive interview with Tom about resistant starch? In total, it comes out to almost 11,500 words, and here’s Part 1 that Tom has published, with a really great mix of intelligent comments so far. Oh, I see that just this morning, Part 2 is up, and I haven’t even read it myself, yet. I hope you enjoy what we tried to do in answering questions in different styles—something for everyone. You can guess which style I took up.

~ Speaking of Tatertot Tim—more popular on my own blog than I—he did a podcast with Ameer Rosic. My own podcast with Ameer a while back is at nearly 5,000 listens and Ameer asked me for a Part 2. I suggested that he go with Tim (and I’m going to suggest that he delve deep into science, medicine, pharmacology and clinical practical experience with Dr. Grace, as his part 3).

~ If you have paid any attention to me in the past, you may know that I have a serious crush on Terry Gross, whom I consider to be the very best all-around interviewer of our time. Most recently, she has interviewed Dr. Martin Blaser.

There are lots of theories about why food allergies, asthma, celiac disease and intestinal disorders like Crohn’s disease have been on the rise. Dr. Martin Blaser speculates that it may be connected to the overuse of antibiotics, which has resulted in killing off strains of bacteria that typically live in the gut.

Blaser is an expert on the human microbiome, which is the collection of bacteria, viruses, fungi and other microbes that live in and on the body. In fact, up to 90 percent of all the cells in the human body aren’t human at all — they’re micro-organisms.

Blaser is the director of NYU’s Human microbiome Program and a former chairman of medicine there. His new book is called Missing Microbes.

Not to toot Grace’s, Tim’s, and my horn, but virtually all of it has been in our book for months, under editing, revision, and inclusion of the latest science. No surprises. But, you will for sure want to read our unique perspectives when it comes out. Our perspective of the whole thing is quite a bit different, fundamentally.

~ On the allergy issue, there’s this: Pollen is Not the Problem.

When the gut is out of balance, opportunistic and pathogenic microbes overgrow and take over dominance. These pathogens produce toxic substances which are the by-products of their metabolism. Some of these toxins actually play an important role in the body when the pathogens in the gut are controlled and kept in check by good flora. But, when the good flora is absent or not playing a dominant role, these pathogens can overproduce these toxins.

One such toxin produced by several types of gut pathogens (Proteus, E. coli, Staphylococci and others) is histamine which is actually an important neurotransmitter in the body.

When these microbes grow unchecked in the gut due to a lack of beneficial flora, they overproduce histamine causing many functions in the body that react to histamine to go haywire as excessive amounts pour into the blood.

Is Benadryl your best friend? If so, you know you potentially suffer from an overgrowth of pathogens in your gut that are overproducing histamine!

I don’t care for exclamation marks in that context, but for me it has been over the top amazing: sneezing, wheezing and dripping since I was 13. It happened within 3 days of eating the dirt. I breath clearly through my nose, for the first time in life memory. Thanks, Grace.

~ There’s a study out about the first looking into of the Hadza gut microbiome (full text). There’s a couple of articles written about it, here and here. A graphic from the latter link in Wired. 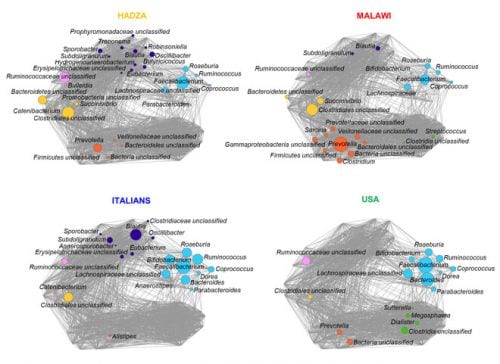 But let’s just take the existing data for what it is, for now. I’m an Occam’s Razor kinda guy, and given that that Hadza exibit none of our Western maladies, their guts just rock and yours are pathetic. Fair?

What I think is that ultimately, while these sorts of studies are surely going to provide very valuable insight, they’re ultimately only going to serve as practice and foundation for the testing to come:

There is no “healthiest gut biome” in the world. There is potentially healthiest in an environment, and beyond that, healthiest in a socio-environment. Then, we’ll be getting somewhere and the discoveries are going to be so fucking gobsmacking I can’t even believe it.

…And, just as Dr. Grace has admonished us so many times, once they adjust all the above data to various levels of antibiotic use, the picture is going to be just as she said. The unhealthy in the same socio-enviro will have had high antibiotic use and they healthy, relatively less.