I was mightily inspired upon waking Saturday morning. I’m going to do me some back ribs. This was a super fun undertaking and I’ve got a lot of photos for you. And remember, click on the images for the high resolution versions.

First thing I did was head over to get some ribs (Costco, $30). Then it was over to a BBQ Galore outlet to inquire about various dry rubs. Yep, spicy, not sweet. Then The Salt Lick is the only option, I was told.

So first step was to dry rub the ribs, both sides. I was pleased to see that the membrane on the back had already been removed. That’s a lotta ribs. 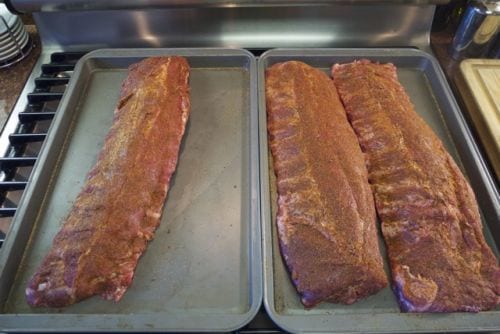 I let them sit for a good 30 minutes while I preheated the oven to 200F. Yep: low & slow. I then wrapped them individually in foil, set them back on the “cookie” sheets (their most superior use, nowadays) and tossed ’em in the oven for a four hour soak.

During that time I searched for paleo BBQ sauces and the Google Gods took me to Son of Grok’s BBQ sauce. The recipe is all at that link. It’s fun & easy to make. What I did differently was to use my Magic Bullet to puree the onion and garlic with 1/2 cup of the beef stock. At the end I did think it needed some slight touch of sweet, so I added first 1 tbsp molasses, then another. 32g of sugar for a 3-cup rendering. in most commercial sauces you have 16g of sugar for 2 tbsps. At 1/4 cup of my concoction, you’ll only get 2-3g of sugar. Acceptable, in my book. 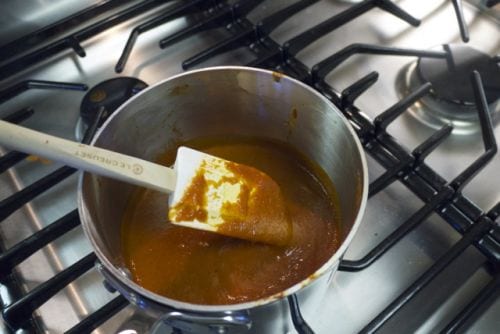 At 3:45 I kicked it up to 250F and then shut off the oven at the four hour mark, and without opening the door, let them rest for an additional 30 minutes while I fired up the grill. 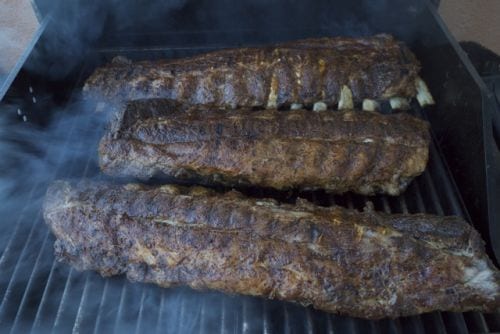 The grill was on low. I also saved the drippings from the foil wraps and using a brush I basted, turned, covered, based, turned, covered…letting them go about 5 minutes per side, about 3 cycles or so. For the final step I kicked it on hi, basted the tops heavily and browned them as you see. 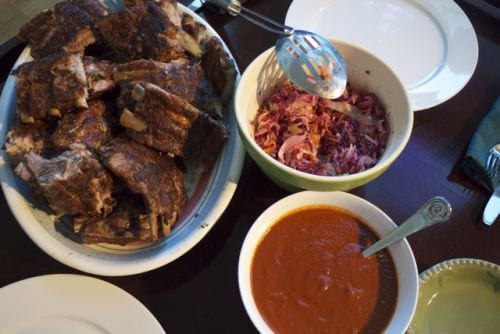 And now for the meal. The slaw was courtesy of our loft neighbors, Robert & Julie. It’s an asian, ginger sort of affair; very little sugar as well (she said less than 1/4 of what the recipe called for). Update: see the comments for the slaw recipe Robert has now posted. 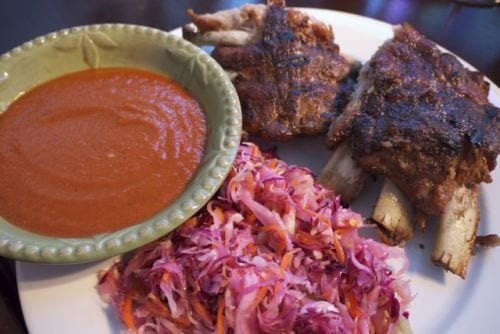 Finally, they were perfect in the sense that they don’t fall apart so you can actually finish them on the grill, but yet you can suck the meat right off the bone. No teeth required. 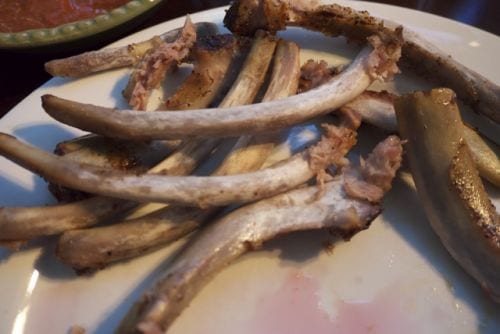 As far as I’m concerned, the Salt Lick dry rub is by far and away the very best I have ever used. I see no reason to ever use anything else. I love it when life gets really simple like that.