It was sometime in April of this year that I had an email exchange with Martin Berkhan of Leangains, private nutrition consultant and trainer. He’d emailed about some utter bullshit like I deal with here every day that’s not even worth mentioning.

We got to talking; he complimented me on my progress, I said I had 15-20 pounds more to go and without being the slightest bit pushy, offered that he could help me. Once we delved into what it was I was doing — that for more than a year at that point had not gotten me materially closer to my goal — he determined I was fucking around too much in the gym, doing high rep nonsense workouts that were a bad mix of conditioning & strength which, he tells me, he sees all too often in the paleo community. So, he thought I had lots of improvements to make here, with a no BS strength training routine. …Which turned out to be true — my training was fucking retarded…recalling, now, those silly-assed 3 x 10 x 135 lbs. deadlifts. Jesus.

But then was the issue of how to deal with it on the blog. As you’ll find out in a subsequent entry about “Working with Martin Berkhan,” he has a certain style. Without giving that away just yet, suffice to say that “we” decided to keep it a secret until at or near the end. And we’re nearing the end.

By now many of you thousands of readers are asking yourselves: who the hell is Martin Berkhan? Understandable — and I’m glad you asked — since so many of you are focussed on the paleo lifestyle, more Crossfit styled workouts and for probably most of you, not obsessed about getting ripped.

Well, you know how I like to use pictures, so click on this for the larger version and no, I’m not telling you which is before & after. 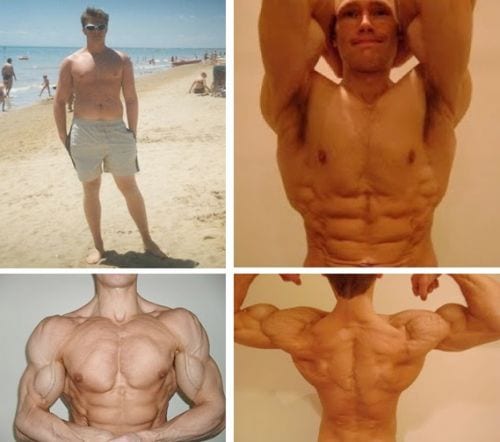 You can learn all you like about Martin’s very long path from fat teenager to near anorexic male model to the absolutely ripped and shredded guy you see above who dead lifts 600 pounds + and does chin ups with a weight belt sporting 100 pounds +. Right here, six posts.

This is going to be a multi-part series culminating in an interview with Martin. As such, I’m going to keep each entry relatively short and we’ll go for as long as it takes. I really want this to sink in, because I think Martin is at the very top of his game right now and is finally getting the recognition he deserves. And I know those of you paying attention in these areas are well aware of that. In short, Martin is in many ways turning lots of bodybuilding bullshit on its head. Finally.

As a bit of of a preview, Martin is positive towards paleo and many of his clients are from the Paleo community, and intermittent fasting (IF) also plays a very core, crucial role in the success he gets. Of course, fasting is also quite paleo.

And for a final preview, here’s a video of me just today, doing dead lifts. That’s 305 pounds for 4 reps and then a second set of 275 pounds for another 4 reps. I turn 50 in January. six months ago I was doing something like 155 pounds, feeling satisfied. I was full of shit.

So, there it is. The next post will detail how I lost nearly 10 pounds while gaining over 50% on my dead lift, among other Lean-ing-Gains.

The takeaway is this: Lean Gains. You can gain strength — like you can’t even imagine — and lean out at the same time.

This is real, and it turns the body building world on it’s head.