Do You Get Pissed Off Every Day?

I was looking at my stats this morning and figrin’: it was probably time to put up a fresh post. That’s how it works, chez moi.

But what? Do I find something that everyone is sure to agree with, like any of the latest and regular nonsense inspired by the health experts in the media? Or, do I go with the “uncomfort zone,” and blog about something that pits some of my readers against others in comments because, that’s always a fun ride? I put the question out on Twitter and got back resounding admonition to to go with uncomfort. OK, so I will, but as a bone to those who desire nothing but harmony, I have devised a plan to include you too. And so here goes. This is basically a link roundup and commentary of my morning, since I awoke and reached for my iPad.

~ + This is just a cool personal anecdote, but I got an email yesterday from the head of the Swedish National Team for ski-orienteering, which as I gather, is a race to goal on XC skis using only a map and compass. A portion of the World Cup for this event will be held in Bear Valley, just a few minutes up the road from our vacation place. So with eight competitors, with three pairs of skis each that need waxing and other maintenance, they’ve rented my place during the last week in January. I feel honored and cooled about that. So there you go. Group hug, ‘cuase it’s so sweet. Seriously. Sweet.

~  +/- Sorry all you OWallS “occupiers,” but this made me laugh my ass off at your propensity to pull your pants down for the world to see…and…nothing to show for it. Thanks to Fouzhan for the inspiration. 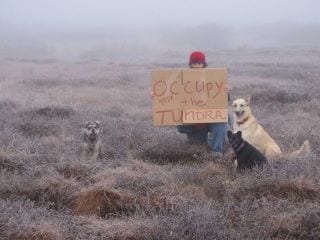 You know, this is nothing in the world like real civil disobedience and you know what else?; neither were the 60s, in general (with a couple of exceptions like Kent State and so forth). It must be simply noted that there is an element of petulance among those privileged — most often those perhaps smart enough to have made their own way, but by accident of birth, had their way made from the start — and they’re either resentful, or feel guilty. My message to them would be to study, in this order: Henry David Thoreau, Gandhi, and Martin Luther King. The latter two literally changed the world. How? Go back to Thoreau.

Otherwise, you’re just a bunch of pussies who will be soon forgotten. In this collectivized society, I do not begrudge your intention nor desire to effect change. But I laugh my ass off at your methods and most particularly so, that you delude yourselves into thinking you’re having an impact. You are most certainly not. Laf.

How many of you are sitting in a prison cell — on charges more important than…no real charges — maybe at least long enough to write: Letter from Birmingham Jail?

Get serious, or just go back to whatever you were doing and stop being an irritant. Or, how many of you have lost a half million in the market in the space of two weeks, as I did, and didn’t complain about it?

Update: Two videos, the first is 2 minutes and sets up the second, which is 6 minutes and Pure Gold.

I can’t find a way to embed the first, so here’s the link. It’s about a #OWS protester who wants someone to “throw him a bone” and pay his college tuition.

Now, the punchline. An actually very polite discussion about the Morons of the #OWS.

~ + Soup for Sluts. Wait for the tagline. 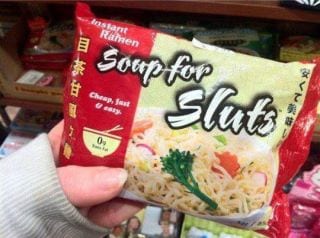 “Cheap, Fast and Easy.” I’m typically nostalgic over my college days, but we had only “Top Ramen.” Simply no comparison.

Yea? Fuck doctors. This merely demonstrates what fucking expensive failures they are in general, the few exceptions excluded. What, half-million a year they make and they’re followers, FOLLOWERS? …To make sure the path is safe?

Just…Fuck Doctors. Like we even needed them at all? And that’s all. Well, you might break a bone or otherwise need a body mechanic. There’s that.

Oh, and you who were so enamored of this, Tweeting it with righteous abandon. Why? Ask yourself why. What, you need confirmation from the very people you’ve been speaking out against all this time?

Do you have pathetic in your closset?

Richard, I have to take offense at your off-handed comments about the CBS news piece. You know full well that the “doctors” who are “warming” to the “caveman diet” are ones that are in our court already and who were, in fact, at attendance at the AHS. Dr. Kim Mulvilhill (the only press at the AHS) has done the best job she can in wording the series carefully so that the sheepple will assume that it’s THEIR doctor who is on board. This legitimizes the lifestyle for them and makes it more acceptable. In fact, we couldn’t have hoped for better press from the mainstream media. WE don’t need the acceptance for ourselves (we know we’re on the right path already and most of us already shun doctors), we need the masses to believe. So far any press we’ve received has been fairly negative and we have been touted as “barefoot, meat-eatin’ freaks.” The first positive mainstream press the Ancestral Health Movement has received needs to be embraced by our circles. Isn’t it our collective goal to spread this message to the masses? Isn’t that part of the reason why you write this blog? Just sayin’.

Actually, I was not aware of who these docs were, and the way the reportage hit me was that these were docs originally opposed, now warming to the idea, and not that they were longtime advocates. Obviously that does make a difference in terms of the way I blasted.

~ + for thinkers and minus for those who insecurely force feed their kids Bible Bullshit.

I only wish I had had such a wondrous opportunity at 8 years old. It’s not really the fault of my parents; they always did the best they knew; but when you know better, then do better, and this is better. 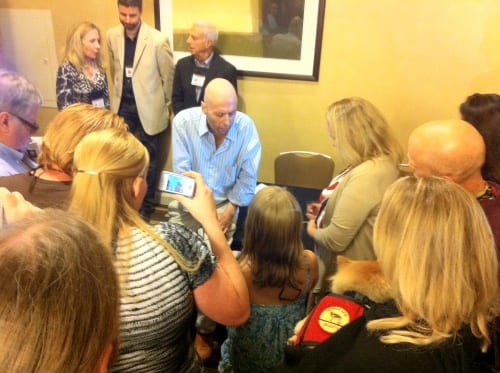 That’s one of my favorite people in the whole wide world: Christopher Hitchens, likely living his last few days, weeks, months, and takes special and focussed time out to sit eye to eye with an eight year old free-thingking girl, who asked him what’s good to read.

Try to get past this story without shedding a tear or two: Mason Crumpacker and the Hitchens reading list.

I do love a story like that, and it’s not only because it makes me remember how ridiculously ignorant was the spectacle of my my youth, where people authoritatively strutted around with marked up Bibles — the more marked up, the more pious — as if they had a fucking clue (they did not). Read the Blble, as I have. But read other literature as well, and if for no other reason, that you may become as unimpressed with the Bible as I have.

If you take the time to explore any of the links in this particular diatribe, make it this one. It’s a touching story in how it transpired, and the way in which Hitch dealt with it — as if he’s taking every last opportunity to reach a mind. The event, including Dawkins’ wonderful introduction, is on YouTube. I would appreciate if those links got dropped in comments.

~ Juxaposition. Mr. Save a Pretzel for the Gas Jets. Actually, the link to this prayer was contained within the text of that last and wonderful story; I suppose, kind of as a foreboding. Bow your heads in helpless, pathetic shame and look to your Your Ruler (in the sky). Take a look. This is the best we can do folks?

The pathetic element, including ruler cheerleading, is off the scale in the context of any wild human animal. That’s what it’s about for me. Forget the moron. Forget the ignorant, and forget the you-can’t-fix-stupid. How about the bend-over pathetic? You call yourselves men? Well, I have to doubt it. No wonder you have to beat your wives into submission figuratively through intimidation, social machination or when all else fails: literally, with fists. Having lived the breath and depth of this thing called fundamentalism, as a kid, from the inside and the outside for decades, but observing: I have to conclude that’s it’s nothing more than pussy control. Everything is geared towards keeping their women submissive and in check. It begins by keeping them ignorant and stupid. Then it continues.

I was fortunate to have experiences with self-confident women early enough, so that I never had the urge to be a fraud.

But you know, I sat through hundreds of similar prayers as a kid, from about 10 years of age to when I went my own way at 18. And I must say that when I wasn’t just simply bored to death…like at the Wednesday night “prayer service,” where everyone would try to outdo everyone else with the longest, most outlandish, choreographed prayer…I suppose I was occasionally enamored of the off the cuff artistry of the thing, in a poetic sense.

But then I read some real  literature. …Then I ventured out and spoke in front of people off the cuff. …Then I began to write, think, and edit. …And then I also began to learn that people see you not as your are, but in some way that implies a responsibility on your part to keep things real. Actually, you don’t even have to be willfully fraudulent; people are just that gullible and dumb. Still. Actually, most people want to be fooled. No, not even: they will struggle and fight to be fooled. They will get very angry with you if you crackle their silly fantasy, and it’s that way with most, as this prayer in actual public, from someone running for PRESIDENT, demonstrates. Reality and the fear that comes with it are that hard to deal with, I guess.

Domesticated Human Zoo Animals are generally pathetic. What other conclusion can I reach?

And I realized, in the end, it was all basically dummies who don’t think for themselves, live in fear, look for someone to tell them what to do, are enamored of things they either can’t do or are afraid to do — like writing and public speaking — and you have your perfect storm of Idiocracy.

I’d had an inkling to transcribe Rick Perry’s prayer and deconstruct it. It’s simply too painful to do. I have a hard time with even realizing that I have family members who are this ignorant, fearful, and submissive: and that it’s a huge lot of them. Where did I even come from?

On the bright side, something that makes you laugh and cry, all that the same time…?