Gut Bugs, Probiotics, Prebiotics…And how our microbes make us who we are 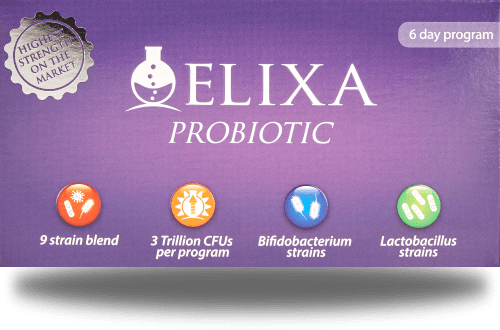 Coincidentally, I finally watched Rob Knight’s TED talk—that had been in my to-do queue for over two months—on the same day Mark Sisson came out with his reformulated Primal Flora. Mark explains.

The funny thing about science is that it’s a moving target. It’s evolving, and if the science evolves, so too must the supplements based on its findings. To stay abreast of it all, I’m always researching and listening to advisors and other experts to make sure that my formulations are optimal. gut health as a health topic has exploded in recent years, as has the amount of research being done, and what we know about how the foods we eat, behaviors we do, and supplements we take affect our guts has evolved. I recently updated the Primal Flora formulation to reflect the latest developments. It now contains an (almost) entirely new set of probiotic strains. Below I’ll explain what these are, how you can benefit, and share my own experience using the new formulation.

That much is good enough, but it gets better.

…I need to explain a few concepts. You are probably aware that most common probiotics and fermented milk products contain primarily lactobacillus and bifidobacterium species. The reason I elected not to focus on those is because these species are already very prevalent in our guts – there are probably over 20 trillion – so adding even 20 billion more CFU (colony forming unit) is only boosting the population by one one-thousandth. And that’s if they even survive the harsh acidic environment of the stomach (which most probiotics don’t). Instead, what I wanted was a number of well-researched species that I could deliver to the GI tract where they could colonize and do their unique jobs. To do this, most had to be what we call “spore formers” that remain dormant until they reach the appropriate parts of the gut, undamaged by stomach acid. These needed to be the species and strains that were proven effective in years of solid research, in many cases signaling to other bacteria to increase or decrease.

Cool, now we get to wait for the Usual Suspects; the Nattering Nabobs of Negativism to come out of the woodwork over the “dangers” of HSOs (homeostatic soil organisms) or “spore formers.” It’s like they never got the memo that all kids eat dirt if you give them a chance (and this is where you’ll find the bacterial spores in big numbers). …Anyway, I just wish Spiro Agnew hadn’t also coined the trite America, Love It Or Leave It bromide, like he owned the place…

So, now watch the video. It’s a fabulous introduction to the gut biome, absolutely essential in dismissing and then ignoring stupid, presumptuous, pretentious people who have yet to catch on but who will instead act like they always knew, and came up with the idea years ago.

I’ve been using using probiotics for a while now, since I first got the notion that perhaps they were at the root of a lot of problems, including obesity and over-plumpness: Probiotics: The Genetic Component of Obesity. I didn’t know what the magic was, only that I suspected it was there. It goes way back to when I first began using PGP (pretty good paleo), fasting, and heavy lifting to lose an initial 60 pounds: Hunger. That’s from 2009, so perhaps it demonstrates that I was always unsatisfied with “easy” macronutrient solutions (low or high carb; high or low fat; high or low protein, etc.) or “easy” nutritional solutions (high, low, or no grains; high, low, or no starch; high, low, or no animal foods; or high, low, or no vegetable foods).

Remember, this is Free the Animal and from day one, the theme is that we derive our principles by observing wild animals. Biochemistry is cool & all but no amount of understanding or Krebs Cycle remix is going to fix human problems.

Humans need to fix themselves and approaching the wild is an approach that has billions of years worth of earth-laboratory testing behind it. To state it another way: extraordinary claims demand extraordinary evidence.

If I wrote that “Hunger” post today, six years later, it would probably be called “Cravings,” or “Appetite.” I was being amused just this morning over thinking that a sign of a problem is often touted as “are you experiencing a loss of appetite?” You know what? I recall experiencing “loss of appetite” many times as a kid and young adult. My dogs experience “loss of appetite” about 3-4 meals per week. Is that really the key to not getting fat?

What I do think I have come to believe is that the more one eats, the more often, in company with a mentality that always has a hefty appetite, fat is in your future. Whatever the source of your insatiability, it’s not wild animal. It’s not human ancestral. It’s Neolithic. It’s Food Engineering. It’s a shiny new car three times per day. Day in, day out.

You’re welcome to disagree and go buy a keto meter and testing strips.

There’s an “intuition” put forth by some stupid people that feeding your gut is per se fattening, because the resident organisms don’t care, just want food, and so are going to motivate you to just eat (brain-gut connection). Well, such thinking does have the virtue of acknowledging CICO and ironically, brain-gut (only works 1-way, though). This is simplistic thinking by egregiously stupid people who’ve no concept of the constituents in the gut, as mentioned way above. Briefly, because too stupid, failing to take an overall big-pic look, fail to recognize the bugs are in perpetual chemical warfare, have an average of a 20-30 minute lifespan to do their thing, give off exotoxins when they die off, can share genes, can give off by-products that feed the gut and give off chemical-hormonal signals your brain understands and acts upon. It can go many ways, not just EAT MOAR! It can make you lose your appetite too.

There are good reasons to assume that sometimes, those brain signals can be a loss of appetite. Gut bugs invented the war of attrition.

So where do we go? What specific gut bugs do you need, in what quantities do you need them—when—and what is the timing, quantity, and formulation of their optimal food?

Let me lay it right out, explicitly:

– You don’t know anything, never will, and everything put forward by other stupid people is completely wrong. I’d be wrong to give you a solution. I care (like Tim Steele). They don’t.

You need to get yourself a shotgun. Saw off about 2 feet. Essentially, rather than trying to figure out what boutique bacterial strain out of potentially a thousand is going to do what you want, and what food is best for them, you shotgun it.

I have recently untaken a little comparison of the probiotics I like. There’s two new ones, the reformulated Primal Flora, already mentioned, and a crazy-super-high dose Elixa, out of the UK. Karl Seddon emailed me some months back.

I’ve been reading your blog a fair amount over the past few weeks. Mainly it’s quite memorable because of your entertaining, less-than-subtle way of wording your views and the (tongue in cheek) confrontational, call-out style of some of your posts. The humour is certainly appreciated over here in the UK, Ha! […]

My name is Karl and I am the creator of a probiotic called Elixa. It’s based on technology I developed over 3 years after graduating from university here in the UK. It’s very different from the standard probiotic supplement (it’s a short-course, it contains 500 Billion CFU per dose, and the encapsulation technology is what I developed after completing my studies in Biomedical Engineering at Oxford in 2011). I got interested in probiotics after my research (on my own IBS condition) lead me to a heap of scientific journal articles about gut microbiota. I realised that this area is not pseudo-science and yet there was still something greatly lacking in the effectiveness of all probiotics that I tried. It was actually fairly obvious where they lacked but the technical solution to that ‘obvious’ problem was very tricky. I still think that a lot of supplement manufacturers simply use the term probiotic based on its popularity/demand rather than their own sincere belief in the effectiveness (or potential effectiveness) of probiotics.

Anyway, after putting 3 years of my life into R&D for this problem, I have recently completed the development phase and begun full-volume production. I think that Elixa will change the pseudo-science reputation of probiotics entirely. Early feedback has been surprisingly awesome. It’s not one of those supplements where people are saying: ‘Er… yeah… I think it does something…’

My customers notice a definitive effect right from day 2/3, onwards (It begins with noticing improvements in their skin). They are in no doubt about it – to the extent that they email me to share their results. This is exactly what I had hoped for – A probiotic that can begin to fulfill what the scientific literature is insinuating (with regards to the huge potential probiotics could play in the future).

So he sent me four 3-day-dose rounds. I took the first over 3 days, the second about a week later; then, upon Karl’s recommendation, did the last 6 doses in a week. This is where it became very obvious to me to take them on an empty stomach, let things settle out, then eat when you’re truly hungry, later. Don’t be surprised if far from going back for 2nds, you very often leave food on the plate.

I dd a comparison of the brands I use. 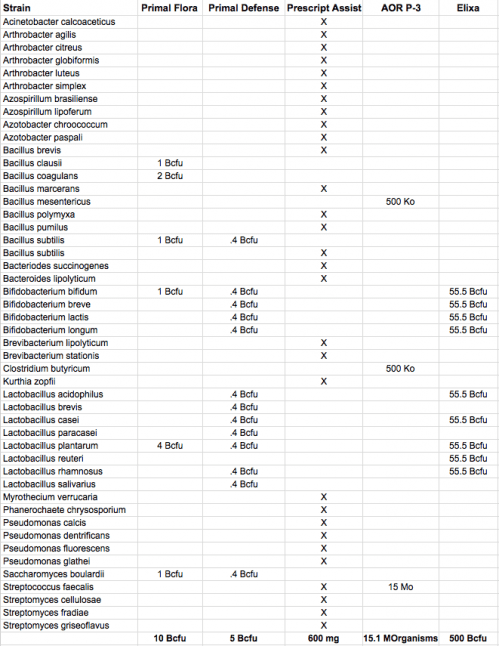 Here’s the PDF. Looks like about 50 strains amongst 15 genera. Who the fuck really knows what specifically does exactly what? And that’s The Point. Shotgun. BTW, a lot are spore formers, some aren’t. It’s a mix.

In terms of comparison, I really have to give Sisson props for being completely transparent. The only one that gives the specific strains and the CFU (colony forming units) for each strain (others I had to average, and PA only gives total mg). The others are trying to guard trade secrets, which is fine, but I guess Mark doesn’t feel the need to, because maybe the formulation changes again, over time, as he learns more. That’s the way to truly compete. Salute, Sisson! It isn’t the original Coca Cola recipe.

So, the basic procedure I’ve followed over the last month or so:

If you like a good shit, you might want to get Mark’s deal if for nothing else. 🙂

I know I have ways to go, but I’m not even using the scale because things just keep going in the right direction quite naturally, i.e., a loss of appetite. I did put up a photo a couple of weeks ago. Updates to follow.